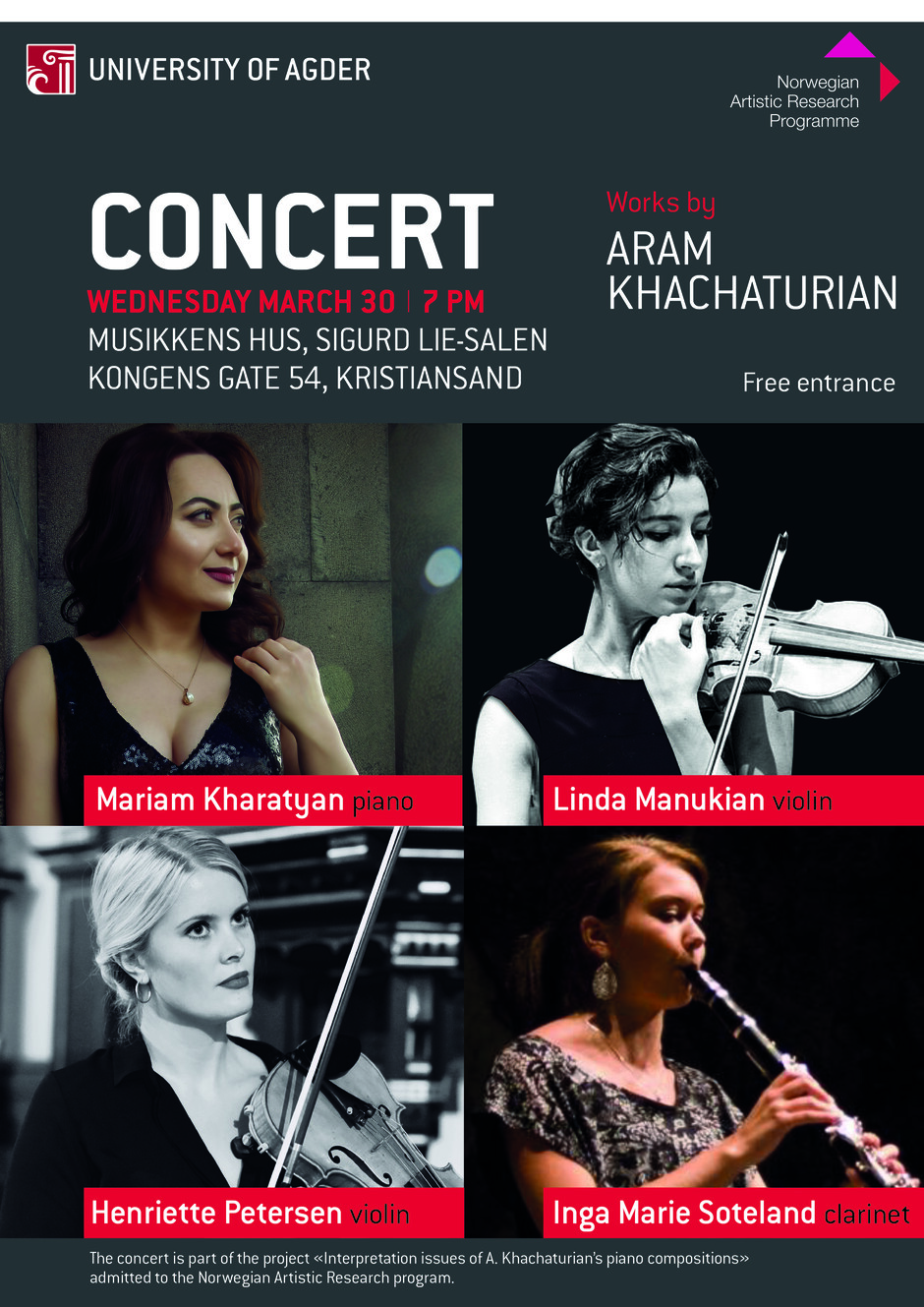 In March 30 Mariam Kharatyan, together with Inga Maria Soteland (clarinet),  Henriette Petersen (violin) and Linda Manukian (violin) held a Concert in Musikkens Hus, in Sigurd-Lie salen. During that event the audience had unique possibility to listen Solo and Chamber compositions written by Armenian composer Aram Khachaturian. Some of compositions such as “Valts-Caprice”, “Dance” and “Poem” from Concert’s program were written in Khachaturian’s early period of career, and rarely performed by pianists not only in Norway but also abroad.

The Concert was part of Mariam Kharatyan’s Artistic Research project - “Interpretation issues of A. Khachaturian’s piano compositions”. This project has been admitted to the Norwegian Artistic Research Program since October of 2015. This is first time when University of Agder has been represented in the Norwegian Artistic Research Program with a classical project.
M. Kharatyan’s approach to this project is from the point of view of a pianist performer and has aimed to focus of the different aspects and contexts of the interpretation of composer’s several significant piano compositions, such as Trio for Clarinet in B, Violin and Piano, Concerto in D flat Major for Piano with Symphony Orchestra, Song-Poem and Dance for violin and piano, also some compositions written for solo piano, such as the “Poem”, “Toccata” and “In the Folk Vein”.

M. Kharatyan recently included in program and performed in this Concert also “Lullaby” and “Dance of the girls with Tamburines” which has been rarely performed as solo piano arrangements from ballet “Gayaneh”, as well as world famous  “Adagio” from ballet “Spartacus” in concert arrangements for piano by outstanding Armenian pianist, Honored Artist of Armenia, Prof. Willi V. Sargsyan.

M. Kharatyan’s  research showed that in some of A. Khachaturian’s compositions contains also imitation of the sound of Armenian folk instruments, such as kamancha, tar, kanon, dhol etc. Her intention is to show that Khachaturian’s musical idiom has its deep roots in the Armenian folklore music, inspired from the rich traditions of folk musicians- Ashughs art and that generally his art is imbued with the spirit of Armenian national art.
The other aspect of her approach is to find out her own, individual way of the interpretation of Khachaturian’s above mentioned compositions, as well as to gain organic synthesis of all achieved information regarded to Armenian Musical Culture.

The project “Interpretation issues of A. Khachaturian’s piano compositions” is supervised by Dr. Fil. Professor Per Kjetil Farstad, University of Agder.

Here are responses from audience of  the Concert in Musikkens Hus:

-The first seven pieces showed amazing contrasts in style and emotion.
In the "Dance of the girls" you could imagine a scene from an Armenian fairytale of dancing girls.
The Adagio from "Spartacus" Ballet sounded like an entire orchestra playing in the piano.
The performance was at times delicate and at times had overwhelming energy.

We liked the trio for clarinet, violin and piano.
It was lively and vigorous. At times it sounded folkloristic
and even impressionistic. A friend claimed he could hear Debussy in the music....
The music from the two Armenian artists, Linda Manukian and Mariam Kharatyan, was ,from the beauty of the single note, to the entire composition unexpectedly divine.
Tone Lea, Cellist in Agder Symphony Orchestra