First on the ball

Norwegian football players are quicker than they used to be. But it is difficult to train oneself to become faster. 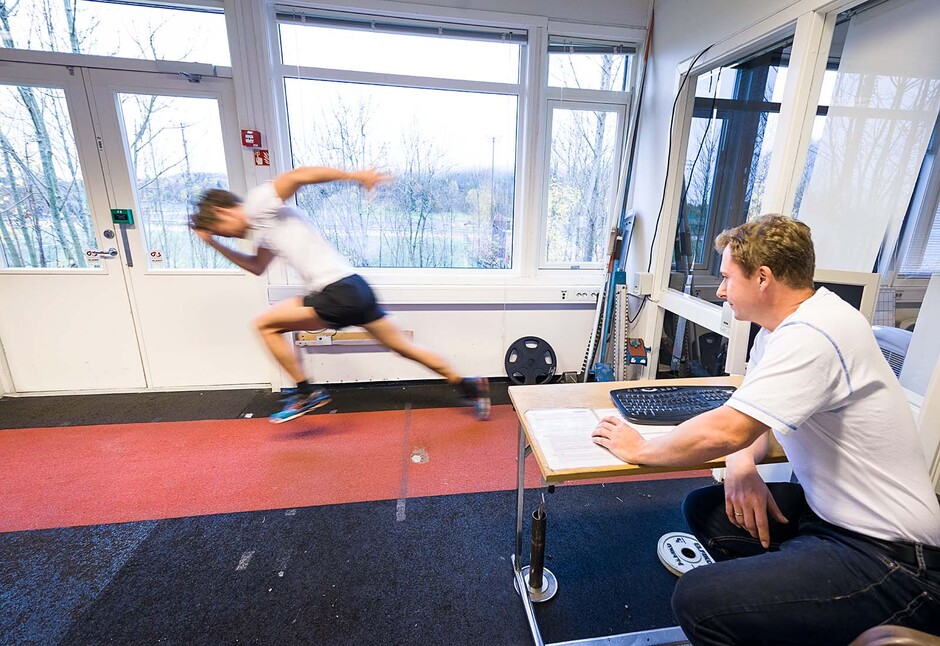 FIRST: Thomas Haugen works at Olympiatoppen in Oslo and was the first person to present a thesis at the doctorate programme at the Faculty of Health and Sport Sciences at UiA. (Photo: Kjell Inge Søreide)

Speed is one of the key qualities of a good football player. The higher the division you play in, the better are the players, and the quickest ones play forward. Thomas Haugen’s research confirms this. On the 12th of June this year, he gave the first presentation of the doctorate programme at the Faculty of Health and Sport Sciences at UiA. Thomas Haugen defended his thesis, The role and development of sprinting speed in soccer. The conclusion was that speed is important, but difficult to measure and difficult to improve.

Already in sixth grade, he learnt something about accurate timing. The teacher timed him to 6.9 seconds on a 60 metre run. That was a Norwegian record at the time. Haugen was quick, but not that quick. Apparently he got a head start of five metres, but he was quick enough to be put as a striker on the local football team. When the long passes came, he outran everyone. He gladly ran around the keeper as well. This led to many, quick goals before Thomas Haugen shelved his football and put on his athletic shoes. He sprinted on a high national level for several years and trained with express runners like Geir Moen.

In addition to being quick on his feet, Haugen has kept a high speed on his writing the last few years. He has authored or co-authored 23 scientific articles between 2011 and 2014. 17 of these have been with Professor Stephen Seiler, Dean of the Faculty of Health and Sport Sciences at UiA. Haugen have worked with both Olympiatoppen in Oslo and UiA during his doctorate work.

“At Olympiatoppen, we are practicians, so I have learnt everything I know about science from Stephen Seiler at UiA,” said Haugen.

Haugen has been a technical consultant at the training department at Olympiatoppen. He is responsible for the test database, the technique lab, tests of strength, leaping power and speed and training of athletes connected to Olympiatoppen. He could have done his doctorate thesis at the Norwegian School of Sport Sciences, just a stone’s throw from Olympiatoppen, but then there was UiA and Seiler’s guidance.

“Seiler has been an inspiration and he is the main reason I chose the doctoral programme at UiA,” said Haugen.

How important was football? In what way should football players train to become quicker? In what way can reliable measuring methods of speed be secured? These are the types of questions he has tried to answer in his doctorate work. The work consists of seven studies. The first two are about finding correct procedures for time measuring, comparing different equipment like for example single and double photocells during the timing, different starting methods and other technical and basic things about timing.

“The formalities have to be extremely accurate when you are conducting studies you want to compare with others,” said Haugen.

Studying methods and procedures is demanding work, but it has to be there. The conclusion of the two basic studies is that you have to be extremely accurate both with procedures and equipment for timing. If the research results are to be compared to others, the measuring methods must be standardised.

“The time measuring on a 20 metre sprint can be very different depending on how you measure the time. These are things you must know so that your findings can be compared to others. Different starting procedures and measuring equipment can influence the timing with as much as 0.7 seconds, and that points out how important it is that the timing is controlled,” said Haugen. 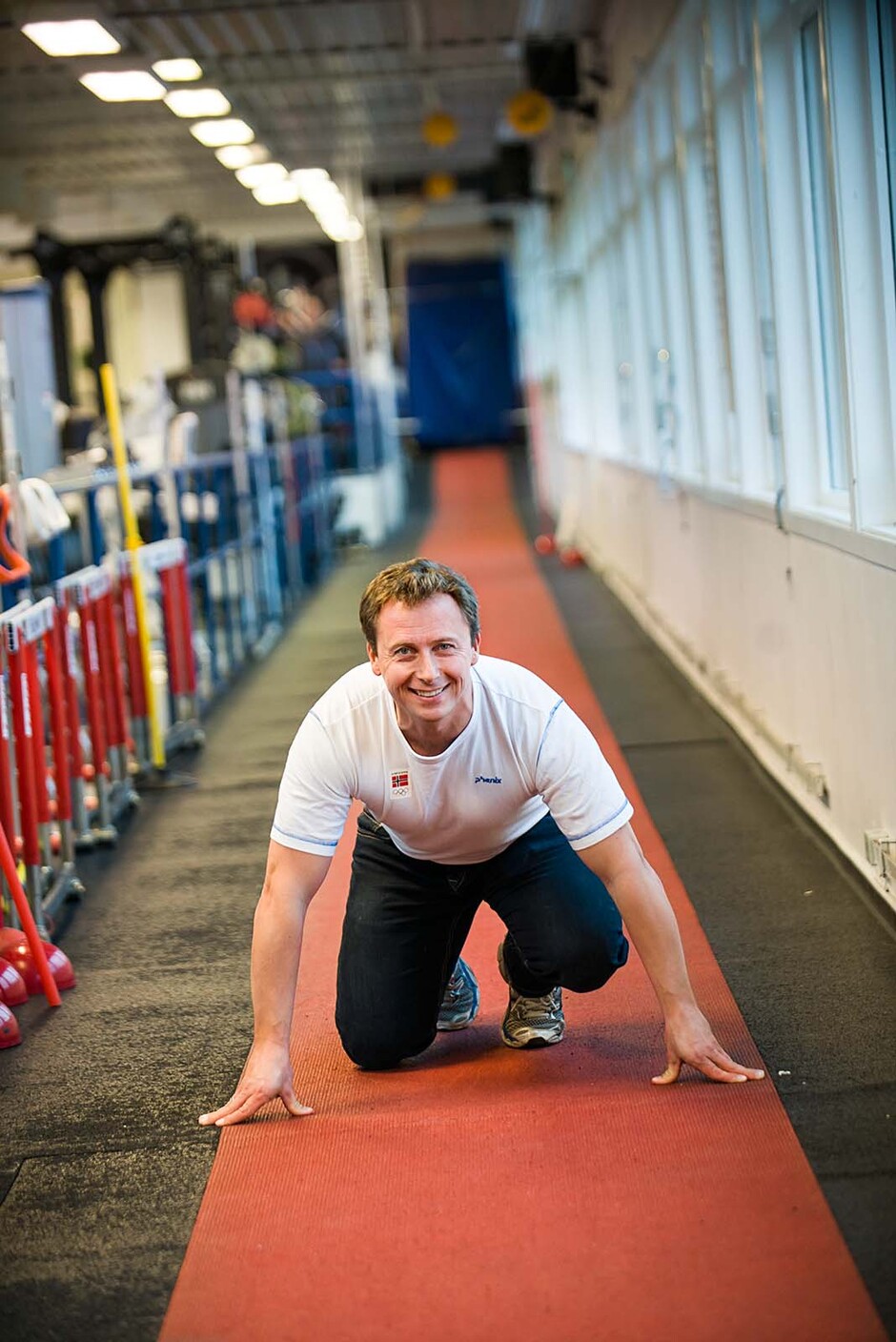 SPRINTER: Thomas Haugen is a former sprinter and has been training on an elite level along with sprint stars like Geir Moen. (Photo: Kjell Inge Søreide)

Haugen has made use of the database of football players between the 1990s and today. He has gone through the database and considered the players’ speed by categories like achievement level, field position, age, and development. Haugen has analysed women and men in each of their groups.

“The database confirms that if you are quicker you play on a higher level. That is an important documentation, which underlines that speed is a necessary quality for a top football player,” said Haugen.

The findings show that the strikers are the quickest, shortly followed by the back players. Only the keepers are slower than the midfielders.

“The difference between the strikers and the back players are small, only 3-4 tenths of a second. Midfielder are 7-8 tenths slower than the strikers,” said Haugen.

“We often hear it said that Usain Bolt has slow starts, but he’s not. He is one of the fastest men in the world, even on the first meters. - You’re not slow the first couple of metres and quick on the next. It doesn’t work that way. If you’re quick, you’re quick all the way.,” said Haugen.

When it comes to age and speed, the findings show a difference between boys and girls.

“Girls are quickest when they’re 16 or 17 years old and have no progress after that. Boys are quickest at 20, and about as quick until they turn 28. That’s when they stop progressing,” he said.

“We are not sure why, but we think it has to do with less use of traditional endurance training, for example longer trips, and more focus on speed training,” said Haugen.

You are born quick and it is difficult to improve by working out. This seems to be the discouraging conclusion of Haugen’s and others’ sprinting research.

“There are no training programs that work for everyone. Some might benefit from sprint training, others from building strength. But not everyone benefit from the same thing: sprint training has to be adapted to the individual. The literature on speed and speed training present contradicting answers on what  ways of working out that can make you quicker,” said Haugen.

“Which types of training methods work for someone if not everyone?” 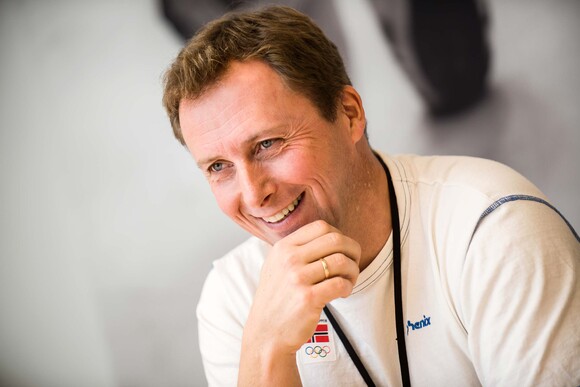 QUICK ALL THE WAY: “You’re not slow the first couple of metres and quick on the next. It doesn’t work that way. If you’re quick, you’re quick all the way.” (Photo: Kjell Inge Søreide)

“100 meter sprinters in Norway improve by 2 percent from the age of 18 and up until their best senior results. Those with the most extreme improvements, got 8-10 percent,” said Haugen.

In the final part of his research, Haugen used football players from The Norwegian College of Elite Sports and the best junior teams in Oslo.

“It is not usual to work out on a maximum when you do endurance or strength training, but the opposite is usual in sprints. The literature has always indicated to work on maximum intensity. I wanted to see if we could get the same result by training on a lower intensity combined with twice as many repetitions,” he said.

“The study showed no improvement or same improvement overall. This study confirms something I think we knew, that you’re born quick and that speed is difficult to improve by training. It could be just as efficient to remove a couple of workouts as to add one with sprint training,” he said.

“Should speed training be a priority among young football players?”

“My personal opinion is that you could work on running techniques while young, but I would not recommend training aiming to increase the resources for example by strength training. Football is about creating and closing space. Half a metre’s head start can be enough to create a goal-scoring chance. Half of all goals come from a sprint. But you obviously have to work just as much technique and tactics as on speed if you want to become a good football player,” said Haugen.