Assistant Professor and PhD Research Fellow Mariam Kharatyan interprets the Armenian national composer Aram Khachaturian in her doctoral work. And in September, she will partake in the Grieg Piano Competition at Troldhaugen. 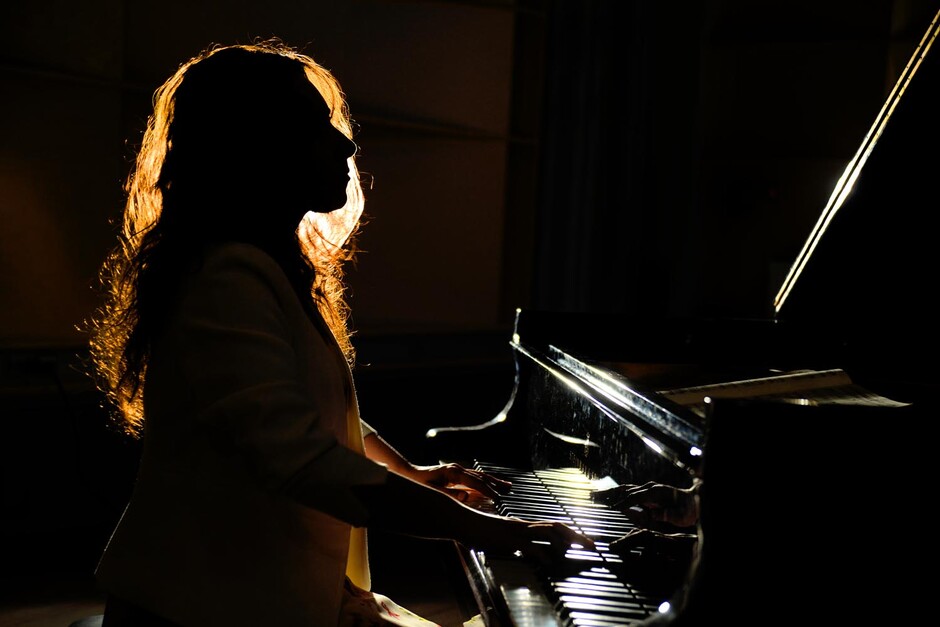 The Grieg Piano Competition for younger musicians in Bergen in September is highly profiled internationally, and very few are let in. Mariam Kharatyan was in the semi final in 2014. This year she is participating again. She also has strong results from several international music competitions.

At UiA, she teaches piano accompaniement at the Institute of Classical Music and Music Education, in addition to being the Istitute’s first externally financed PhD Research Fellow through Norwegian Artistic Research Programme. She has a Master’s degree in piano performance from Yervan State Conservatory after Komitas, with Associate Professor Areg Sargsyan as her supervisor, and a Master’s degree from UiA in piano performance in Western European music supervised by Tellef Juva and Sveinung Bjelland. Among the experiences she values personally is the master class she played with Leif Ove Andsnes in Grieg’s home, Troldhaugen, in the autumn of 2015.

In addition to teaching and research at UiA, she holds concerts internationally as a solo artist - but also plays chamber music, like in the Norwegian Youth Chamber Music Festival, which is this year hosted in Stavanger from 25 September to 2 October.

Her research work is on doctoral level and qualifies for promotion to Associate Professor. Her supervisor in the doctoral work is Per Kjetil Farstad.

“This understanding inspires my own interpretation of Aram Khachaturian’s music, which is an important part of my PhD Research project,” says Mariam Kharatyan.

Examples of such personal interpretations is what we had outstanding examples of in two concerts this spring - one in Musikkens hus in Kristiansand city centre and one in Sigurd Køhns hus at Campus Kristiansand.

Professor Konrad Mikal Øhrn wrote this on request about the concert in Sigurd Køhns hus at Campus Kristiansand:

It was a wonderful concert we got to witness in Sal 1. The pianist Mariam Kharatyan had brought in Adam Grüchot on violin and Stig Nordhagen on clarinet (both from Kristiansand Symphony Orchestra), and presented a selection of works by the Armenian composer Aram Khachaturian. The concert is a part of her doctoral work, where she immerses in interpretations of his compositions, which are largely influenced by Armenian folk music. The title of her research project is “Interpretation issues of  Aram Khachaturian’s piano compositions”. This work is a part of the Norwegian Artistic Research Programme on doctoral level.

In the first part of the concert, she presented solo pieces for piano where she got to show her full width in musical unfolding, both with fresh timbres, supple and crystal clear leap, as well as suttle and earnest passages. Most of the music was still powerfull and with rhythms leading the assosiations to folk music and folk dance.

The interaction of the closing trio for clarinet, violin and piano was beautiful, with rhythmical precision and musicianship underlining that we were dealing with three professional musicians who both know how to do it, and do it!

Mariam Kharatyan showed throughout the concert - as in many other settings - that she is an eminent pianist, as well as searching for new knowledge through her doctoral work. It takes a lot of concentration and work power to assert oneself in both these fields - the performing and the researching - and she shows that he manages both excellently!

Aram Khachaturian was born in 1903 and died in 1978. He was then a child and youth during the first decades after the last turn of century - a period considered the hardest in Armenian history, writes Mariam Kharatyan in the introduction to the concert, which was dedicated to the memory of the Armenian genocide, which peaked in 1915 with the arrest of 250 Armenian intellectuals in Konstantinopel (Istanbul). Among the arrested were Komitas, cf. Mariam Kharatyans first Master’s degree from Yerevan State Conservatory after Komitas. The musician survived, but did not compose for 20 years. He died in 1935.

The state of Norway does not use the term “genocide” for the mass murders.

From 1920, the Soviet Union took control of the eastern Armenia - which became the Republic of Armenia when the Soviet Union dissolved in 1991. Armenia and the neighbouring state, Azerbaijan, disagree on for example Nagoro-Karabakh, which has a mainly armenian population - but there are strong undertones of superpowers that can also cross in the scenic southern Caucasus. Se for example the article “Is Armenia the Next Turkish-Russian Flashpoint?” from the Washington Institute - a think tank established by the lobby organiation AIPAC - American Israel Public Affairs Committee (see Le Monde), or “Nagorno-Karabakh is not a localized conflict” from Al-Jazeera. The pressure around the local culture is not just historical then, but remains active.

The events contain a threat to the Armenian culture, especially the conflicts when Aram Khachaturian was young, and in this connection, the musical tradition in particular.

“It is of utmost importance that a distinguished name in music still can bring the Armenian musical heritage and tradition out in the world. Aram Khachaturian has not only done that, but he also brought European musical tradition into the Armenian through the first Armenian symphony, ballet and trio. The harmonies, intonation and generally the spirit of his music, filled with Armenian folklore in all its variations and forms,” Mariam Kharatyan writes in the consert review.

She has found sound imitations of Armenian folk instruments in Aram Khachaturian’s compositions, like kamancha, tar, canon and dhol. The pieces in the consert are live examples of the organic melting together of the classican genres and musical content inspired by Armenian folk music.

See more about Mariam Kharatyan on: