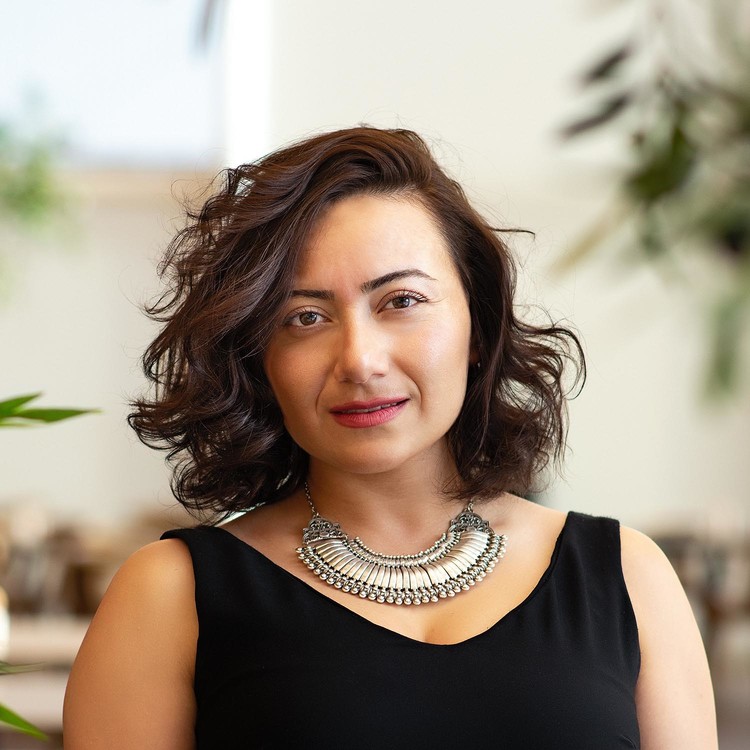 I was in search of what interpretational possibilities might emerge in works by Komitas and Khachaturian when listening to Armenian folk music and responding to it through musical expression in classical pianism?

The disputation will be held digitally, because of the Corona covid-19-situation. Spectators may follow the disputation digitally - more information and link down below.

Mariam Kharatyan at the Faculty of Fine Arts has submitted her artistic research project «Armenian Fingerprints - interpreting the piano music of Komitas and Khachaturian in light of Armenian folk music» and will discuss it with the assessment committee Tuesday 28 April 2020. The disputation is held digitally - links at the bottom of the page.

Mariam Kharatyan, piano - an introduction to the artist

She has her musical background as a classical pianist and completed her Master's degree at the Komitas State Conservatory in Yerevan, Armenia.

She is a prize winner in several international piano competitions such as “Giovanni Musicisti” (1st Prize, 2013) in Treviso, Italy, Grieg International Piano Competition in Bergen (Semifinalist, 2016), and in the “Renaissance” International contest-festival in Gyumri, Armenia, in 2010.

From 2015-2019 she has worked on the project Armenian Fingerprints - interpreting the piano music of Komitas and Khachaturian in light of Armenian folk music, admitted in Norwegian Artistic Research Programme. In 2019 she has released two albums with Simax Classics - Khachaturian, Chamber Music and Komitas, Shoror.

Summary of the project by Mariam Kharatyan:

Throughout this artistic research project, I have aimed to find my own way of interpreting several major piano compositions written by the Armenian composers Komitas (1869-1935) and Aram Khachaturian (1903-1978). My approach to interpretation has been connected to my inspiration and interest in Armenian folk music, leading to a desire to explore in-depth the impact of the interplay between classical and folk music in my playing.

I was in search of what interpretational possibilities might emerge in works by Komitas and Khachaturian when listening to Armenian folk music and responding to it through musical expression in classical pianism?

My response from folk to classical aesthetics has recreated my imagination and inner perception of folk music into timbres on the piano. I have aimed to refine this imagination of the folk instruments and folk music aesthetics and integrate it in my piano playing, intended to unfold new perspectives to the established approaches of interpretation.

At the Crossroads of Classical and Folk

On the album Shoror, the music of Komitas is interpreted at the crossroads of Armenian folk music traditions and European classical style. In selected folk songs of Komitas, I had Vigen Balasanyan - one of the finest folk musicians from Armenia, playing on traditional instruments duduk and blul. Playing on grand piano together with ancient Armenian folk instruments, created a soundscape that re-evokes the folk sonority and expression of the music.

Besides collecting and arranging Armenian Peasant Songs, Komitas has been also focused in particular on the instrumental music that was played during folk dances, creating his famous Yot Par and Msho Shoror for piano. The roots of each dance-melody are from a particular region of Armenia and is marked by Komitas in style of folk instruments/ensemble of folk instruments. The Yot Par and Msho Shoror has been in my focus during the whole project, exploring the aesthetics of the folk music and traditional instruments, through articulation, timbre, timing and pedalling on piano.

The album Komitas, Shoror is presented by Simax Classics

On the album Khachaturian, Chamber Music, interpreted composer's music written as early as 1926, and also the neglected violin sonata, written in 1932, but published only in 1984. One of the cores in my explorations on aesthetics of Armenian folk music and the interplay of it in my piano playing has been the improvisational free timing of folk troubadours - Ashugh’s Art. Together with violinist Adam Grüchot, clarinetist Stig Nordhagen and cellist Leonardo Sesenna, we have aimed to create a meaningful musical expression for the listener, as the music comes forth more like an improvisation, as without bar lines, with the freedom and improvisational sense of the performance which would give the impression of as performers playing by ear, rather than by learning.

The album Khachaturian, Chamber Music is presented by Simax Classics
The album is also on Spotify

One of the artistic results of the project has been the performance of Khachaturian's piano concerto that took place in Kilden Teater and Konserthus, in collaboration with Kristiansand Symphony Orchestra, conducted by Eivind Gullberg Jensen.

This concert has been live recorded and is available to listen in YouTube.

Armenian Fingerprints are published in the Research Catalogue, which is an International Database for Artistic Research.

Because this is a Norwegian Artistic Research Programme disputation, the procedures are a little different to conventional PhD disputations. Here it is a dialogue where the candidate and the assessment committee discuss the project, moderated by the disputation chair, dean Marit Wergeland-Yates. The disputation is held digitally.

The Candidate: Mariam Kharatyan, (1987, Yerevan, Armenia) currently working as Assistant Professor in a permanent position of Piano Accompaniment in the Department of Classical Music and Music Education at the University of Agder.

Title on the artistic research project: «Armenian Fingerprints - interpreting the piano music of Komitas and Khachaturian in light of Armenian folk music»

We ask audience members to join the virtual dialogue in the Zoom conference program at 11:25 a.m. at the earliest. After this time, you can leave and rejoin the meeting at any time. Further, we ask audience members to turn off their microphone and camera and keep them turned off throughout the event. You do this at the bottom left of the image when in Zoom. We recommend you use ‘Speaker view’. You select that at the top right corner of the video window when in Zoom.

The chair invites members of the public to pose questions ex auditorio in the introduction to the public defense, with deadlines - in this case before the break ends - that is before 11:30. Questions can be submitted by e-mail to the chair Marit Wergeland.