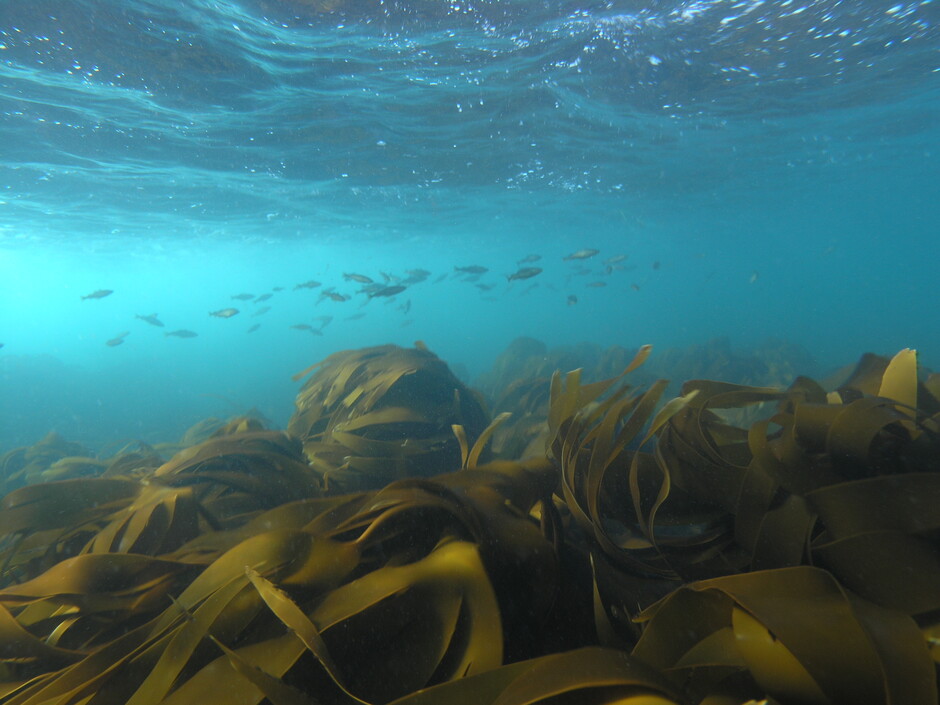 Researchers delve into the depths

Development, overfishing, and climate change threaten the coastal zone. Researchers are joining efforts to better understand how species and ecosystems react to these challenges. 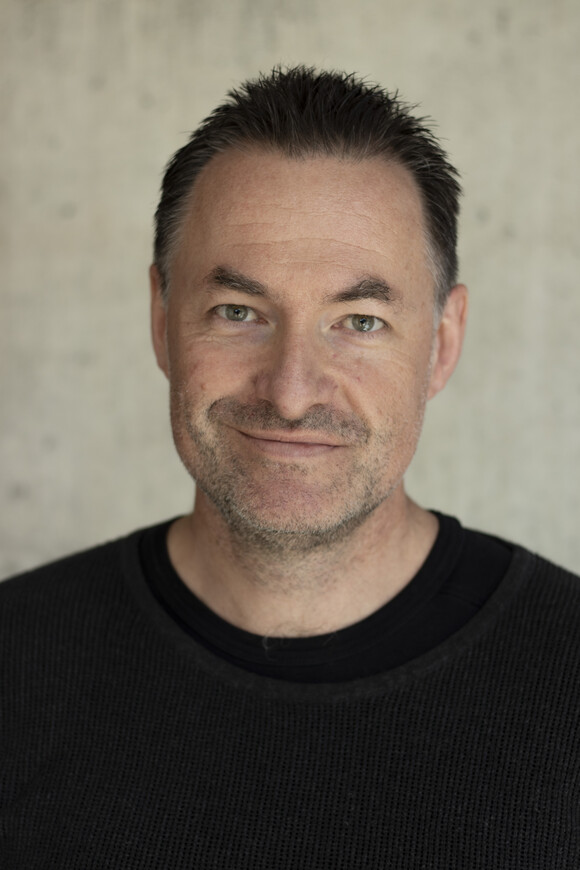 Halvor Knutsen, leader of the Centre for Coastal Research.

“During recent decades, we see that the coastal zone, more than any other ecosystem, is threatened by human influence. Drainage from agriculture, urbanisation and pollution are some of the reasons behind this,” says Professor Halvor Knutsen, leader of the Centre for Coastal Research (CCR) at UiA.

Knutsen and 30 researcher colleagues at the centre carry out research into what happens in the ocean along the coastal zone. Together these researchers are characterizing ecosystems on all trophic levels, including a broad range of species. Cod, wrasse, lobster, trout, salmon, eel, bacteria, plankton, sea grass, kelps and oysters are some of the many organisms being studied. The researchers hope that their results can help solve some of the challenges of the coastal zone.

“Human intrusion and developments destroy vulnerable biotopes along the coast. Overfishing reduces species and biological diversity and alters the ecosystem structure in the ocean. Climate change leads to increased pressure from the other more directly human influences,” says Knutsen.

The researchers’ objective is to increase insights into how changes along the coast affect organisms, species and ecosystems.

“At the same time, we have to look at how we can restore the ecosystem, or reverse and reduce the effects of climate changes,” says Knutsen.

Facts - Selected projects from the Centre of Coastal Research

Together with research into cod in the coastal zone, these are some of the current research projects related to the centre:

Ecogenome: A genetic mapping of a range of coastal species in Norway (sea grass, fish, shellfish). In the project they examine what drives the division into parts and what adaptations they make in the marine ecosystem.

MarGen II: The project is newly funded and shall, in collaboration with Swedish and Danish research networks and marine industries, work with issues that the business sector in the country are concerned with. For example, this helps the fish farming industry with knowledge about profitable and secure sustainable solutions.

Life History, Genetics and Sustainability of Atlantic Cod: Generates knowledge about the adaptations of species to climate change. Cod is used as a model species. The methods they use are advanced DNA analyses and statistical tools.

Fewer cod along the South Coast

The marine researchers call cod a key species. If it disappears, there will be considerable consequences for other species in the ocean. 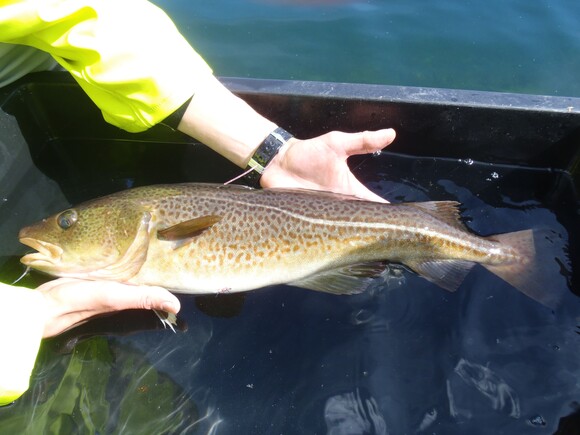 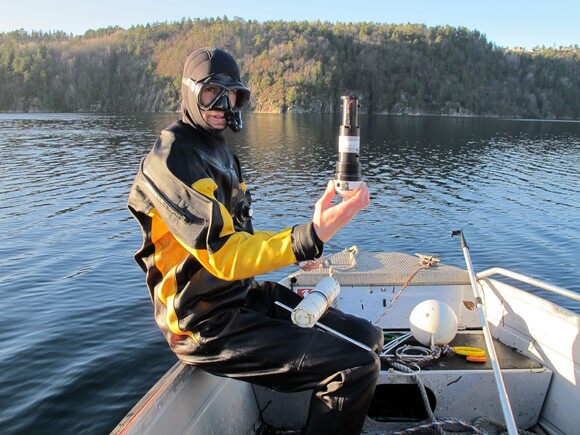 The researcher Even Moland from the Centre for Coastal Research changes batteries and downloads data from a so-named listening buoy. The buoy can say something about how the species behave and move.

The researchers have looked at the distribution of cod in Skagerrak. They have found that the North Sea Cod and the local fjord cod are genetically distinct. They have tested the DNA and marked the cod and other species in order to keep a watch on how they behave and who fishes them. The local fjord cod remained within a smaller area, whilst North Sean cod have larger areas that they move through.

In recent years, both marine researchers and a number of Norwegians from the south have been concerned about the cod stock on the south coast. There are increasingly smaller numbers of coastal cod, and the researchers are attempting to find out why they are gone.

“There can be a number of reasons why there is less cod. The ocean is becoming warmer, and cod do not react well to this. Climate change gives us an ocean temperature of 16-17 degrees and above in the summer. This means that the cod move further down into the deep. There, there is not as much food as there is nearer the surface,” says Knutsen.

Temperature and access to food changes for the juvenile cod too when the plankton environment changes.

“When the basis of existence is somewhat reduced for the cod, then the cod stock in the fjords of South Norway become vulnerable to fishing from professional and amateur fishers,” says Knutsen.

“On the Swedish coast, there have been drastically reduced numbers of cod along the coast in the last 20 years. Similar tendencies have been observed on eastern parts of the coast in Sørlandet,” says Knutsen.

In some areas in Kragerø, there are now restrictions on angling for cod in the spawning season.

Amongst other things, the researchers in Flødevigen have collected data pertaining to species along the coast of Norway since 1919 with the assistance of a beach seine . The beach seine has a form which resembles a large net, and is drawn at more than 130 locations  from Vest Agder to the Swedish border. This brings in species abundance data covering the entire coastline, providing a unique information source on what exists in the ocean and the changes that occur over time.

By comparing finds from the beach seine survey from year to year, the researchers now see changes in the diversity of species along the coast.

“In the beach seine, we now see for example several thermophilic species and species from southern regions which we have not seen before. Changes in the make-up of species in the ocean can lead to particular species not getting the food that they need to survive. Then we could risk that the composition of species in the coastal zone changes, and that today’s central species become reduced, or disappear completely,” says Knutsen.

Many of the students taking the master’s programme in Coastal Zone Ecology at UiA connect their practice to the coastal research centre and Flødevigen’s facilities. There, they have a DNA lab for genetic analysis, and equipment that can give indications as to how the species move and behave.

The study was commenced in autumn 2018. With 50 applicants for 20 places in its first year, there is no doubt that it has become popular. The students learn about how human activities affect the ecosystem along the coast.

UiA, the business sector in the region, and the research environment connected to the centre, collaborate closely with the master’s programme. 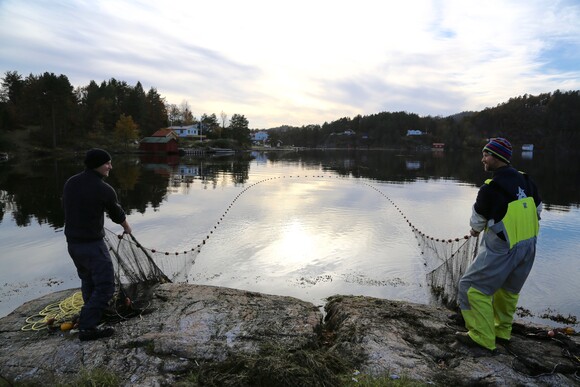 The beach seine is a good information source about what can be found in the ocean.

In recent years, a great deal of work has been put into establishing a strong network within coastal zone research in Southern Norway. UiA, the Institute of Marine Research in Flødevigen, the University of Oslo, the Norwegian Institute for Water Research, GRID Arendal and the county and town municipalities in South Norway are central actors.

Now, the centre has assumed a position at the region’s crossroads within coastal zone research.

“We have members from all relevant institutions in South Norway. The Institute of Marine Research shall deliver research-based advice for coastal zone management. In this case, it is important that we collaborate well and deliver solid research which helps them,” says Knutsen.

The priority research centres are prioritised by UiA according to the results that they have already achieved, coupled with their ambitions for further development.

The centres are to have national and international ambitions, and shall work according to the university’s strategy. With the award of this status, emphasis is placed upon external funding and gender balance.

The status involves funding to the tune of 10MNOK over 5 years. The centres also receive two extra recruitment positions and funds for infrastructure. 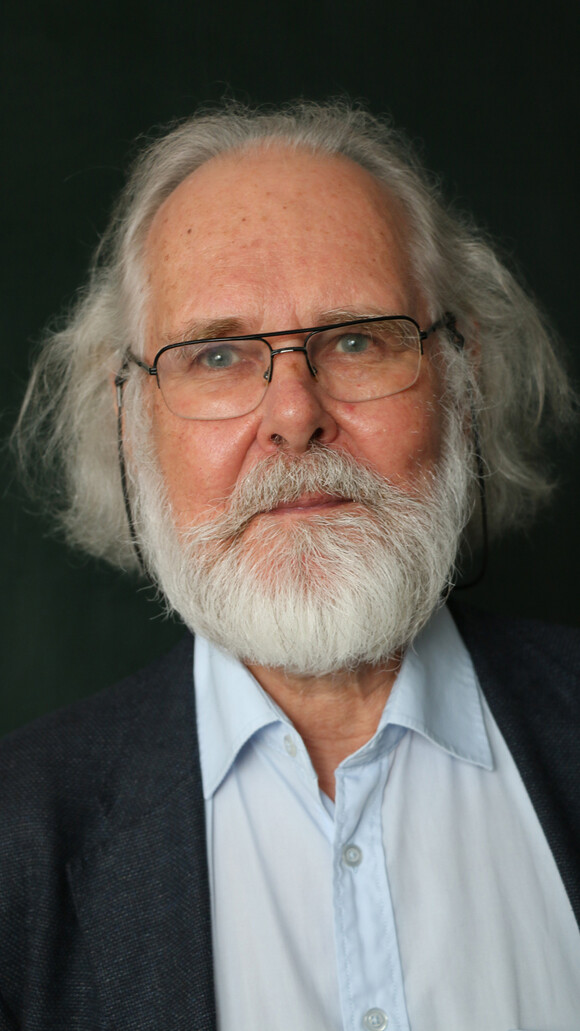 UiO professor Nils Chr. Stenseth is chairman of the Centre for Coastal Research.

In the autumn of 2018, the university board at UiA agreed that six research centres would be awarded the status of priority research centres. The Centre of Coastal Research is one of these. The status is accompanied by funding for five years. This was well-appreciated, according to the leader.

“The status as a priority research centre has given us a stronger academic reputation. In addition, we now have the chance to develop more general knowledge about how things are going in the coastal and ocean areas right outside our windows,” says Knutsen.

Professor Nils Chr. Stenseth from UiO is the chairman of the board for the centre. He explains that the concentration from UiA means a lot for the further development of the centre within marine research and education in Agder.

“The centre is a powerful investment from UiA’s side, and involves a wonderful basis for widespread collaboration with many institutions in the region, including UiO. The research environment has a high level of ambition in terms of research and publication,” says Stenseth.