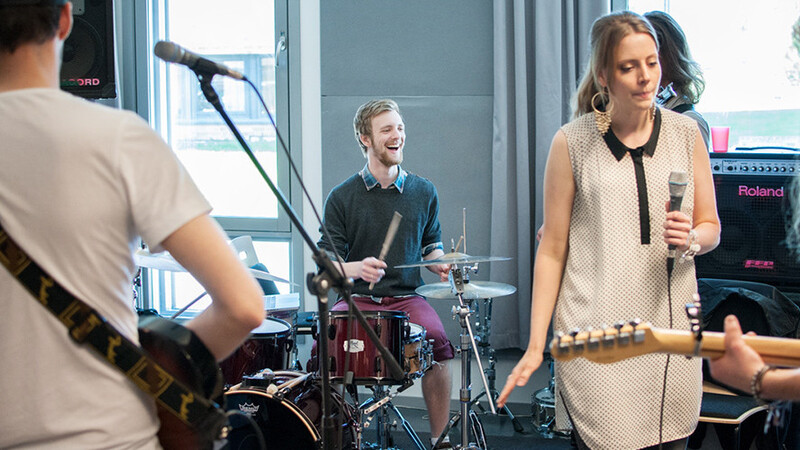 The research group Popular Music Studies is involved in various projects. Some over many years and involving international partners, others are shorter and with national/regional focus.

Recent years have resulted in extensive changes in popular music production, dissemination, reception, and perception. New technological developments within music production and performance have created new creative possibilities for artists and bands as they make music and engage with the global music market. Many of these changes have been greatly accelerated by, if not the direct result of, the Covid-19 pandemic that has fundamentally disturbed the relationships between artists, fans, modes of performance, and music distribution. More than ever before, it has become critical to examine digitization, virtuality, creativity, and the music business as a whole in the context of such tumultuous changes.

Thus, a two-day conference on new perspectives in popular music research will be held by the Department of Popular Music, Faculty of Fine Arts, University of Agder (UiA) in cooperation with the Popular Music Research Unit at UiA. The overarching goal of this conference is to address new perspectives on popular music through the lens of these recent changes and the perceived turmoil (and benefits) that has resulted from them. This marks the fourteenth anniversary of our PhD programme in popular music performance and provides an opportunity to showcase work by former graduates, current PhD candidates, and scholars associated with music research within the broad field of popular music studies. Two international keynote speakers will frame and contextualize the event. Keynote speakers: Dr. Ruth Dockwray, University of Chester, Great Britain; Prof. Martin Cloonan, University of Turku, Finland.

Michael Rauhut: The core idea of this project is to analyze the role of popular music in a religious context – in the past, present, in different countries. To what extent do theological and socio-political messages circulate through music, what are the interests behind the symbiosis of popular music and the Church? The network involves scholars from several European countries, including Norway, Finland, Denmark, Holland and Germany. Main cooperation partners: Departments of Musicology and Theology at the University of Siegen.

Michael Rauhut: This project is focused on the role popular music has in dictatorial systems. The main issues include: youth cultural dimensions, art and subversion, socialist production conditions in the field of popular music. A new subproject (since 2019) is focusing on the topic "Popular Music and Migration." The aim here is to examine, from both a historical perspective and on the basis of current processes, how political and social conditions affect the creativity of musicians in the field of popular music. The number of cooperation partners is constantly growing; it mainly includes Eastern European colleagues. A continuous and long-term cooperation exists with: Departments of Musicology at Palacký University Olomouc and Goethe-University Frankfurt am Main, Popakademie Mannheim.

In the period of 2007-2012, Kristiansand and the University of Agder hosted the annual Roundtable Conference, lead and initiated by Peter Jenner and Bendik Hofseth. The events offered an arena for debate and discussion among people with insights and positions to influence the music industries digital progressions. The Kristiansand Roundtable Conferences were by invitation only and the talks were held under Chatham House Rules.

The Chatham House Rule simply states that while everything in the talks can be used for further work and debate, nothing of what is being said can be attributed to any participants. These frameworks have been critical for allowing discussions on sensitive and difficult matters and it has been an important premise for why the Kristiansand Roundtable Conferences became an important meeting-place for people in the music business, digital tech-companies, academic researchers and policy makers and legislators.

After a break for three years, the conference has started up again in 2016, successfully located prior to Sørveiv In 2017, Billboard Magazine was represented, reporting back from the event with this piece.

An alumni two-day symposium on new perspectives in popular music will be held by the Department of Popular Music, Faculty of Fine Arts, University of Agder. This marks the tenth anniversary of our PhD programme in popular music performance, and provides an opportunity to showcase work by former graduates, current PhD candidates, and scholars associated with music research within the broad field of popular music studies. A keynote address by professor Keith Negus will frame and contextualize the event.

The research group’s main objective is to facilitate research and academic excellence within the field of popular music studies. It serves as a forum for academic discussions, the development of and cooperation around research projects, and the dissemination of research in the field of popular music. The approach is interdisciplinary: We understand Popular Music Studies (PMS) as a multi-faceted arena including different research disciplines, strategies and traditions. Popular music is considered as a complex aesthetic and social phenomenon which is inextricably linked with industrial processes. This entails the study of the aesthetics of music, as well as the economic and technological frameworks which music is created within. PMS is an international research group where focus of research, the networks of our members, and the impacts of our work are primarily international.

Our ambitions are (1) to have a growing academic impact on the research field by publishing state-of-the-art research through top-level academic journals and book series. And (2) to have growing relevance to society by increasingly being a favored partner in projects, host for events and source of knowledge and analyses.

Since 2014 Daniel Nordgård and the University of Agder has been part of the COST network Dynamics of Virtual Work, which researches the impacts from digitalization on work conditions and framework. The project can be looked at on the Cost.eu homepage and here: http://dynamicsofvirtualwork.com/

The project’s final conference was held in Vilnius, Lithuania the 14-16th of September: http://dynamicsofvirtualwork.com/final-conference-vilnius-14-16-septembre-2016/

Leaders of the group