UiA researchers are now developing a safe and fast method for disassembling used electric car batteries and preparing them for reuse. 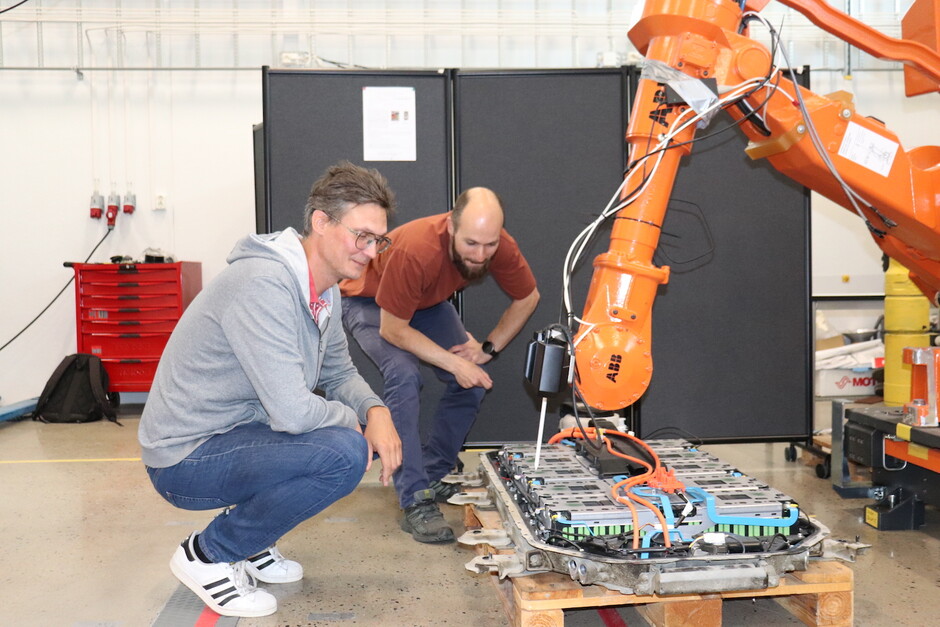 Ilya Tyapin (left) and Martin Choux check that the fine-tuned robot gripper works as it should.

“As far as I know, this is the first time that anyone in this country has managed to sort the different types of plastic from used electric car batteries”, says Associate Professor Martin Choux at the University of Agder (UiA).

The sorting of plastic is only one of the sorting processes to be automated.

“The aim is to automate and streamline the disassembly of electric car batteries, sort the components and prepare them for recycling”, Choux says.

Before the batteries are disassembled, they are discharged, and the residual energy is stored for future use.

The research project was a collaboration with Norsk Hydro, Elkem Carbon, Batteriretur and Glencore Nikkelverk among others and was funded by the Research Council.

The robot grippers that Tyapin and Choux use to sort the battery components have been fine-tuned to such a degree that they can distinguish the different types of plastic used in the cells and modules of electric car batteries.

When the robot arms are capable of separating different types of plastic and extracting them from the battery, it also means that important materials such as manganese, lithium, cobalt, copper, aluminium and nickel are recycled more efficiently using less energy.

“The recycled mass we get is free of plastic particles and there is less sorting afterwards. About 40 per cent of the content is sorted in advance”, Choux says.

The new method carries out automatic disassembly of electric car batteries using robots with fine-tuned gripping arms. The robot is in turn controlled by an advanced 3D camera with artificial intelligence. Before the robot gripper arms start to disassemble the electric car battery, the artificial intelligence has detected all the battery parts and calculated their exact location.

“The disassembly must be done in the correct order which differs between the around 300 types of electric car batteries that exist. When disassembling, you never quite know the condition of the battery. The artificial intelligence must be precise to detect whether the battery is dirty, how it functions and whether it has been partially damaged before disassembly starts”, Tyapin says.

Martin Choux and Ilya Tyapin are members of UiA’s mechatronics environment. For several years now, researchers there have been working on various methods for dismantling, sorting and reusing electric car batteries.

Choux and Tyapin have also benefitted from the many years of experience the mechatronics environment has in the use of artificial intelligence and automation as well as the development of robotic cranes for the offshore and oil industry.

The research environment will be an important contributor to the development of the Battery Coast in Agder, which is a collaboration on sustainable research and industrial development between UiA, Morrow Industries, Elkem and other companies and public actors.

Half a million electric cars and more than 300 battery types

The background for the project is, among other things, that half a million electric vehicles are expected to be on Norwegian roads by 2025. And when more and more used electric car batteries need replacing, methods to effectively handle the disassembly and reuse of large quantities of used batteries will be needed.

There are more than 300 electric car battery types. None of them are exactly the same which is they must be handled in different ways. In the case of manual disassembly, each battery takes two people around 45 minutes. Disassembly is also associated with the risk of explosion and the risk of leakage of toxic materials.

“The aim is for our method to be effective and safe. The disassembly is automated and must be able to effectively handle large volumes of electric car batteries”, Tyapin says.

The method has been tested in the mechatronics lab at UiA. The tests results have been good on batteries from two different cars. Using sophisticated robots and artificial intelligence, the method should quickly be able to adapt to all other types of electric car batteries.

They are looking for an artificial intelligence solution that is flexible enough to handle the electric car batteries on the market today but also adapt to the electric car batteries of the future. They will look into this in more detail in a new research project starting this autumn. Choux and Tyapin have been awarded another NOK 8.5 million from the prestigious Horizon Europe project, the EU framework programme for research and innovation.