Assessing the consequences of Brexit on EU policies, institutions and members, this book discusses the significance of differentiation for the future of European integration.

This book theoretically examines differentiated integration and disintegration, focuses on how this process affects key policy areas, norms and institutions of the EU, and analyses how the process of Brexit is perceived by and impacts on third countries as well as other organizations of regional integration in a comparative perspective. This edited book brings together both leading and emerging scholars to integrate the process of Brexit into a broader analysis of the evolution, establishment and impact of the EU as a system of differentiation.

This book will be of key interest to scholar and students of European Union politics, European integration, Brexit, and more broadly to Public Administration, Law, Economics, Finance, Philosophy, History and International Relations.

10. Governing a ‘post-Brexit’ Europe and the Case of Norway: Integration without membership in an affiliated state

12. Differentiated (dis)integration in Europe and Beyond: Historical and comparative perspectives 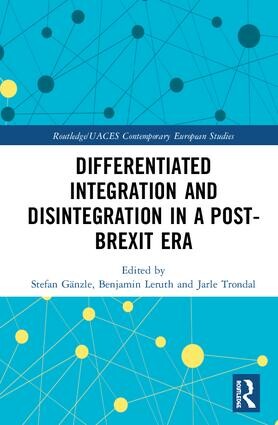