Welcomes Norwegian students to the UK

Even with a hard Brexit, the British Ambassador to Norway, Mr Richard Wood, thinks that student exchange from Norway will continue as before – both for degree students and Erasmus students. 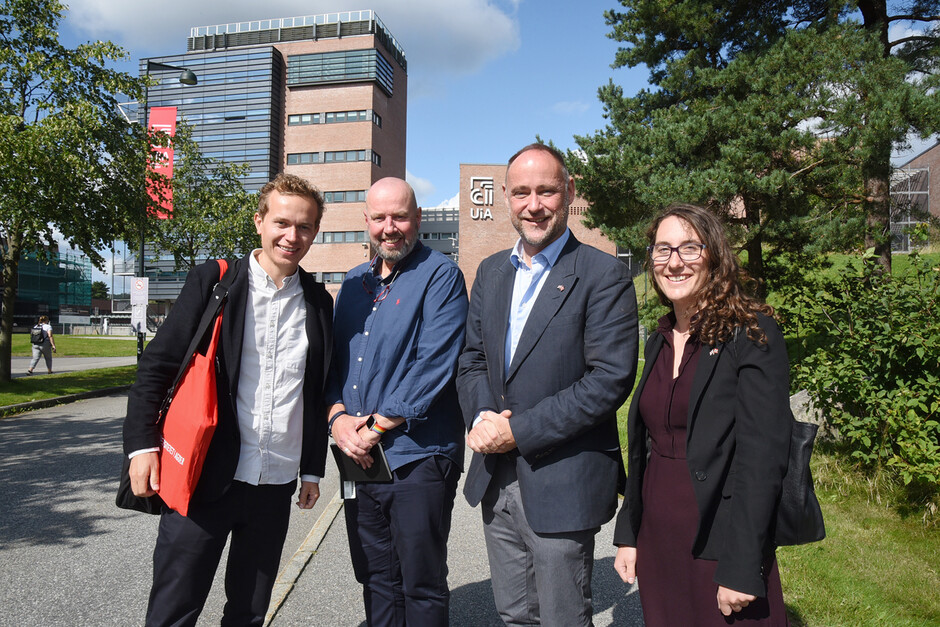 “Nobody wants anything else. Student exchange and academic cooperation is wanted both by Britain and Norway. And should we leave the EU without a deal this autumn, I am convinced we will both cooperate well to make sure everything concerning this, and other areas of cooperation, will continue and develop in the future”, Mr Richard Wood says.

The ambassador from Britain went to Southern Norway on Tuesday and Wednesday to take part in ‘Arendalsuka’, but he also found time to visit the University of Agder’s Kristiansand campus before heading back to Oslo. At UiA, he met with UiA’s Britain expert, Associate Professor Jan Erik Mustad, and Associate Professor Thomas Henökl at the Department of Political Science and Management.

“My recommendation to everyone who wants to study in Britain is to do so – either to take a complete degree or as part of the Erasmus programme. We have good universities, some of them are among the very best in the world, and they will continue to be so both before and after Brexit”, Richard Wood says.

The talks with Ambassador Richard Wood touched upon a number of things in the relationship between the UK and Norway.  For Norway, now that the British prime minister has promised that the UK will leave the EU by 31 October, with or without a deal, there is most concern how Brexit may affect trade between the two countries.

The UK is one of Norway’s largest trading partners, and it is feared that a hard Brexit would have a negative ripple effect on the sale of oil and gas, the service and supply industry and also the fishing industry.

“I am convinced that the good trade relations with Norway will continue regardless of how we leave the EU. None of us is interested in anything else”, Mr Richard Woods says.

“Admittedly, a hard Brexit would lead to more work connected with trade agreements, but both we in Britain and you in Norway have had time to prepare for what is happening. There is a lot of goodwill between us, and that will continue whether we are in the EU or not”, he says.

Shows goodwill in letter to UiA

The goodwill the ambassador refers to is also reflected in UiA’s relationship with its partner universities in the UK. Head of the International Education Office Aase Galteland tells that UiA has received communication and letters from a number of UiA’s exchange partners in the UK with assurances that they want continued cooperation, regardless of whether they leave the EU with or without a deal, to ensure student and teacher exchange.

“Of course, we are very pleased that they want to continue our good cooperation. But still we have to tell our students that no formal agreements exist to guarantee Erasmus+ grants to students who are not already on the exchange programme ahead of Britain’s exit from the EU”, Aase Galteland says.

“For students travelling to the UK this autumn everything is in order. But for those who want to travel in spring 2020 or later, we still don’t know much”, she says.

30 percent fewer want to go to the UK

Insecurity in connection with Brexit and student exchange has resulted in less interest in the UK as an exchange destination among students at UiA. The number of Erasmus students from UiA going to England, Scotland and Northern Ireland is 30 percent lower this year than last year – and the past four years .

The trend this year is that countries in Scandinavia, South America and Asia increase in popularity, while the UK is less popular”, Senior Advisor Aase Galteland explains.

However, she emphasises that the big drop in student exchange to the UK cannot with certainty be said to be due to insecurities related to the Erasmus scheme and Brexit. What is popular varies a little from year to year, but she also says she would be surprised if Brexit insecurity had no part in it.

Mr Richard Wood’s visit to UiA was his first since his appointment as Britain’s ambassador to Norway one year ago, in August 2018.

“But it is probably not the last. UiA is a great university and I will be sure to come back”, he says.

The British ambassador has a university degree in European Politics (1990) from Leeds Polytechnic, which today is part of Leeds Beckett University – one of the universities in the UK where the University of Agder has most exchange opportunities for its students.

Students in these UiA study programmes can go on exchange to Leeds Beckett University: