“Vrimlehallen” is being upgraded to a workshop for co-creation

Vilhelm Krags hall –Vrimlehallen– central to Campus Kristiansand, is being upgraded this fall, and will be ready at the start of the spring semester 2018. The work starts Monday on November 4. 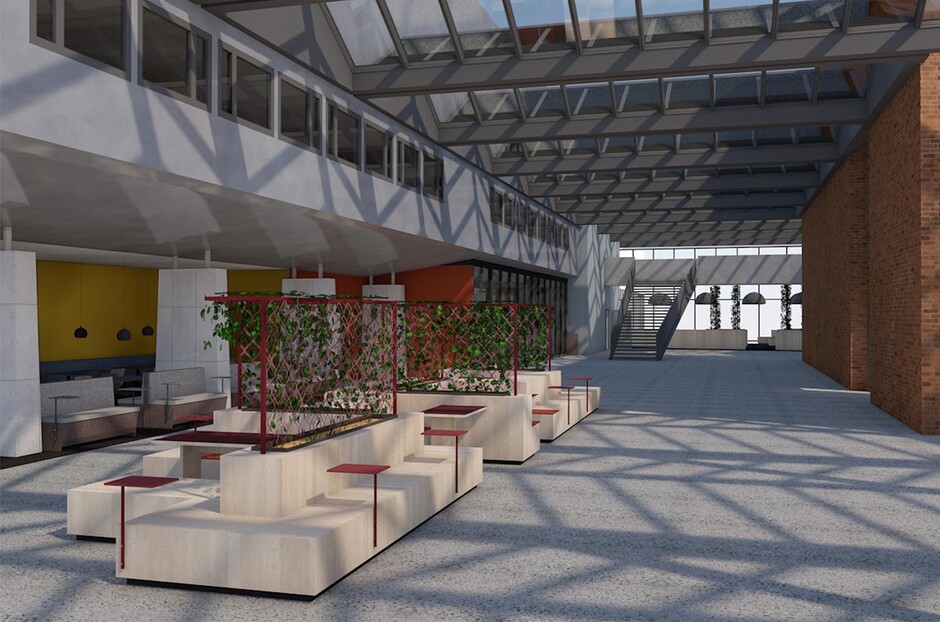 Seating areas with work boards –this is the new Vrimlehall– or Vilhelm Krags hall. (Illustration: HR Prosjekt AS)

“The intention is to vitalise Vrimlehallen so it is customised to the University of Agder’s vision of ‘Co-creation of knowledge.’ It will also take some pressure off the student cafeteria,” says project manager Gunnar Nordlie.

The bathrooms and the photo boxes have already been moved – the toilets to the corridor leading to the footbridge to faculty buildings I and J and to the stairs and elevators of building A. It is a big, modern unisex bathroom with space for more people than the two former bathrooms.

The photo box is moved downstairs to the corridor between Sørbok and Kafé Kampus.

The unisex bathrooms are light and the walls are secured with steel plates to prevent perforation. 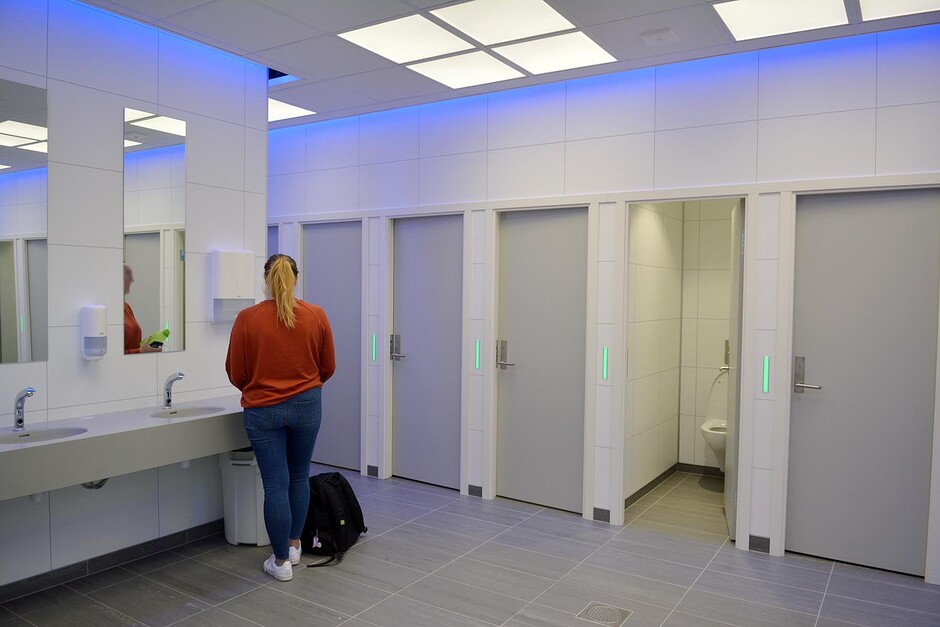 The Unisex toilets are bright, delicate and the walls are secured with steel plates.

Vrimlehallen will have about 260 seats for different uses: Studying, reading, having coffee and a bite to eat, relaxation, and meeting people.

“There will also be a manned serving point for drinks and simple dishes, as well as self-serve machines for coffee, tea and water. The Global Hub will also be placed near the main entrance,” says Nordlie.

Re-building and upgrading projects on this scale will cause inconvenience to the daily traffic and some noise. This will be attempted reduced to a minimum, also by placing noisier work at times with less activity – such as before 8 am in the morning and on weekends.

And everything will be much better from January 2018. 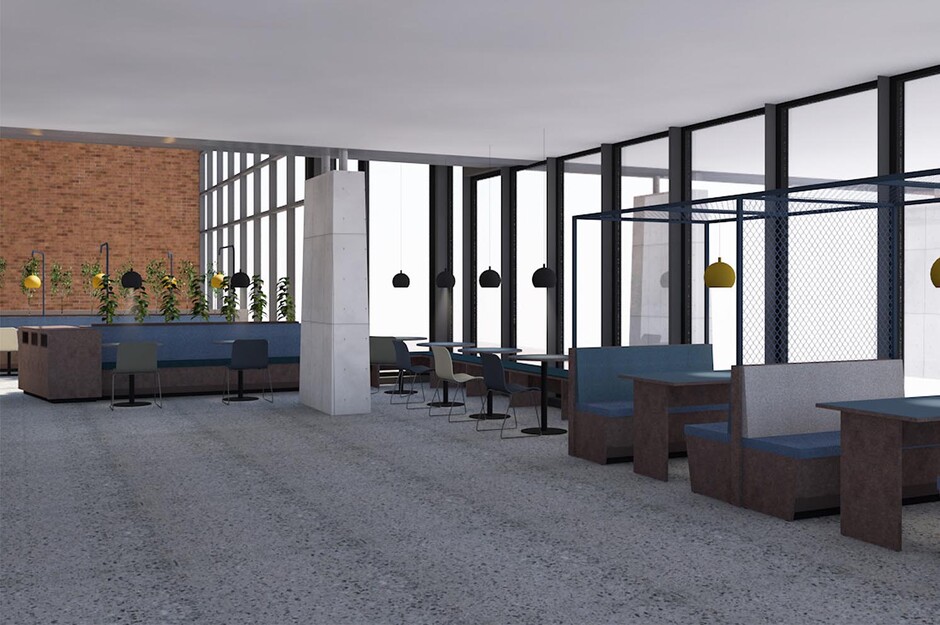 At the end of Vilhelm Krags hall – with a view to the lawn – also know as Halvor Vegard Hauges plass, its official name – there will be well lit, nice working and relaxation places. (Illustration: HR Prosjekt AS)

The following is project manager Gunnar Nordlie’s review of the project:

In the fall of 2016, UiA decided to vitalise Vrimlehallen and make it a functional and pulsing area. The area should invite usage supporting the University’s vision of Co-creation of knowledge, while also reducing the pressure on the student cafeteria. The project was called “Project Vrimlehallen”.

The interior architects at the consulting firm HR Prosjekt AS handed in the winning draft which was revised, detailed and submitted on offer during the spring of 2017. Statsbygg, the developer, has chosen VEF Entrepenør AS as general contractor. UiA has chosen Bico AS as carpenter (delivery of permanent furnishing).

It has always been a goal that the project would grant about 200 seats for mainly student work – either alone or in small groups. The finished project solution will grant a total of about 260 seats divided between seats for studying (approx. 70), work or eat (approx. 80), eat or read (approx. 30) and relaxation and meeting people (approx. 80). 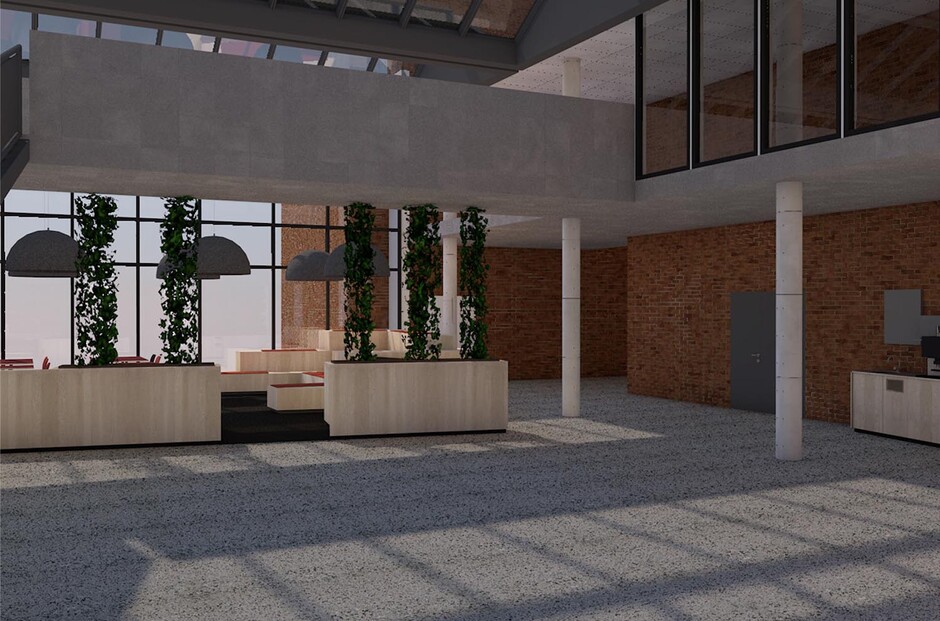 Vilhelm Krags hall by the small auditoriums of building B. (Illustration: HR Prosjekt AS)

In the spring/summer of 2017, the moving of certain first line functions and office spaces located in area B, which is being rebuilt, was facilitated. New bathrooms were also built to increase capacity and replace the bathrooms that had to give way to Kafé Kampus’ new serving point.

The drafts are not made to be presented in bigger formats. They still give a good impression of how Vrimlehallen will look at the start of the semester in January 2018. 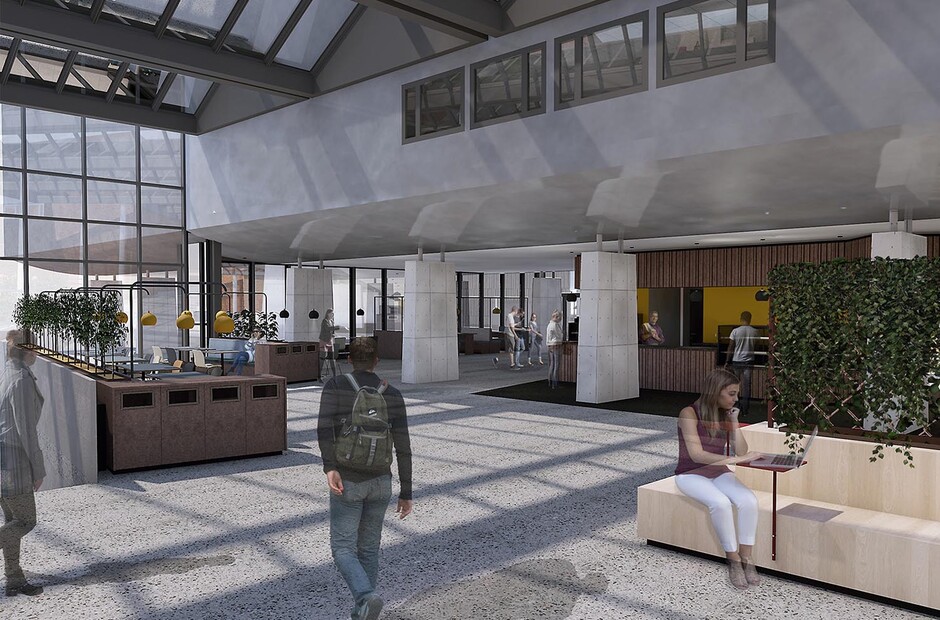 Vilhelm Krags hall on the corner by the stairs to Sørbok and Kafé Kampus (Illustration: HR Prosjekt AS)

Bigger rebuilding projects of areas in daily use always pose a challenge. Teaching will still go on as normal. The contractor is in direct contact with the office of schedules to see when special consideration is needed. Particularly loud activities will be done between 07:00 and 08:00 or in weekends/times of the day with little or no other activity.

Noise, dust and security demands restricting areas that must be available for ordinary activity and areas the contractor needs to perform the work in a proper and efficient way. Bigger events that would normally take place in Vrimlehallen, have therefore had to find other solutions in 2017.

The fall semester 2017 cannot be completed without disturbance. The capable craftsmen the University depends on to finish this project, have a job that causes inconvenience for students and employees. I therefore encourage all students and employees to be understanding. The result will be a new and well-functioning Vrimlehall we all can enjoy for many years to come. 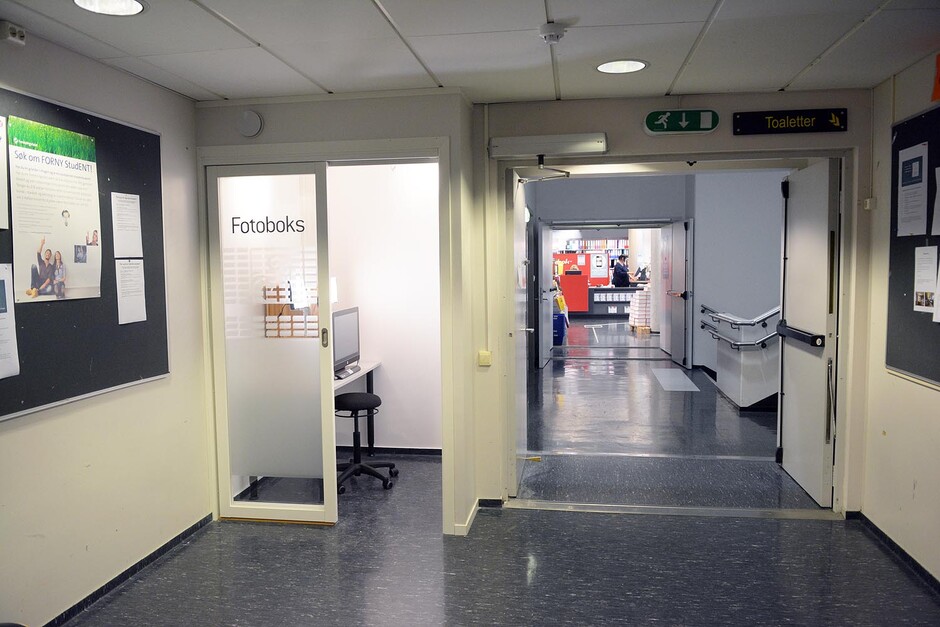 The photobox is moved from Vilhelm Krags hall and is placed where the soda machine was in the basement by the stairs to building A – between Kafé Kampus and Sørbok. 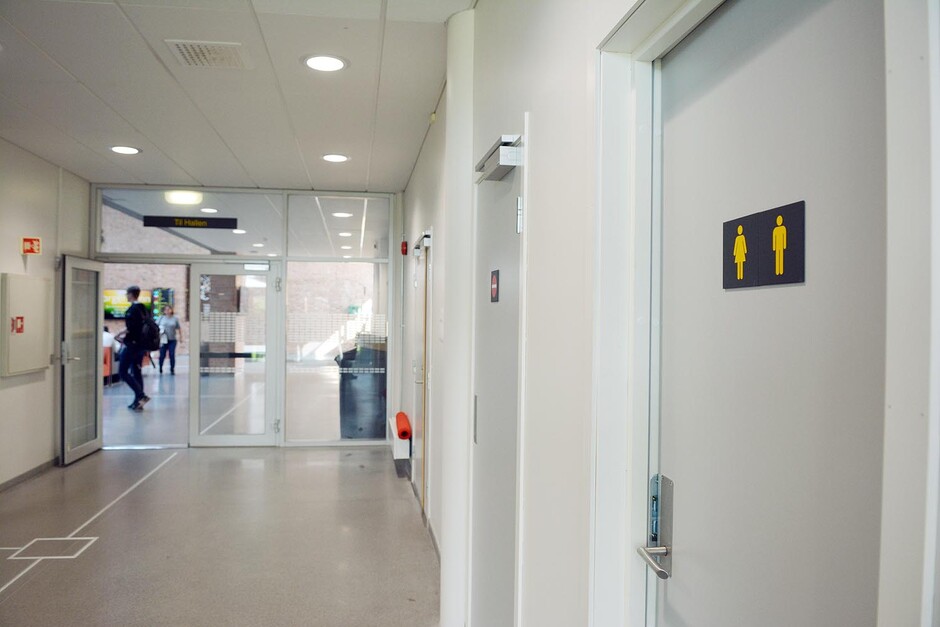 The new bathrooms attached to Vrimlehallen (in the background) are modern and has more facilities than the two bathrooms formerly in the hall. 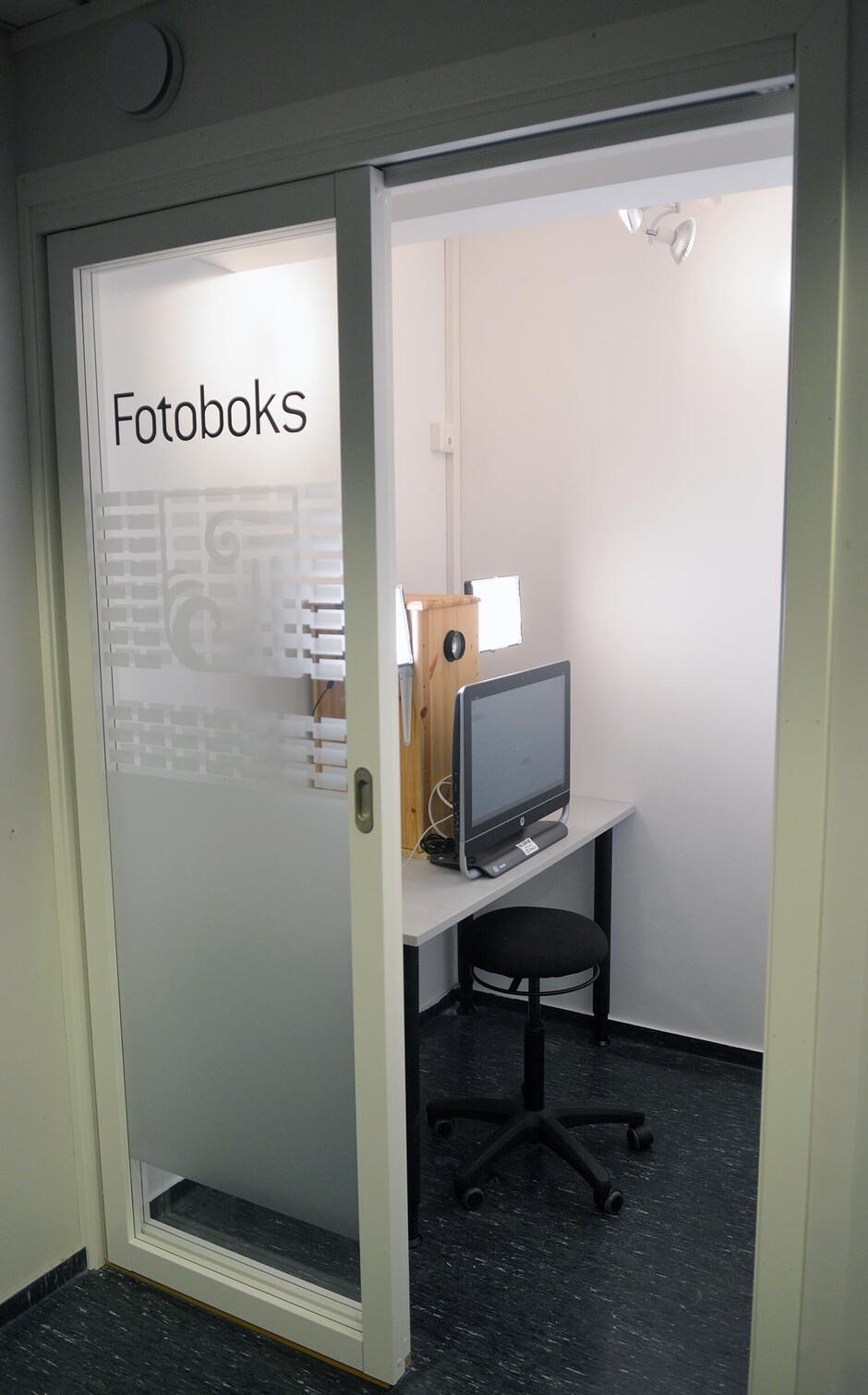 The photobox to take pictures for both student and employee admission cards– and for the employees’ Competence Catalogue.