The University of Agder received praise at an energy seminar in Houston, Texas on Friday. 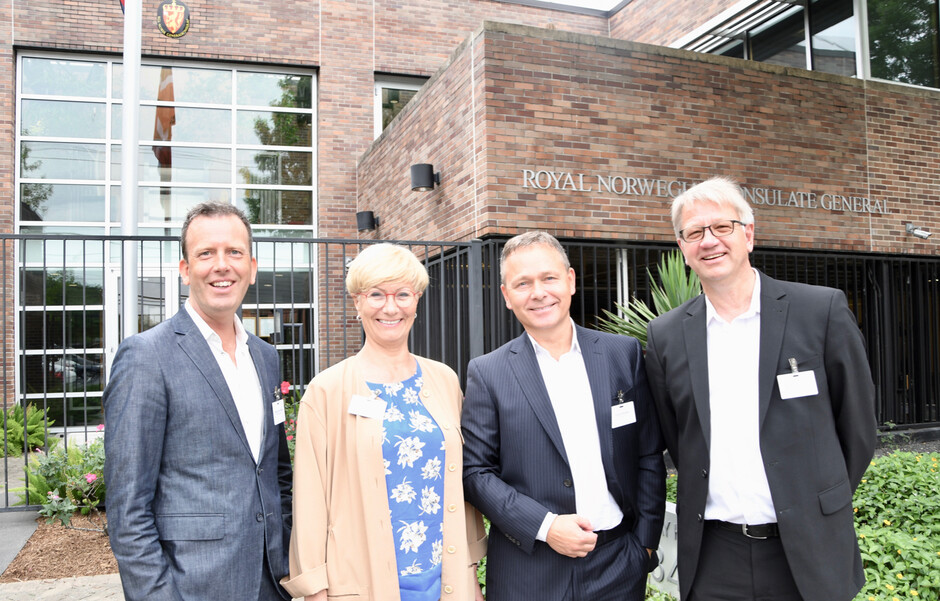 Norway House in Houston was the venue for an energy seminar which also dealt with the digital transformation. Among the participants were (from left) Bjørn-Tore Flåten (School of Business and Law at the University of Agder), Anne-Grete Ellingsen (CEO of GCE NODE), Trond Ellefsen (CEO of Invatare and former leader in Statoil) and Tom Fidjeland (Vice President Rig Equipment in Cameron, A Schlumberger Company). Photo: Arne Roger Janse

Among those praising the university was Tom Fidjeland, chief executive of the Kristiansand based Cameron company, which is part of Schlumberger, the world’s largest oilfield services company. Last year, Cameron employed a number of computer engineers to strengthen the digital transformation the company and the industry undergoes.

“We found many highly qualified people, most of them educated at UiA. It has actually been easier to find the right qualifications here in Southern Norway than in any other location in the world where we operate”, Fidjeland says.

He praises the innovation and business development ecosystem in Agder, which he thinks supports the industry in the region.

“It excites me to see how the University of Agder builds expertise in artificial intelligence and machine learning. The university’s focus coincides with the focus of the industry”, Fidjeland, who is also a member of the UiA board, says.

The energy seminar Harnessing Energy gathered 43 people at Norway House in Houston on Friday. Among the participants was deputy mayor in Kristiansand, Jørgen Kristiansen, and deputy mayor in Aust-Agder, Jon-Olav Strand, along with a number of industry leaders from the region. They are part of the delegation from Southern Norway this year to one of the world’s largest offshore oil and gas trade fairs, OTC, which is held in Houston this week.

UiA is also represented with Bjørn-Tore Flåten, head of the Department of Management at the School of Business and Law at UiA, and leader of the Centre for Entrepreneurship. Flåten is part of the largest delegation ever, counting more than 100 people.

“Cooperation with the industry in Southern Norway is good. GCE NODE and other actors give us input on relevant education programmes. That has, among other things, resulted in a leading education in mechatronics, and the launch of research initiatives like SFI Offshore Mechatronics and Mechatronics Innovation Lab for instance. The establishment of a centre for artificial intelligence research (CAIR) is another example of the same”, Flåten says.

The effect of digitalisation

He sees that industries in Southern Norway deal with the consequences of digitalisation.

“It is important to UiA to give students the opportunity to understand the consequences of digitalisation, not only those studying technological subjects, but all kinds of subjects and educations. Within the arts, the music business has already been greatly changed due to digitalisation; and within social science, many public services have to a large degree been digitalised. We see that digitalisation affects every business and every field, and that is something we have to deal with”, Flåten says.

For UiA, the visit in Houston focused not only on industry in Southern Norway, but also on academic institutions in and around the American city. UiA has collaborated with leading universities in Houston and Austin for several years. Rice University participated with several lectures on, among other things, the opportunities in renewables and the establishment of an innovation hub in Houston, which aims to encourage innovation in the region.