Gonzalez receives the distinction for his efforts in public safety and emergency preparedness in Norway and in Europe. Just after the medal was handed out on Wednesday 23 October, the laureate received notice from Brussels that he and his colleagues had won an innovation prize for their research project Smart Mature Resilience. 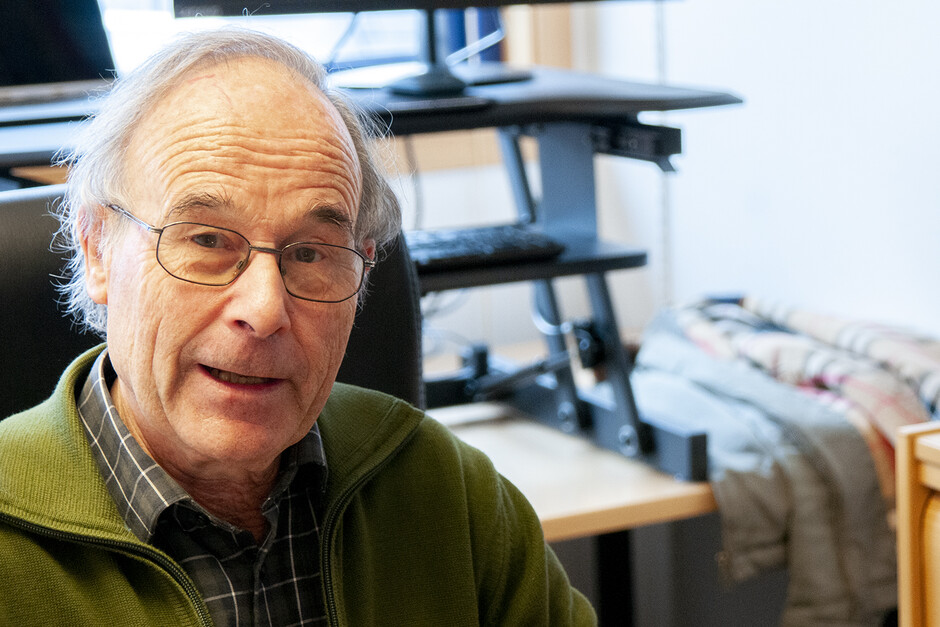 Professor Jose Julio Gonzalez holds two doctorates and has worked with public safety and emergency preparedness for several years. Now he receives the King’s Medal of Merit for his efforts.

Gonzalez was born in Spain, educated in Germany and Norway, and lives in Grimstad. He is the professor who established the Centre for Integrated Emergency Management (CIEM) at the University of Agder. He holds two doctorates, no less, and now receives the King’s Medal of Merit for his efforts in public safety and emergency preparedness.

“This means a lot to me, not the award in itself, but that friends, colleagues and acquaintances have recommended me for it. That they think I deserve the award makes me happy. And proud”, Gonzalez says.

The 75-year-old was born in Spain in 1944 but has lived most of his life in Norway. He might still be a Spaniard deep down, but he is just as much Norwegian and is known to cite poetry from both the Norwegian poet Aasmund Olavsson Vinje as well as the Spanish poet Federico García Lorca.

Professor until the age of 75

He sits leaning slightly forward in his office chair. Gonzalez turns 76 next February, and it has only been a few months since he left his job as a professor. Not because this bundle of energy had to call it quits, but his professorship had to come to an end at some point.

The final stop in the last chapter in the story about Professor Gonzalez was set in February 2019. Until then, he worked full time as a professor at UiA, after a five years extension as professor when turning 70. The mature professor has not been idle over the last few years. He has published numerous articles and books at top level, right until 2019.

Now he sits in his office at the firm Red Rock in Sørlandsparken. The firm was established by former students, and Gonzalez has been hired as an Executive Research Advisor. He will be there a couple of days a week, but so far he has been there three and four times a week, and that is probably how it will continue for a while.

“We work with challenges in the marine sector and digital transformation, and I find it rewarding to be able to contribute with my expertise. It is interesting to learn from conversations with the young people at Red Rock, and it seems to me I shouldn’t opt out of the community but contribute with my knowledge and experience”, he says. 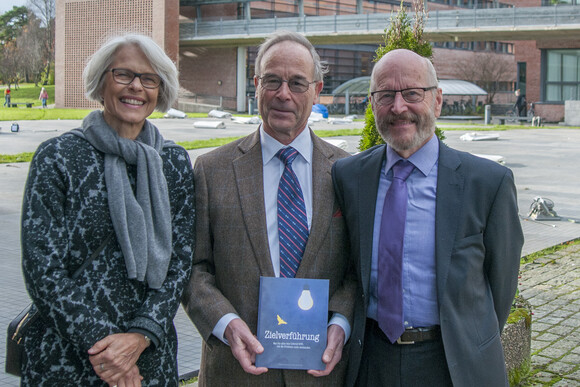 Professor Gonzalez flanked by the professors Ines Heindl (on the left) and Hartvig Eckert when they published the book Zielverführung in German in 2017.

Professor Gonzalez can read a book or four, double-check a reference, compare a mathematical equation to a model from another discipline and conclude an academic article with footnotes and references. But at the end of the day, Gonzalez is the kind of professor who likes to talk to other people.

He tells about a number of more or less coincidental meetings that have shaped his career, for example the professors Harald Wergeland and Per Kristian Hemmer (brother of the former Ibsen-professor Bjørn Hemmer at UiA) in Trondheim and many other people he has met and discussed various issues with. There is not enough space to name them all here.

The Norwegian Directorate for Civil Protection says in its endorsement for the King’s Medal of Merit, that Gonzalez has been a trailblazer within public safety and emergency preparedness and highlights especially the research project Smart Mature Resilience as an example.

It is a research project under the EU Horizon 2020 programme, where Centre for Integrated Emergency Management (CIEM) at UiA in cooperation with Kristiansand municipality, Agder county emergency units and international actors have produced ground-breaking resilience guidelines for the EU.

Many of the other participants who nominated Gonzalez for the King’s Medal of Merit also mention this EU project which went over three years and centred on resilience. 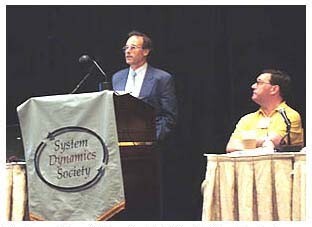 Gonzalez presents new solutions for security and preparedness efforts at a conference in New York in 2003.

What kind of diagnosis is that? How about robustness, resistance or contingency planning?

“Do researchers always have to come up with a foreign-sounding concept to say something which could be said using more ordinary words”, I asked when I first met Jose Gonzalez a couple of years ago.

At that time, he was busy completing the Smart Mature Resilience project for the EU. In competition with 50 European participants, the University of Agder and partners won the commission to develop risk assessment policies and resilience guidelines for the EU.

The application was written by Jose Gonzalez, a professor colleague from Spain coordinated roles and resources while our man at UiA was running the science part of the project. Four universities participated, seven European cities were involved, among them Kristiansand, and a number of other partners. The project ran from 2015 to 2018.

“It is called resilience”, Gonzalez said some years ago. “It is a concept that will become more relevant in the time to come”, he said. And that is what has happened.

The concept is taken from psychology where it refers to the human ability to adapt in the face of adversity and stress. In the world of Gonzalez and the EU, it refers to the ability of cities, towns and countries to withstand and face major incidents like accidents, terrorist acts and natural disasters.

UiA and the project partners have prepared a handbook in resilience management for cities and towns. The handbook is an ABC of the most important steps a society can take to reduce vulnerabilities and quickly recover from terrorist attacks, floods or other disasters.

“So far, the EU has reported back that they are pleased with our work, and we will see if our suggestions are good enough to be adopted as EU’s standard for resilience planning and preparedness measures”, Gonzalez says.

He is modest when he says that he is ‘well pleased’. It is nearer to the truth to say there was no end to the cheering. The research project received the very best evaluations from the EU. It has already been awarded a prize for best website presentation and has been nominated for prizes in the categories impact and innovation, among others. Which project receives the Horizon Impact Award will be decided soon.

Right after being awarded the King’s Medal of Merit, the notice from Brussels arrived informing that the research project would receive an innovation prize.

“What is special about this project is that common guidelines and standards for European resilience management are presented for the first time. One of our deliverables is a maturity model to assess what maturity stage a city is on and what maturity stage it needs to reach in order to be resilient in areas like communication, emergency preparedness and cooperation between various emergency services”, Gonzalez says.

The Spanish Norwegian, if we may call him that, lives in the countryside at the farm Holmen in Reddal, just outside Grimstad. Here, he grows his own potatoes and cabbages, and a couple of other vegetables. Jose Gonzalez is not the academic type who only roams in the world of ideas and theories. If you live on a farm, you have to be interested in and able to work with your hands as well. Nowadays, new clapboards for the old farm building need to be painted and prepared before the carpenter arrives to set them up.

Gonzalez was educated in Germany. Why he kept moving further north in Europe, he explains both with an inner attraction to the Nordic forests, but also the political conditions in post-war Spain. His parents worried about developments in the fascist dictatorship in Spain and feared the outbreak of new civil wars in the country. The children were encouraged to get an education, and at that time children listened to their parents. At least the Gonzalez children, two boys and three girls, and that is how they all ended up at universities in Germany.

The student, Jose Gonzalez, ended up with Professor Werner Heisenberg, the one who received the Nobel Prize in Physics in 1932 for the creation of quantum mechanics. But when the very young student, while working on his master thesis, discovered a calculation error in the great physicist’s formula, which according to Heisenberg would be the lynchpin of the whole of physics, Gonzalez chose to do his doctorate elsewhere.

By the way, Gonzalez, the student, had his suspicions confirmed by Heisenberg’s professor colleague.

Moreover, Jose Gonzalez never fell deeply in love with elementary particles, which according to Gonzalez and other experts are the fundamental building blocks of all that exists. The elementary particles have in other words another function, but the details of that will have to be presented elsewhere.

Young Gonzalez received his doctorate degree in mathematical physics in 1970. The thesis formed the basis of much of his later work in many ways. After some inspiring conversations with Per Kristian Hemmer, he described some biochemical processes which biochemistry professors had difficulty explaining, among other things. Then he went on to describe the structure and sequence of molecules in carob. That became his second doctorate degree, on polymers, submitted and defended in 1978.

“If you know mathematics and mathematical modelling, you can model anything”, Gonzalez says.

The Norwegian, double doctorate holder, professor and almost-retired Jose Gonzalez was born Spanish. But most of all, he was born cross-disciplinary, curious and friendly. This is the researcher who looks beyond the tip of his own field’s nose and listens to people from completely different disciplines. That is why it was important to him that UiA’s Centre for Integrated Emergency Management (CIEM) became a multidisciplinary centre combining engineers with social scientists, and in the future he would like to see the centre expand with two or three humanists.

Usually, multidisciplinary cooperation sounds like cliché and empty words with no root in reality. Jose Gonzalez has experienced that it works.

“Technology alone is never enough. The human factor is crucial. Elementary particles and technology are not interesting in themselves. They are only interesting when they solve the challenges that humans face”, Gonzalez says.

On 23 October, Jose Julio Gonzalez received the King’s Medal of Merit. For his efforts in public safety and emergency preparedness in Norway and in Europe. And probably also for his multidisciplinary and cooperative disposition.

Watch a video from the award ceremony