She has been a senior executive in Southern Norway for 24 years. Now she takes over the largest Faculty at the University of Agder. 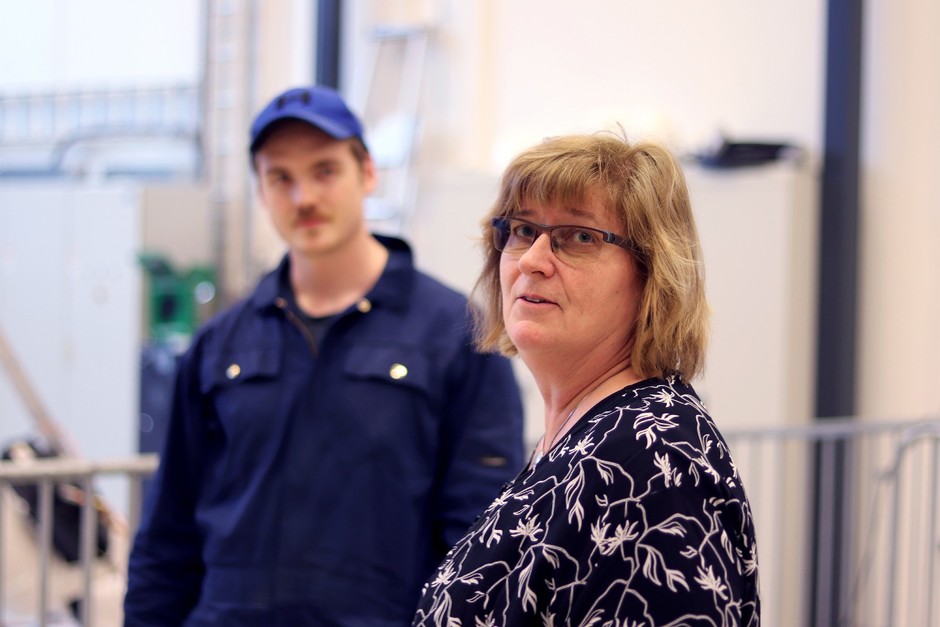 Jorunn Gislefoss is the new Faculty Director of the Faculty of Engineering and Science and is looking forward to working together with her staff towards common goals. Here she is visiting the Mechatronics Laboratory at Campus Grimstad, one of several labs and fields that she will know more about in the time to come.

Jorunn Gislefoss took over as Faculty Director on 3 February and is now responsible for 400 employees at the Faculty of Engineering and Science. Among them, we find mathematicians, engineers, researchers within artificial intelligence and administrative officers. Together with Dean Michael Rygaard Hansen, her task is getting this large and varied group to pull in the same direction.

“In every workplace the most important resource is the employees”, Gislefoss says

Jorunn Gislefoss has managed industrial enterprises ever since she took her doctoral degree in Physics at NTH in 1194. The longest period was at GE Healthcare Lindesnes, where she had manager positions from 1995 to 2017, the last five years as the factory’s CEO.  At REC Solar in Kristiansand, she was CEO from 2017 to 2019, and at NORCE she has been working as Senior Adviser from the autumn of 2019 and until now.

Although being a Senior Executive for nearly a quarter of a century, she has not become a spokeswoman for complicated management theories. Gislefoss believes in simple and basic ways of doing things.

“In good days, the staff should be praised, and when the going gets rough, the leader must accept the responsibility for pointing out the way forward”, Gislefoss says.

Gislefoss enjoys involving herself in the details. When she was working at GE Healthcare and REC Solar, she was frequently seen at the factory floor, discussing details with the operators.

However, it is also necessary for the leader to return to the office and take the required decisions, and it should not be swept under the carpet that she also likes to manage. Which, of course, is why she is a manager. She prefers to withdraw, to take a second look at issues, to consider them in relation to other details and to discuss matters with the rest of the manager group. By zooming in on advantages and disadvantages, she can come up with an overall impression of the case at hand before deciding on the next move.

She is motivated by placing her work in a broader context, and she prefers to lead by vision.

At GE Healthcare Lindesnes, they produce contrast medium for x-ray photography, and through these products save lives every day. At REC Solar, the main product is silicon for solar panels, which contribute to solving the world’s energy problems. At Norce, they were passionately concerned with knowledge and sustainability. Now, Jorun Gislefoss has started to say that she and her new colleagues at UiA shape the society of the future.

“There must be a meaning to what we do that goes beyond just coming to work every day. The societal mission of UiA is to carry out research, to educate and to disseminate our results, and to me, these tasks are really meaningful”, she says.

At the moment, UiA is working on new sustainability analysis and a climate – and environment plan for the university. To Gislefoss, environmental work is nothing new. The research for her doctoral degree was focussed on just environmental – and climate physics. She studied CO2 content and other environmental impacts on the ocean.

“Sustainability was important then, and it is even more relevant now. For example, we need to be aware and have the right procedures for our own daily operations. Professionals at our Faculty contribute with new climate research which shows how fish, animals and birds are influenced by the climate changes”, says Gislefoss.

She also points to the work that is being carried out at the Center for Coastal Research.

Dealing with diversity and differences among employees is a valuable experience she brings with her from the industry.

“People are different, and it is essential to use these differences positively.  Different types of people in one workgroup will challenge each other, and this will lead to better results”, Gislefoss says.

According To Gislefoss, her role as Faculty Director is primarily about managing people and facilitating for them to succeed in their work.

An important task at which UiA has been successful for several years, and which Gislefoss also aims to concentrate on, is to establish extensive cooperation with business and industry in Southern Norway.

“I wish to strengthen the interaction between the university and the industry, primarily through the large clusters Eyde and NODE. Together we can develop the region”, Gislefoss says.

She has never studied at UiA herself; however, she has been a member of the University Board at UiA from 2008 – 2012.

“UiA is an exciting institution to be a part of. Co-creation of knowledge is a good vision. The institution is an essential supplier of research and education to the region. To enable students to function well in working life is a highly prioritised job for us”, Gislefoss says.

With her long experience from industry, she has led a number of cooperation projects between industrial enterprises and the university. This has taught her that internships and student assignments are important tools both for UiA and the companies.

The individual and the team

Gislefoss is a team player; she has been active within handball for many years, both as a coach and as an athlete. She has brought the interaction of the team sports into working life, and she will also attempt to bring it to the university. Staff and cooperation partners should, so to say, play on the same team and make each other better.

“To reach our targets, we have to give our employees the competence they need to carry out their work in the best possible manner. I am concerned with dialogue and to bring out the potential of all employees”, Gislefoss says.

The people who know her characterise her as a kind and caring leader with a special ability to see people and to make all employees feel that they are taken seriously. At the same time, she sets requirements and expects everyone to go together to reach common goals. There is nothing coincidental about what Gislefoss is doing, they say. She is clear about what she wants, and that cooperation will lead to a successful result.

Now the team player Jorun Gislefoss and her new colleagues will take the Faculty of Engineering and Science into a promising future.