The first digital doctoral defence at the Faculty of Fine Arts

Mariam Kharatyan is the first to have defended her doctorate online at the Faculty of Fine Arts. “A magical experience”, says dean and disputation chair Marit Wergeland. 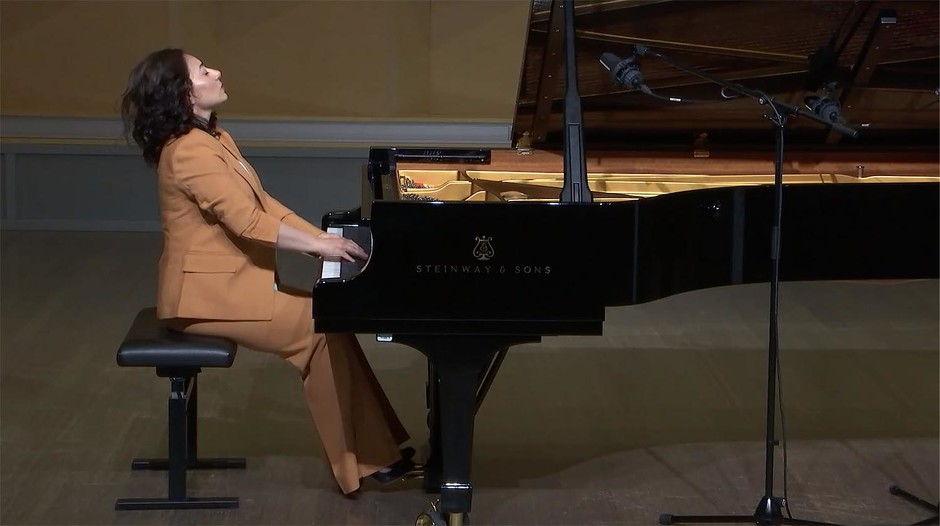 The first part of the disputation was a concert where Mariam Kharatyan performed her interpretations of the Armenian composers Komitas and Khachaturian. (Photo: Marit Wergeland)

“Kharatyan seemed very well prepared and gave satisfactory and good answers to all the questions from the committee. She conducted her doctoral defence in a brilliant and compelling way, with great insight and knowledge of her specialty, says Kharatyan's supervisor, Professor Emeritus Per Kjetil Farstad.

Farstad was main supervisor and Ingfrid Breie Nyhus from the Norwegian Academy of Music was co-supervisor for Kharatyan in her doctoral project ‘Armenian Fingerprints - interpreting the piano music of Komitas and Khachaturian in light of Armenian folk music’, which she has worked on since 2015.

She was the first externally funded doctoral candidate at the Department of Classical Music at UiA.

During her fellowship period, she has played a number of top-level concerts - on two occasions she played in the international Grieg competition at Troldhaugen in Bergen, where she reached the semi-finals. She has also played compositions by Khachaturian with Kristiansand Symphony Orchestra under the direction of Eivind Gullberg Jensen.

The disputation was originally scheduled for 24 March, but when campus closed on 12 March, it took some time to figure out how it could be conducted digitally, since the artistic performance was a key part of the presentation.

Since the Norwegian Artistic Research Programme is behind the disputation, there were slightly different rules for its execution. Instead of the committee members being formal opponents one by one, the disputation was a conversation between the assessment committee and the candidate, moderated by disputation chair Wergeland.

“Because Mariam does not have a grand piano available at home, she received dispensation to conduct her public defence on campus, with support from the IT Division and with the dean present in the largest concert hall on campus”, Wergeland says.

She goes on to say that sitting with four others in the large concert hall and hearing Mariam perform her musical interpretations was an intimate and magical experience.

“Mariam played as if she were playing for a packed concert hall and did not hold back on feelings or performance. It was amazing to experience that this was actually possible. The only thing that felt strange was that after the presentation, the discussion with the committee and the ex auditorio, it would usually end with warm hugs, flowers, and a dinner party with speeches. It was almost painful to stay a meter away from each other. But we will catch up on that at the first and best opportunity”, says Wergeland.

Kharatyan herself had a positive experience of the defence:

“It was an absolutely amazing experience for me. Despite the digital format and the screens between the committee and me, and without an audience in the hall, I felt the atmosphere was good. We had a good discussion and I became very involved in the conversation with the committee”, says Kharatyan.

Mariam Kharatyan has researched the two Armenian composers Komitas and Khachaturian in the light of Armenian folk music. (Photomontage)

Initially, it was intended to carry out the entire disputation on the Zoom conferencing tool. The IT Division had spent a lot of time on the right equipment and the correct rigging to get the sound quality that was crucial for the artistic performance to be transmitted digitally.

After many hours of trial and error, it became clear that Zoom as a tool was not sufficient to successfully transmit Kharatyan’s performance. The decision was made to split the disputation into two – of which the first part, the concert part, was live streamed and the second part, the conversation between Mariam and the committee, was carried out on Zoom.

The assessment committee's female member, Professor Marianna Shirinyan from the Norwegian Academy of Music, began with questions about Mariam’s musical performance. It was more like a conversation between two pianists about Mariam’s pianistic interpretations of the works of Komitas and Khachaturian, linked to her inspiration and interest in Armenian folk music.

The committee’s other member, Professor Emeritus Bjørn Kruse from the Norwegian Academy of Music, continued to question the candidate, and linked his questions more to the topic of Mariam’s research project. The committee chair, Professor Bjørn Ole Rasch from UiA ended the examination with questions related to performance aspects.

Wants to continue at UiA

Kharatyan plans to continue in her accompanist position at UiA, now as an assistant professor, at the same time she has received several concert invitations both in Norway and abroad.

“I miss my students, practicing and playing concerts together and watching their musical development. I hope that the corona situation improves soon and that we can get back to our normal working lives again”, says Mariam Kharatyan.

Exploring the essence of folk music