For two years, a total of 100 students have been working under strict coronavirus restrictions to complete the race car project of the student club Align Racing. 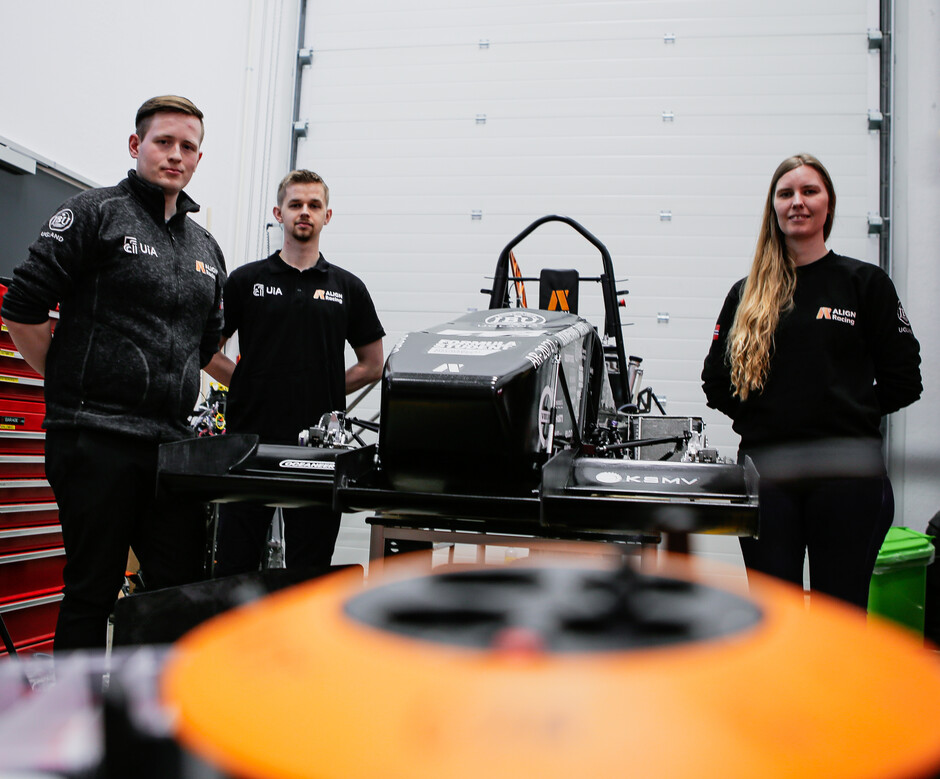 The race car is inspired by the car Rudolph Gore-Slimey drives, one of the characters from the Norwegian Ivo Caprino film classic Pinchcliffe Grand Prix.

“We implemented the Pinchcliffe theme all the way through, which we also used on two previous cars. The plan was to complete the project in April last year, but due to coronavirus and the subsequent restrictions, the project was extended”, says Henrik Brådland, who is responsible for sensor and computer in Align Racing.

Align Racing is an interdisciplinary student association at UiA. The club is funded by the university, the investment company JB Ugland and several sponsors. It is run as a company with an organisational structure, meeting activity, project plans, budgeting, and appraisal interviews.

“Our vision is theory in practice, no matter what you study. This is a place where people from disciplines such as economics, innovation, engineering, marketing or HR will acquire practice in their fields. But also a place where there is room for error and learning”, says Brådland. 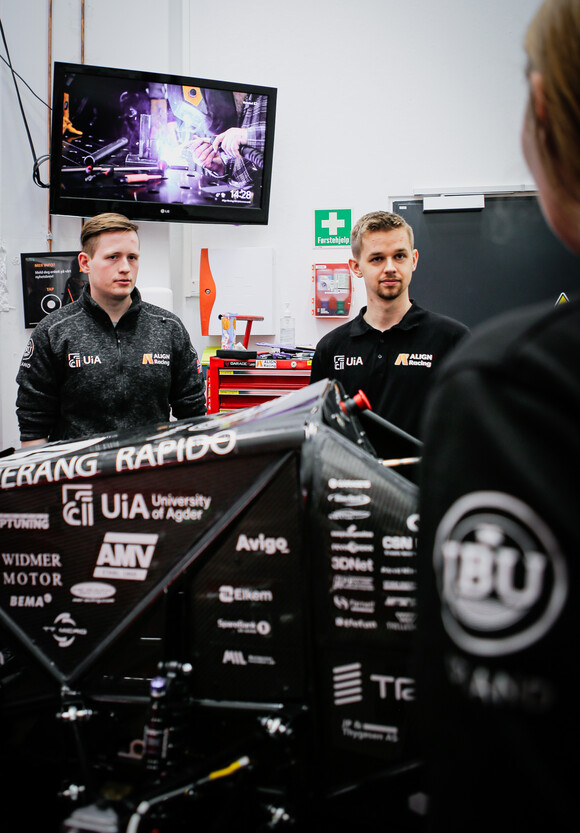 Henrik Brådland (from left) is responsible for sensor and computer in Align Racing, and Eirik Strandman is responsible for the control system of the race car. Here they have the opportunity to use the knowledge acquired in mechatronics at UiA.

Named after the Norwegian classic

From August 2019 until today, they have been working to finish building the race car ‘AR20/21 Boomerang Rapido’, which they named after Gore-Slimey’s car in the Pinchcliffe film.

“The inspiration for the name is the coincidental resemblance in both design and colour”, says Henrik Brådland.

The student club Align Racing tries to build a new race car every year. When they started the work in 2019, they aimed to improve on the previous car: They made the car 20 kg lighter, improved the grip on the rear wheels, and built elements that make the car go even faster.

“We have reused much of the system from the previous car, and made everything stronger and better to improve the performance of the car on the race track”, says Brådland.

“The reason we achieved this during the pandemic is because we are a good team. We were eager and we always found solutions. We had rotating cohorts of five students each and planned all the details in digital meetings”, says Therese Waldal Aarstad, project leader of Align Racing. 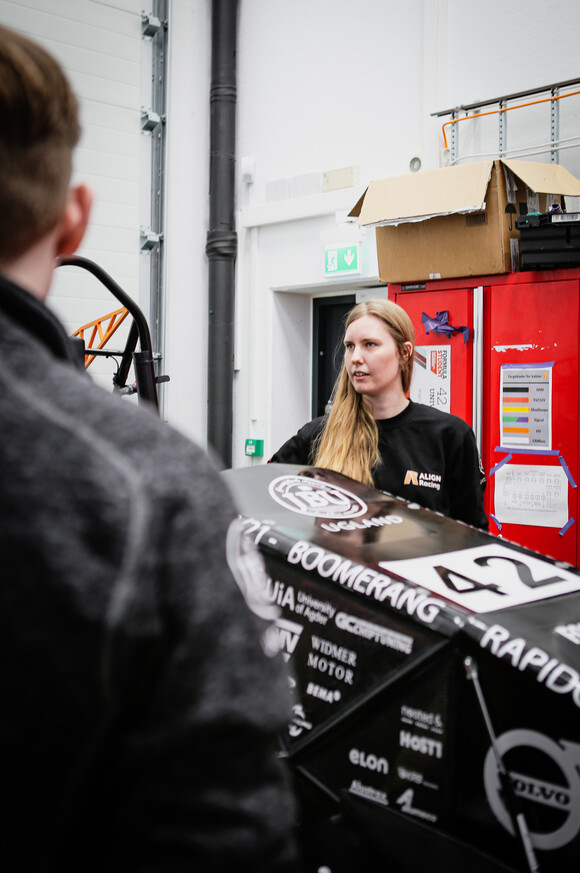 Therese Waldal Aarstad studies innovation and knowledge development at the School of Business and Law at UiA and is project leader of Align Racing.

Attractive in the job market

Despite the coronavirus restrictions, a total of 100 students from 15 different study programmes have been involved in this year's project.

Mechatronics student Eirik Strandman was responsible for the control system of the car. He emphasises the practical aspects of running a student association as key to landing a permanent job after graduation.

“I have previously worked as a mechanic in the industry. There, you often realise that theory does not work in practice. Fresh graduates often seem to have had too much theory and not enough practice during their education. The best thing about this project is that it gives you good practice and you experience what works and what doesn’t”, Strandman says.

“Practical experience is sought after by employers when you apply for a job later on. Personally, I have secured a permanent job as an engineer in the technology company Voca. Align Racing has clearly contributed to me getting a job”, Henrik Brådland says.

The goal of the project has been to participate in a recognised racing car competition in England this summer, together with 300 other students from all over the world. And with judges from prestigious car brands, like Bentley. But the competition is cancelled for the second year in a row due to coronavirus.

“Instead, we want to organise our own race car competition. It will be a social arena with involvement from Norwegian students”, Therese Waldal Aarstad says.

That is why they are busy finishing the very last details of the work. The plan is for the next group of students to take over the car in the autumn semester. And hopefully carry on the tradition in the spirit of Pinchcliffe.

Do you think Align Racing sounds exciting? They need more leaders and members in the club this autumn. You can help design a race car if you send an application to: apply.alignracing.no 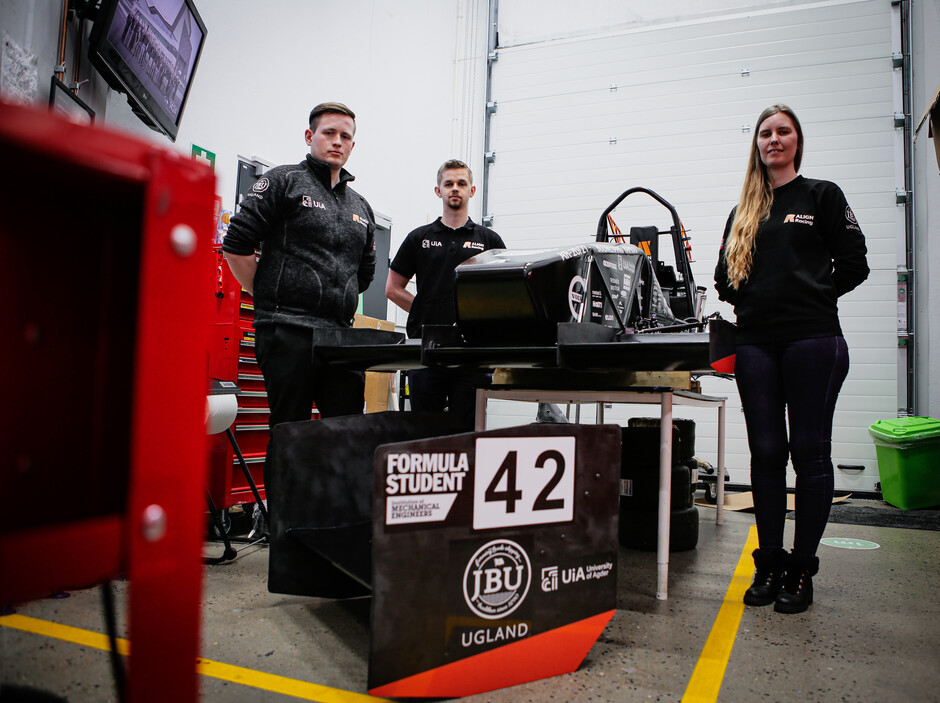 The Pinchcliffe theme is repeated in the construction and choice of colours for the car: Yellow and black like Gore-Slimey's car in Pinchcliffe. They now put the finishing touches to the car, in preparation for new students in August.