How does UiA receive international and minority language students, and how will the University become better at including all students in the knowledge community? Syrian Inam Abdualkareem Albadawi and Canadian Justin Freund are student mentors to UiA Rector Sunniva Whittaker this autumn and will provide advice on language and inclusion. 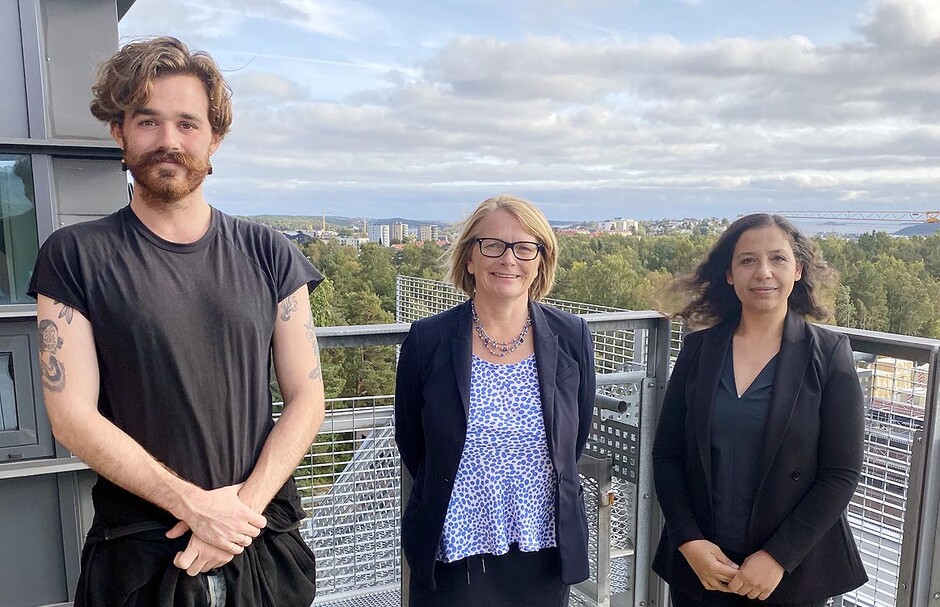 “As rector’s student mentor, I can contribute by telling about my experience as a student with a minority background”, says Inam Abdualkareem Albadawi.

She came as a refugee to Norway from Syria in 2015. In Syria, she worked in the directorate of health in the city of Daraa for several years. In 2018, she started her bachelor’s degree in political science after obtaining the general university and college admission certification in Kristiansand the same year.

“The best thing about studying is the experience of having learned a lot academically, improving my Norwegian language skills, and to see how I collaborate with others in a group. In addition, I have become more critical of what I read, whether it is information I find online or through other sources.”

Hard to get started

As a minority language speaker, she faced many challenges when starting university. First, to find out what to study, and then, how to navigate through the application process.

“When I started my studies, it was a challenge to write academically and also to learn reading techniques. I knew that it was impossible to read everything on the syllabus, but I did not know how to keep up with my courses during the first semester at UiA.”

“It was also difficult to get to know the other students on the programme, even though I was open and started conversations with people. I really wanted to get to know someone, to read together and discuss points that I did not fully understand”, says Albadawi.

Albadawi has spent the first part of the mentoring period talking to other minority background students to discover what challenges they have in common.

“Discussing and hearing directly from those who experience problems with their studies or who need help is very important, so we can find solutions that are suitable for just such a group and for such needs”, she says.

Justin Freund is on the bachelor's programme in global development studies and has a degree in digital media from 2013 in addition to various other education. He chose Norway and UiA to get a broader perspective.

“I recognise that in a rapidly globalising world, people with multi-disciplinary and multi-cultural/geographic backgrounds are going to be critical in solving international problems”, says Freund.

Last year he wrote an opinion piece for the student paper Unikum to highlight the frustration he felt as an international student at UiA.

“I wrote the article shortly after reaching my wit’s end trying to navigate the university’s systems, and hence was not shying away from potentially causing controversy. Almost all of my international friends shared about the mental and emotional strain of not only being foreigners, but also having to bear the brunt of figuring out on our own how to fit into the university”, Freund says.

He quickly received response from several sides, and it was not negative.

“Shockingly positive. I was rather quickly contacted by multiple leaders within the university, however, all of whom were thrilled to see international students speaking up”, Freund says.

One of them was Rector Sunniva Whittaker who last summer challenged Freund to be her mentor to help her understand what it is like to be an international student at UiA.

“My hope is to create strong connections and lines of communication between international students and university leadership. There are so many internationals seeking places to influence the university, and so many leaders and organisations seeking international input. I want to bridge these gaps and create a strong foundation for multi-national collaborations throughout the university”, says Freund.

He has a strong wish to contribute to UiA’s vision about co-creation for the future’s knowledge.

“With such a vision, the inclusion of international influence is critical. Tomorrow’s knowledge is global - the leaders who work to stop climate change, end hunger, and transform global economics will be leaders who collaborate across the world. Universities who recognise and prioritise this are going to be the universities on the cutting edge of tomorrow’s problems. In other words - we work better when we all work together”, says Freund.