The UN’s 17 sustainable development goals (SDGs) now adorn the steps leading to the student cafeteria on Campus Kristiansand and a wall near the main entrance to Campus Grimstad. 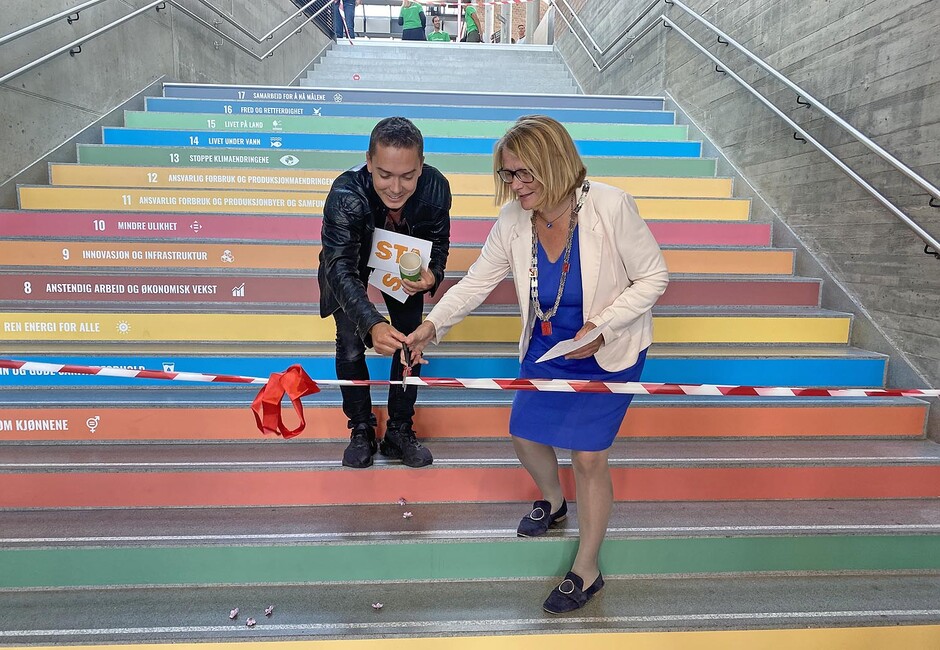 The president of the Student Organisation of Agder (STA), Kristian Fredrik Meyer Ødegård, cut the ribbon together with Rector Sunniva Whittaker.

“We thank the students for this decorating initiative and want to encourage a lively conversation about what actions we can take to meet the UN goals”, says Rector Sunniva Whittaker.

Eradicate poverty and hunger, quality education, combat climate change, affordable and clean energy for all - these are among the UN’s 17 sustainable development goals, which are “the global blueprint to end poverty, fight inequality, and stop climate change by 2030”, as stated on the UN website.

These goals now adorn both the steps and a wall at UiA, precisely to remind everyone of our shared mission.

“The idea of ​​sustainability will permeate UiA’s teaching, research and innovation. The major global challenges are relevant in all our study programmes”, Whittaker says. 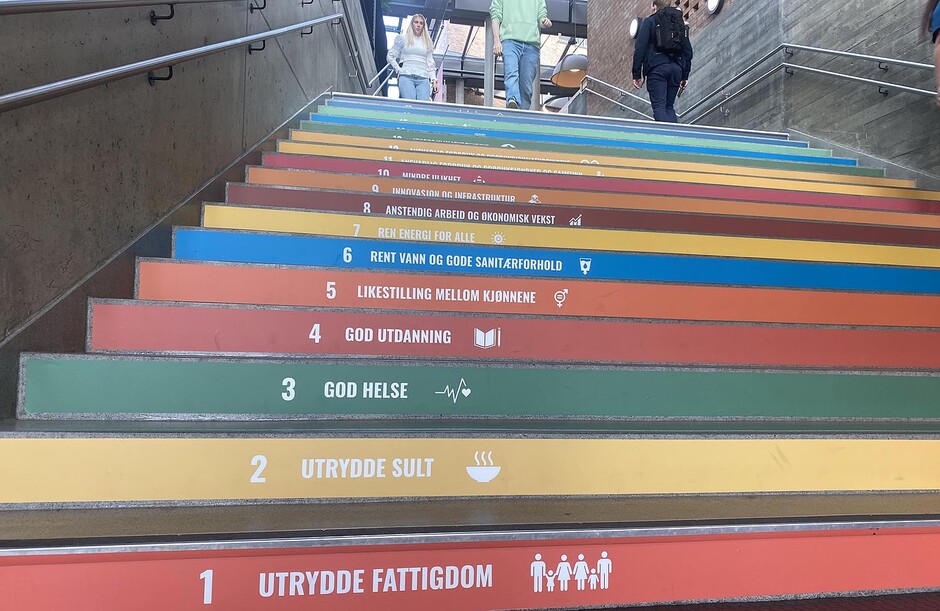 The stairs from Vilhelm Krag’s hall to the student cafeteria and bookstore have been decorated with the UN’s 17 sustainable development goals.

The Student Organisation of Agder (STA) has its own committee for sustainability and the environment, and this committee suggested displaying the UN goals on stairs and walls.

“The first part of the report by UN’s Intergovernmental Panel on Climate Change was published only recently, dealing with the physical science behind climate change. Three more parts will be added in 2022. The first sub-report states that heat waves will increase, rainfalls and hurricanes will be more intense. Through knowledge and research, universities can help solve these challenges”, said STA leader Kristian Fredrik M. Ødegård when he cut the ceremonial ribbon together with Rector Whittaker.

On Friday 27 August, he will be at the ceremonial opening at Campus Grimstad and challenges everyone to take responsibility. 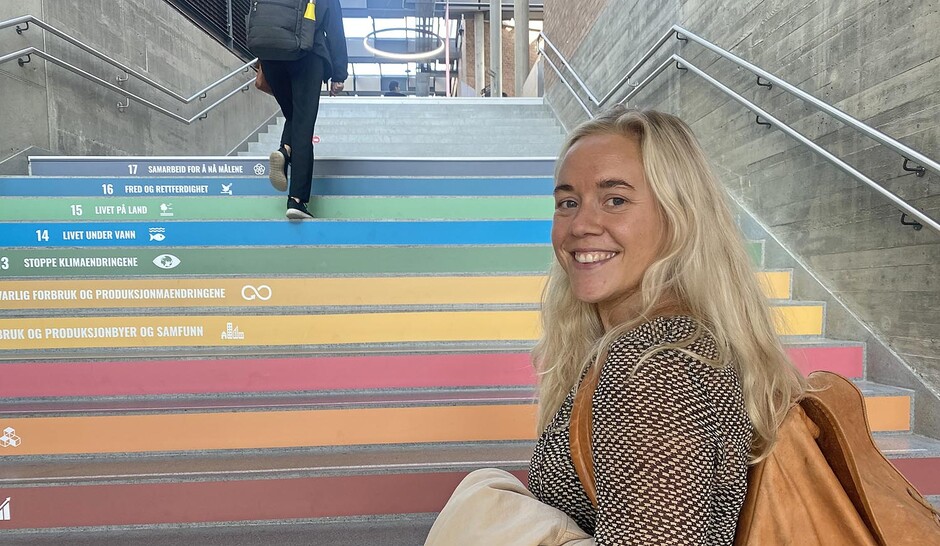 “This is a good thing, because something must be done”, says Ida Haukås, who studies nursing.

Ida Haukås has just started a bachelor’s degree in nursing and was among the first to ascend the stairs after the ceremony.

“I think this is looks good, she says as she looks more closely at the 17 goals, one for each step. Because something must be done”, she says with reference to the future.

Ole August Kjærvik is a third-year student in political science and has learnt about the goals in his study programme.

“This is relevant to us and a good reminder”, he says. 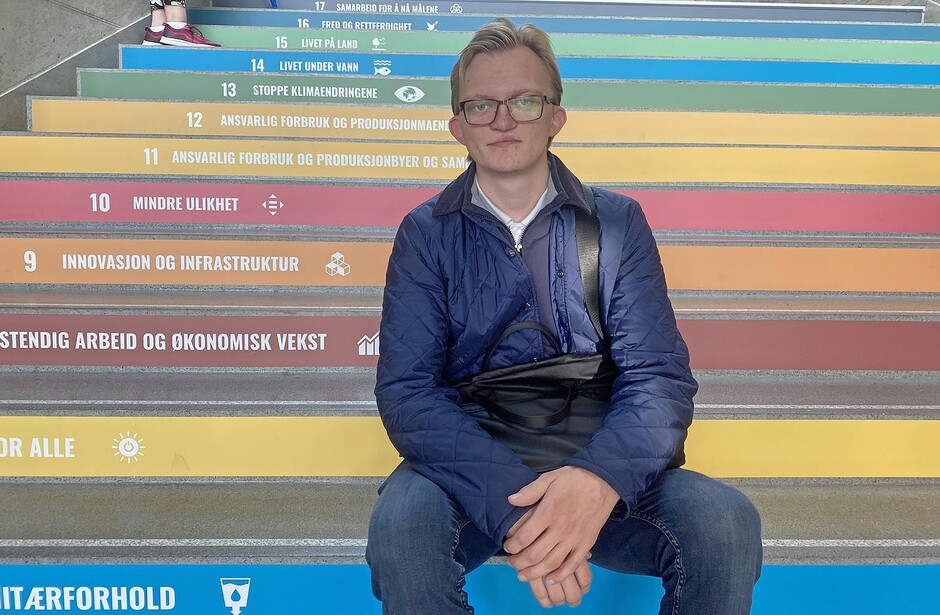 Professor Martin Engebretsen has visual communication as one of his specialist areas. He nods appreciatively when he sees the staircase decoration.

“This serves both to raise awareness and as learning. Every time people use the stairs, they get a reminder”, he says. 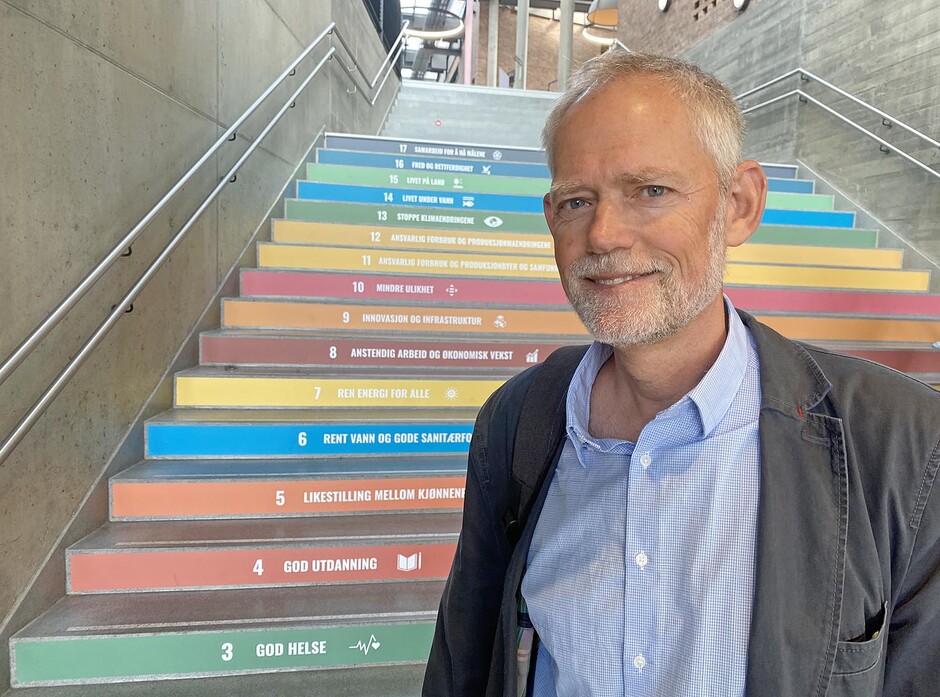 “Every time we use the stairs, we get a reminder”, says Professor Martin Engebretsen, who teaches analysis of communication.