Professor Michael Schulte has received this year’s Research Award of the Sørlandet Knowledge Foundation (SKF). Schulte interprets runic inscriptions and does research on Old Norwegian and Norse – part of the Norwegian identity. 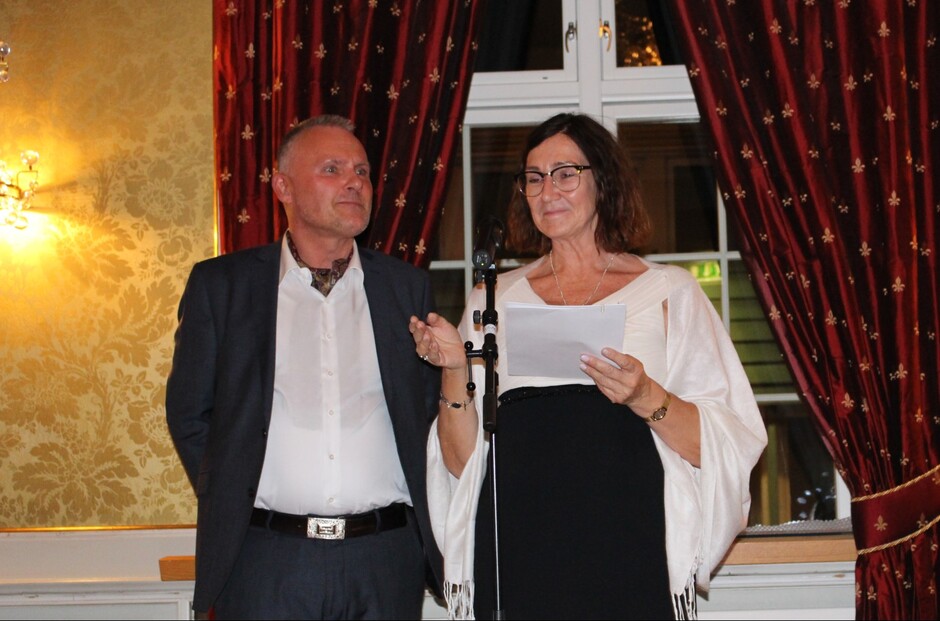 “The SKF Research Award 2019 means a lot for me as a dedicated scientist, for my motivation and the pleasure I retrieve from doing research. It shows that my research is relevant and meaningful to society, especially here in Agder,” he says.

In 2014 he moreover received the Fritjof Nansen Award for Outstanding Research.

The SKF Research Award is issued by the Agder Academy of Sciences and Letters and financed by Sørlandet Knowledge Foundation. It was awarded during the Academy’s annual celebration on 25 October.

“I do research on something that is part of our identity, Old Norwegian and Norse. At a time when we risk eliminating the historical dimension from society, and thereby risk the loss or manipulation of our cultural history, this type of historic linguistic and cultural research is important”, he says.

The Research Award provides Michael Schulte with increased writer’s inspiration for his new book project Runer i Agder gjennom tid. In this book he aims to cover the complete history from 300 AD to 1400 AD.

“Since I received the SFK Research Award among others because of my work as a runologist and historical linguist, it will be even more exciting to write on local runic history”, he says.

These days, information is transient. We send out a text message, but we do not worry about how accurately we express us, and afterwards it is gone. Runic inscriptions on the contrary, have constant fixtures, quality and a stabile dimension. It is not so easy to scratch on stone.

“By means of runes, we can obtain both linguistic and cultural knowledge, we catch a glimpse of everyday life as it was over a thousand years ago”, explains Schulte.

Rune sticks found by the pier in Bergen, depicted among others christian prayers, heathen protective magic, love declarations, and comments on everyday chores. Runes are also used for legal documents, on property, land consolidation issues and to memorize historical events.

An example is the rune-stone at Oddernes Church, here in Agder, which has the inscription “Eyvind made this church, godson of St Olav”. The Fossvik Stone, found at Evje in Aust-Agder, is most likely a rune-stone marking ship ownership. It says «Ånund from farm Horn owns me». Such a stone was put on land when the ship was moored.  The Galteland stone from Evje is a historical marker from 1020 about the expeditions to England and was risen in memory of a son who died in battle. In Rakkestad, Østfold, we have just found a rune-stone from the time of the migration period, and Schulte is the first runologist who has come up with an interpretation of it.

The Nomination Committee for the Research Award 2019 emphasized among others that the professor has been involved in a new interpretation of how the runic alphabet Futhark evolved, questioning the organised reformation many others maintain occurred. The Committee sees Schulte’s explanation as a stronger and more compelling explanation for the transition from Elder Futhark to Younger Futhark.

They also point out that this evolutionary perspective is clearly presented in Schulte’s contribution to the recently published Norsk språkhistorie bind I-IV, in which he wrote the two chapters: Den eldste tiden (-700) and Vikingtiden(700-1015).  The complete book is based on new research of Norwegian language. One of the main questions the scientists aim to answer is how language evolves and why language evolves at all. Schulte was a member of the Board from the start in 2008.

The committee also emphasized that Schulte has done research on something as fun as the Viking board game hnefatafl and chess. He argues that there used to be a vast network of travel routes that included both Austrleið and Vestrleið. In his research he highlights that the theory of the eastern route is supported by chess terminology such as: gno. mát and skák, words derived from Arabic that may have been transferred into Norse without any direct Latin influence.  Schulte’s contribution thereby presents us with a new scientific perspective on Persian-Turkish-Nordic linguistic and cultural interactions during the Viking period and early Middle Ages.

The professor has an extensive international network of contacts, and his work is of great impact. He publishes in English, German Norwegian and Icelandic, and has recently published the textbook Urnordisch about Old Norwegian and Old Norse.

At present, Michael Schulte participates as an international collaborative partner at the research unit Eichstätt-München in the long-term project RuneS ('Runic Writing in the Germanic Languages'). This unit has its basis at the Göttingen Academy of Sciences and Humanities. He is moreover involved in Germanische Altertumskunde Online, a German online lexicon for the study of Germanic languages and culture, and the study of closely interacting cultures. Professor Schulte also contributes strongly to popular science and in making scientific research accessible to the general public.

The jury received a recommendation for the SKF Research Award 2019.  Professor Michael Schulte is an internationally renowned scientist with the University of Agder as his home ground.  His most prominent research is on Germanic and Norse linguistic history in a broad sense.  In his research he shows how new linguistic perspectives can cast a light on Norse language history. In this way, he has contributed with new insights and a revitalization of this area of research.

In addition to his magister thesis and PhD dissertation, Schulte has published about 80 articles, most of them at a high international level. He has moreover written several books and made approximately 100 contributions to international conferences and seminars.  For more details on Schulte’s research and his publications, we refer to the recommendation of the Nomination Committee.