As the first in the world, UiA now starts research on how regular exercise affects the linguistic ability in normally healthy people over the age of 65. 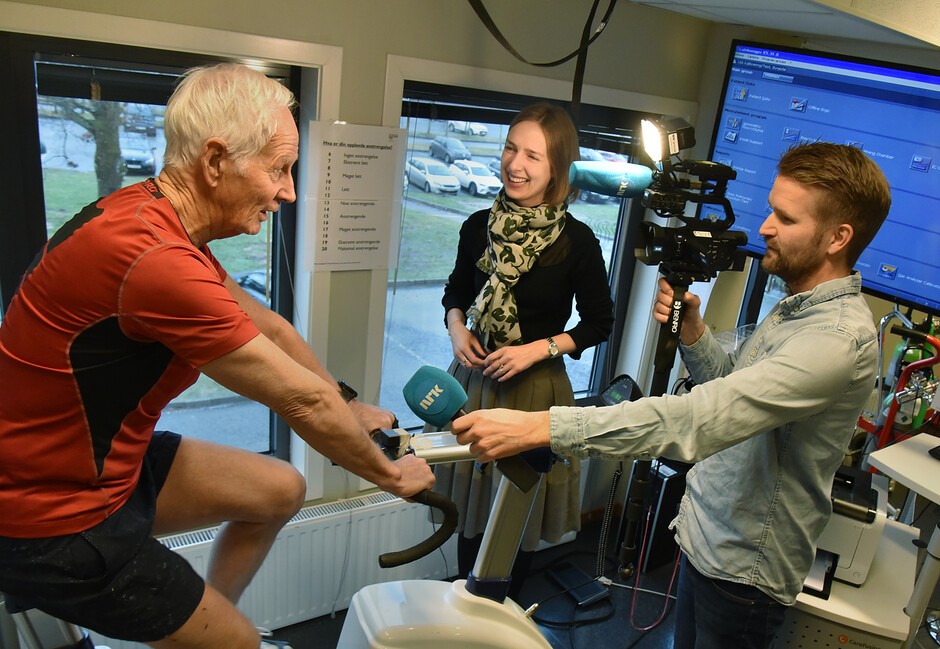 PROFICIENT IN LANGUAGES: “I am happy to take part in this research project. I am healthy and well, speak two languages and am elderly. And I want, of course, to contribute to improving the quality of life and strengthening the knowledge about us in our age group”, says pensioner Borgar Haugland (78), here accompanied by Minister of Research and Higher Education Iselin Nybø and NRK presenter Hans Erik Weiby at Spicheren.

This is clear after Minister of Research and Higher Education Iselin Nybø released the news that the Research Council has approved a FRIPRO application for the research project Fitness, Ageing and Bilingualism: The benefits of regular physical activity and bilingualism for language abilities in healthy ageing when she visited Kristiansand on Tuesday this week.

FRIPRO is the Research Council’s competitive funding scheme for ground-breaking research and allocates funds strictly on the criteria “best project”. 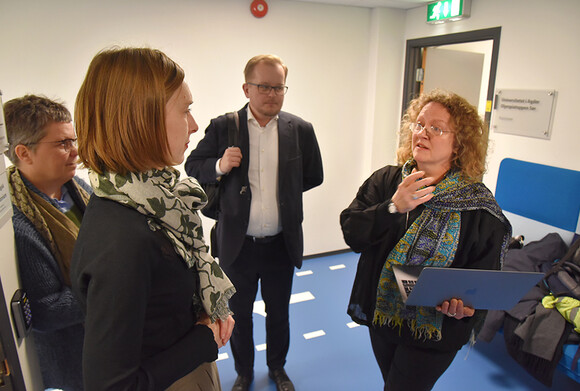 PROJECT LEADER: Professor Linda Wheeldon (on the right) tells Minister Iselin Nybø about the research that is going on. (On the far left) Professor Allison Wetterlin. In the middle is the minister's political adviser Kjartan Almenning.

“Important for the quality of life”

“I am very excited to hear what the researchers will come up with. We will have an ageing population in the future, and we know that both physical fitness and language skills are important requirements for a good quality of life in older adults. At the same time, we know that language skills decline with age, even in healthy elderly people. So, this is an area where more knowledge is of great value”, says Minister of Research Iselin Nybø.

In short, researchers at UiA will now recruit 160 generally healthy older people over the age of 65. They will be measured and weighed and assigned to a 6-month training programme.

Before they start, their language skills, both in the native language and in the foreign language they master, will be measured. The same thing is repeated when the training programme is completed. And based on their findings, the researchers will be able to say something about the relationship between ageing, physical exercise and language skills.

“This is an intervention study where we cannot say anything about the outcome in advance. But we know from other research that there is a connection between physical activity and language skills in older adults”, says Project Leader and Professor Linda Wheeldon at the Department of Foreign Languages ​​and Translation.

Academically, the three-year project is expected to have a significant impact on research in the areas of psycholinguistics, ageing, physical exercise, and cognitive neuroscience. It also contributes to ongoing debates on bilingualism in the field of psycholinguistic theory.

Furthermore, the project will explore the possible benefits of bilingualism and training in rela

tion to cognitive ageing, as well as provide critical knowledge of physical changes that may result from regular exercise. 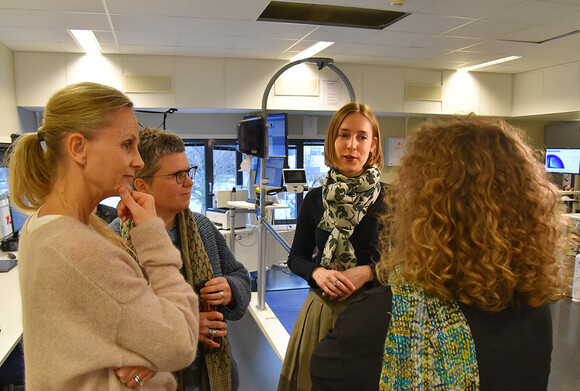 INTERESTED: “This is an important project”, says Minister Iselin Nybø. Here, together with Associate Professor Hilde Lohne Seiler (on the left), Professor Allison Wetterlin and Project Leader Linda Wheeldon (with her back turned).

“In addition to academia, our project, as mentioned, will also provide important data to fully utilise exercise and language training as lifestyle factors to maintain optimal cognitive function into old age, as well as provide motivational information to anyone who wants to overcome the increasing degree of physical inactivity that is often associated with ageing”, says Linda Wheeldon.

UiA also collaborates with the University of Birmingham in England on the project, which among other things contributes with special expertise in neuroscience.

“In addition to the 160 bilingual older people we will be studying in Norway, we also carry out a study on a group of 80 older people in England. The difference between the groups is that the Norwegian one is bilingual, whereas in England we recruit older people who only speak one language, English. In this way, we also hope to discover whether there in our case are any differences between monolingual and bilingual older adults, and how this might affect the relationship between ageing, exercise and language skills”, says Linda Wheeldon.

In the spring of 2020, two postdoctoral fellows and one research fellow will be recruited. The other researchers in the project are: