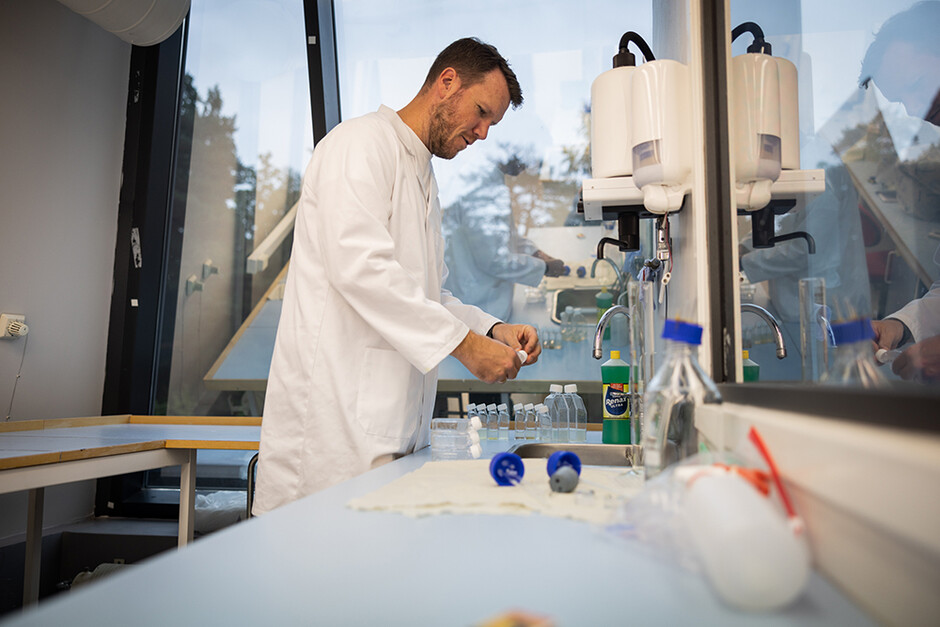 In the laboratory at UiA, Stian Borg-Stoveland cultivates microalgae in wastewater. If this is used more, the industry can become more self-sufficient and the coastal area spared emissions.

“The fish farming industry needs more sustainable and environmentally friendly food sources for its salmon. Microalgae have a favourable composition of nutrients and can be a good ingredient for fish feed.”

That is what Stian Borg-Stoveland says. He is a PhD research fellow at UiA’s Department of Natural Sciences and is affiliated with the Centre for Coastal Research (CCR) at UiA. He is also employed at Ecofishcircle AS in Farsund.

In his doctoral research, Borg-Stoveland works to find sustainable solutions for the production of fish feed.

Farmed salmon in Norway are mainly fed on imported soy products and fishmeal which is neither natural nor sustainable in the long run.

“Fishmeal has an unstable price due to the variable catch of fish used. As a replacement, farmed salmon get soy products since they are cheaper. We need to become more self-sufficient in the food we give our farmed salmon”, he says. 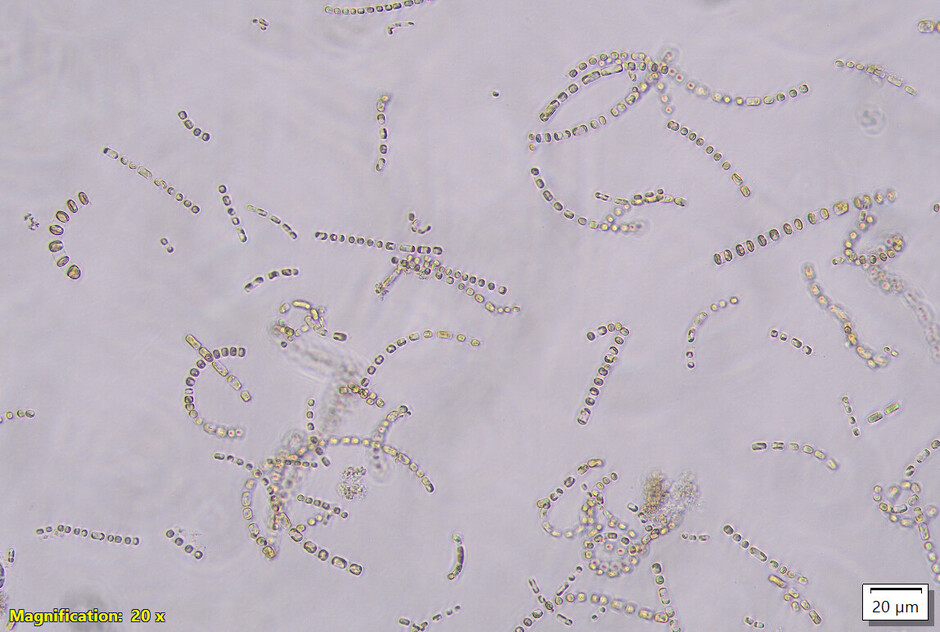 The species Skeletonema marinoi has several of the properties needed to grow in wastewater. In addition, the species has a favorable nutritional profile that fits well with the salmon's needs. This is one of the species Borg-Stoveland will take a closer look at in his research (Credit: Stian Borg-Stoveland).

In May, Ecofishcircle AS started operating a demo tank at Hausvik outside Lyngdal containing 4,000 smolt. The smolt weighs about 160 grams and will grow to about 4 kilos.

The plant uses a so-called recirculating aquaculture system (RAS) where the water is cleaned and sent back into the system. Around 95 per cent of the water is reused, while 5 per cent is replaced.

“The wastewater is full of nutrient salts such as nitrogen and phosphorus. Some of these nutrients come from fish faeces”, Borg-Stoveland says.

Borg-Stoveland plans to use the wastewater from the demo tank to grow microalgae. Microalgae are photosynthetic microorganisms that hold a great potential as a source of nutrients for use in food and fodder production. Algae have a high nutrient content and there can be great variation between the species.

Wastewater from fish farming and other industries is currently released directly to coastal waters. This leads to a number of challenges to organisms that live along our coast. It can, for example, lead to excessive fertilisation and the growth of unwanted algae in waterbodies in the farming area. 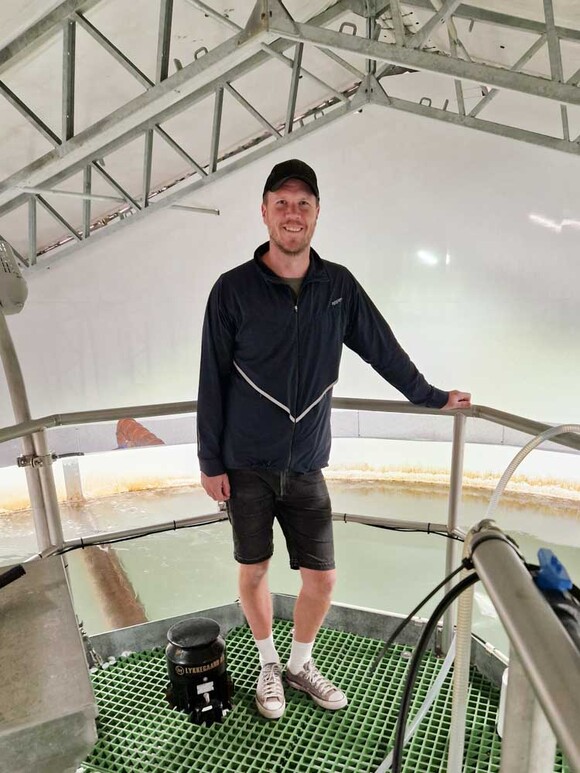 The test tank behind Borg-Stoveland is 10 meters in diameter and contains 160 cubic meters of water. 4,000 smolt swim in the tank. If the cultivation of microalgae in wastewater is used more, the industry can become more self-sufficient, and the coastal area saved from emissions.

“The unwanted algae strangle the normal distribution of seaweed and kelp and floats like a blanket on the surface of the water and blocks the light”, Borg-Stoveland says.

Another consequence could be abnormally high bacterial activity on the seabed near wastewater outfalls. Wastewater contains large amounts of organic matter which comes from fish faeces and uneaten feed, among other things. In coastal waters, this is broken down by bacteria using oxygen in the process. Areas of water with low oxygen levels impede the natural growth of plants and animals. The low oxygen levels in the Oslofjord have had major consequences for life in the fjord (Norwegian only).

“Wastewater should be used for something more sustainable to ensure we take better care of our coastal environment”, Borg-Stoveland says.

Growing microalgae from wastewater will be a double gain, according to Borg-Stoveland.

“Not only is the water cleaned of potentially harmful nutrient salts before it is released to the coastal waters, but research so far also shows that the microalgae produced can be used as an ingredient in fish feed. Which means that the food is locally sourced, and we get more reuse of unused resources”, he says.

Microalgae have a favourable composition of nutrients that are suitable for fodder. They contain important Omega-3 fatty acids that imported soy products do not contain. The nutrient composition of the algae can also be ‘designed’ by controlling the supply of light, temperature and nutrients during cultivation.

Borg-Stoveland is the first PhD candidate at UiA’s Department of Natural Sciences to complete his doctorate under the Industrial PhD scheme. This means that the company he is employed by, Ecofishcircle AS, partially funds his research. The research project has also clear relevance to the company’s activities. 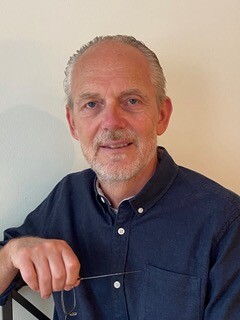 In the test facility in Lyngdal, they are developing sustainable land-based aquaculture for the future. The aim is to significantly reduce carbon emissions from fish farming on land. One way to do this is to capture Co2 and convert it into feed ingredients and protein that can replace imported soy products.

The company views all emissions as resources gone astray.

“In this project with UiA and Borg-Stoveland, we will utilise the waste materials and use them as nutrients in the production of fish feed”, says Jarle Dragvik, CEO of Ecofishcircle AS.

Microalgae mainly consist of single-celled microscopic phytoplankton. They perform photosynthesis and provide nutrition to animals in the sea and in freshwater.

What is the size of microalgae?

You usually need to use a microscope to see microalgae. They vary in size from 0.001 mm to 0.2 mm. During the spring bloom, however, microalgae can be seen with the naked eye as they form large collections consisting of billions of individual cells.

What nutrients do microalgae contain?

Microalgae primarily contain protein, carbohydrate, amino acids and pigment. They also contain a number of essential fatty acids which are vital in the diet of both animals and humans.

What are the advantages of producing microalgae for food and fodder when compared to traditional products?

• Microalgae can be grown in so-called produced water (wastewater). This means water that has performed its function in the production of land-based fish farming, for example.

• It takes up little space compared to the cultivation of wheat and soy which is currently grown on large areas of land.

• Microalgae can be cultivated all year round and they grow quickly. A ‘crop’ is ready for harvesting after about 14 days (some variation between species).

• They have a balanced nutritional content but can also be adapted to ‘end users’ by controlling the supply of light, temperature and nutrition during cultivation.