How the battle for local hospitals is fought

The People’s Movement for the Protection of the Local Hospital has fought to preserve local hospitals throughout the country for a long time. Two researchers from the University of Agder have mapped this struggle. 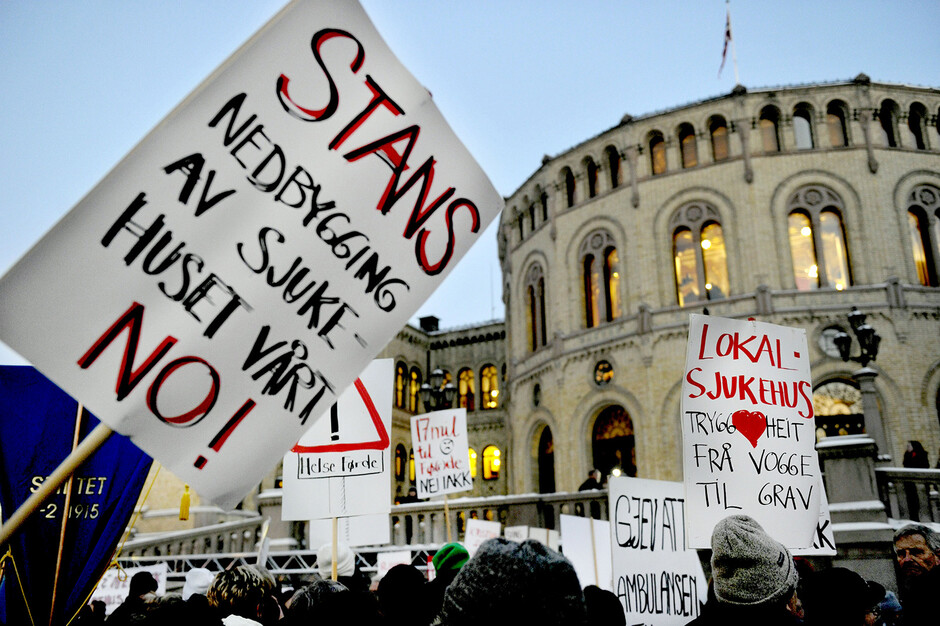 Protests against the closure of local hospitals have been going on for a long time. Here from a demonstration outside the Storting in 2016. Photo: Aleksander Andersen NTB

“Local hospitals have been fighting for as long as they have existed. But it was a different battle in 2002, when the hospital reform was introduced. At that time, management of the hospitals went from local to state management, organised as a health trust. The new form of government created a greater divide between the decision-makers and the people. Since then, the newspapers have followed the struggle closely”, says Associate Professor Dag Olaf Torjesen.

Together with his colleague Associate Professor Gro Kvåle he authored the research article ’Social movements and the contested institutional identity of the hospital’. The article takes a closer look at the blog posts written by the movement for the preservation of local hospitals from 2007 to 2017, and the ideas behind them.

“Hospitals have the same status as cornerstone enterprises have all over the country. But hospital experiences are often important milestones in a person’s life. It is life before and after a birth, surgery and diagnosis. It connects the hospital to the local community”, says Kvåle.

It is only natural that local communities react to the proposed closure of their hospital, or the weakening of hospital services. The researchers have looked more closely at how the battle is fought.

They have identified four perspectives the movement uses in its struggle:

• Weakening of offers and situation outside the cities

• Opposition to the health trust model

The safety and security argument emphasises close access to hospitals as crucial for health and safety in the local community. The argument is that the number of deaths from accidents and complicated childbirths will increase if local hospitals disappear.

The hospitals as a cornerstone enterprise is also a widely used argument. Local communities fear increasingly poorer services when local hospitals close. This has ripple effects for local companies, makes the local community less attractive and may prompt relocation.

When the local community feels that these three issues are not addressed by the health enterprise board, the result is a lack of trust in the entire governance model. The researchers find that the commitment to the preservation of Norwegian local hospitals is very closely linked to the governance model. This seems to distinguish the Norwegian local hospital movement from similar movements in other countries.

Should not be run as businesses

In short, health trusts mean that hospitals should be governed more in line with market principles. What kind of health care will pay off in the long run?

“Looking at profitability and cost-benefit is very unpopular. Hospitals can be so many things in Norway, but they should not be businesses. Linking profitability to something as emotionally significant as safety and security makes hospital enterprises a target”, says Kvåle.

“This is a mistrust that sits deep. The health trust boards are seen as enemies, and the entire decision-making process of the boards is considered illegitimate and ignorant. The popular movement for local hospitals wants to replace the enterprise model with a democratic model, which provides opportunities for local interests to be heard and taken into account in the political process”, says Torjesen.

Opposition to health trusts has gradually become a struggle that links several movements. Bunadsgeriljaen is one such movement, which battles to preserve and strengthen food supply in the districts. The organisation ‘Alternative to the health enterprise model’ has also been established. It works to find real alternatives to the current model.

“Based on our findings, it is no surprise that protests and campaigns continue, and that a new group has actually been formed that works to promote a new organisational structure and hospital governance”, says Kvåle.

However, despite both new and old opposition, local hospitals continue to be closed or their services reduced. The latest example of this is the closure of the maternity ward in Kristiansund, due to a lack of skilled personnel. Of the three examples the researchers examined, it was only in Odda that they succeeded in reversing the enterprise board’s decision, with the help of the Storting.

“If you look at the number of local hospitals in 2001 compared to today, the trend is clear; more and more hospitals are being closed down. But it is also clear that the People’s Movement for the Protection of Local Hospitals has managed to keep the debate alive, and the idea that hospital enterprises are undemocratic is gaining ground”, concludes Associate Professor Gro Kvåle.