Professor Ole-Christoffer Granmo has, in secret, developed a solution which will be quicker, simpler, and more precise than established methods for self-learning machines. The results were presented at a seminar at the Centre for Artificial Intelligence Research. 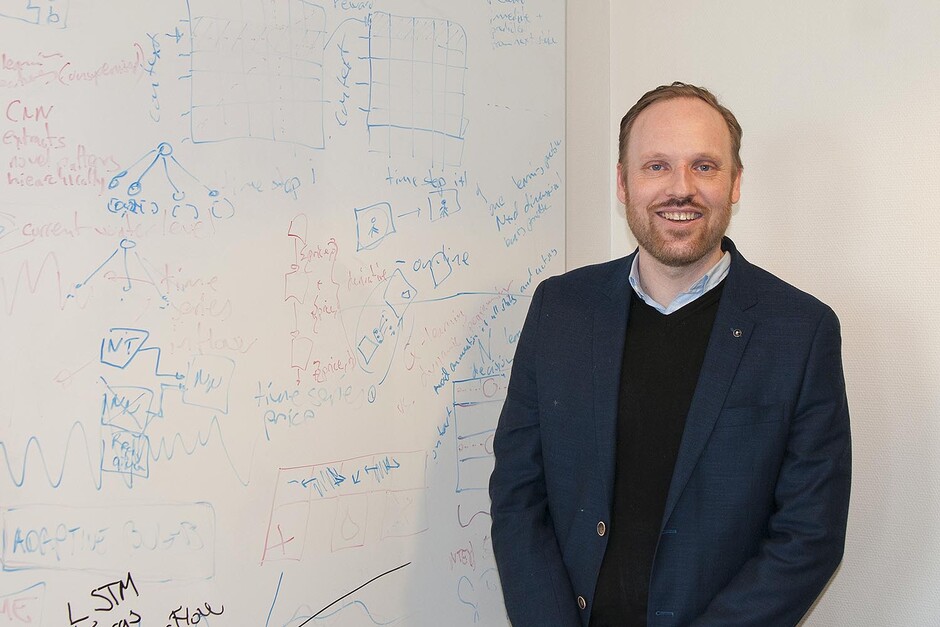 Professor Ole-Christoffer Granmo surprised everyone by presenting a new and simple method for formulae (algorithms) for machines with artificial intelligence at the anniversary celebration for UiA’s Centre for Artificial Intelligence Research.

Granmo is Professor at the University of Agder (UiA) and Director at the Centre for Artificial Intellignce Research (CAIR) at UiA.

Whilst researchers from around the world sit immersed in artificial intelligence and compete to find formulae (algorithms) with the help of established techniques, Ole-Christoffer Granmo has invented an entirely new one.

During the last year, he has worked with theories from the Soviet Union of the 1950s. Using the Russian mathematician Michael Lvovitch Tsetlin and his experiments training rats as a starting point, Granmo has developed a Tsetlin machine built using quite different principles than those used by today’s leading engineers working within artificial intelligence.

“This solution is quicker, simpler, and more precise than earlier methods,” says Granmo.

He presented the results at the one-year anniversary celebration of UiA’s Centre for Artificial Intelligence Research (CAIR). In so doing, he surprised both UiA colleagues and other experts attending the seminar.

The race for new findings within artificial intelligence is now going so quickly that Granmo, immediately after the presentation at the University of Agder, clicked on the send button in order to ensure that the research article would be published as quickly as possible.

In addition, he has two new research articles that he is working on. They will be finalised and sent to publishers shortly.

A significant amount of calculating power and considerable data access are prerequisites for the many breakthroughs in the use of networks with artificial neurons. These work together in clusters of computers with GPUs (Graphics Processing Units), and it is the GPUs which stand for the computing power.

Granmo and his colleagues at UiA’s researcher centre also work with such networks, for example, in diagnosis at Sørlandet Hospital and dam control at Agder Energi.

The same applies to Google Deepmind’s new machine, Alpha Zero. The Google machine was launched before Christmas 2017 and is one of the latest additions in this development – a machine which is learning, by itself, to play chess.

The Tsetlin Machine is simpler

“We know that the established method works, but there are also various problems with it. The method requires a lot of computing power. In addition, researchers do not always understand why and how it works. Therefore, we cannot explain this solution fully,” says Granmo.

Yet another problem is that the mathematical formulae in the established solutions are not designed for bits. As a result, they do not suit modern computers. Researchers have tried to develop new computers, but have not, as of now, succeeded.

“I wanted to make something which would suit today’s computers, and therefore it had to work with bits. In addition, I wanted to use simple mathematics so that the process can be both understood and explained,” says Granmo.

Tsetlin’s experiments training rats was based on the principle of punishment and reward. Granmo has transferred this concept to the Tsetlin Machine.

The Tsetlin Machine uses a number to remember experiences. The machine has learnt picture recognition  with the help of adding or subtracting from a number.

In addition, the machine is controlled by advanced sentence logic.

“The basis of the whole thing is sentence logic and mathematical knowledge on a first-class level,” says Granmo.

Granmo works in research groups with expertise in several areas within the field of artificial intelligence. However, this time he has worked completely alone.

“Everything was ready in my own head. It is a solution that I have been thinking about for a long while, not least because it is so simple and elegant,” says Granmo.

The computer is placed in the bedroom and carries out experiments and processes through the night. Sometimes, he gets up in the middle of the night to note down something that he has thought, or to read through a result or adjust something.

In the daytime, he might perhaps put the coffee on but forget to put the carafe underneath the coffee maker.

“When I am involved in processes like this, I close the world out. Then I can get through perhaps a hundred different ideas during just a few weeks. It is almost a trance-like state,” says the researcher.

After three weeks being in concentrated creative mode after Easter last year, Granmo emerged with the solution. He has carried out four case studies and almost a thousand tests, with pattern recognition and problem-solving in each of them. All experiments have been carried out both with the new Tsetlin method and the established one.

“In order to avoid random results, I carry out my experiments a hundred to a thousand times according to how complex the studies are,” he says.

The results are astounding. The Tsetlin Machine beats the established methods for both precision and speed in pattern recognition.

“This find means that everyone gets a new tool to work with. The tool can be used on language, power production and the understanding of pictures, for example in the interpretation of X-rays,” he says.

The next stage will be to make a deep-learning Tsetlin Machine. If Granmo succeeds, a great deal suggests that the established methods which Google Deepmind uses, for example, become old-fashioned.

“You will always prefer to work with solutions which are simple, understandable, and precise, and if the next stage confirms the finds from my first experiments, there will likely be others who prefer this method for making new formulae for artificial intelligence,” he says.