Gridd.ai Robotics is a company established by students at UiA. They have created a new virtual robot which uses complicated algorithms to accelerate digital transformation. 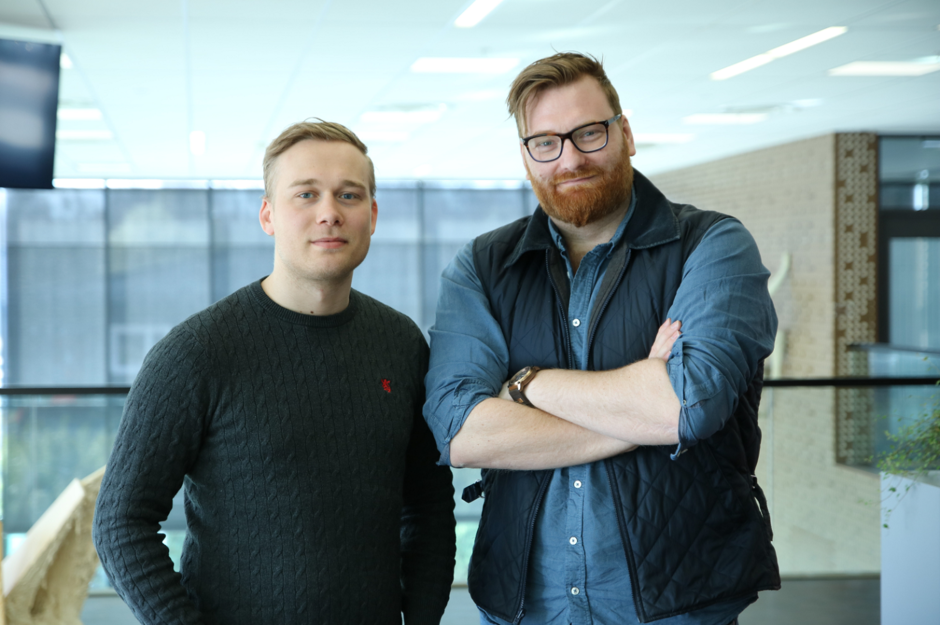 From the left: Lage Isachsen Gundersen and Johan Wedel.

Text and photo by: Ingrid Dihle

They have developed Conrad, a digital consultant who analyses and maps out internal processes by directly communicating with employees. By developing custom process modules, Conrad accelerates the digital transformation of organisations.

“Many private and public organisations, especially the larger ones, have difficulties collecting data to analyse and map out their internal processes. Conrad is a solution which drastically changes this process by reducing the need for consultants”, says Wedel.

Gridd cooperates with IBM (International Business Machines) and uses their artificial intelligence Watson to develop their algorithm. By digitalising processes within the company, the owners of Gridd hope this will result in a better and more efficient working environment.

“Many people get excited when they hear about what we have to offer. It solves a problem many have struggled with for a long time”, says Wedel.

Gridd is aiming to be an international organisation based in Southern Norway, which closely collaborates with the university and local businesses in the region.

UiA has several artificial intelligence research centres, which have been very useful for the development of their product. The professional environment combined with different study programmes allows the growth of the company.

“It is very motivating to work with developing a new technology when we are a surrounded by a supporting environment”, Wedel says.

Gridd is currently working with UiA Nyskaping, the University of Agder’s response to further encourage greater innovation. They offer student mentors and guidance from the local industry.

“We are very lucky to have mentors who match our international level of ambition. Many people in the industry believe in our product”, says Gundersen.

While developing their company, Gridd has established a student initiative called Team Gridd, a volunteer initiative where participants are offered courses and work experience related to artificial intelligence.

Team Gridd consists of students from language programmes, biology, political science and economy programmes. The programme is adapted to the students’ level of competence and progression, so everyone can have the opportunity to join. As a member of Team Gridd, students receive a general introduction to artificial intelligence, and the opportunity to develop Conrad, Gridd’s own virtual robot.

“We want to create a student environment which is open and free, and where the threshold is low for discussion. The goal is to create an arena for knowledge-building in a social context for students who have an interest”, says Wedel.

In today’s society, there is an increased awareness on how artificial intelligence will affect jobs in the future.

“It is a very interesting skill to have on your resume. It is becoming more relevant for many different industries”, says Gundersen.

The motivation behind Team Gridd was to increase interest for artificial intelligence amongst students at the university.

“Many are curious about CAIR (Centre for Artificial Intelligence Research). Team Gridd is an opportunity for students who are not enrolled in a technical programme to learn more about artificial intelligence”, says Wedel.

Gridd hopes the initiative can continue in the future as an established student organisation. Both Norwegian and international students from all study programmes at the university is welcome to join Team Gridd.

This is how Conrad works: