Crash tests show that proper repair is crucial for safety

Crash tests conducted by UiA show that a collision can be more dangerous to the driver and passengers when the car they are in has been incorrectly repaired and collides for the second time.

Gulshan Noorsumar is a PhD research fellow at the Department of Engineering Sciences at UiA. She has previously worked for six years for General Motors in India and the United States, doing car safety simulations, among other things. (Photo: Damares Stenbakk).

Researchers at the University of Agder (UiA) conducted two full-scale crash tests at Farsund Airport Lista in December 2021. Preliminary findings show that vehicles that have been incorrectly repaired after a collision may be less safe if they get involved in another collision.

The tests are part of the research project of PhD Research Fellow Gulshan Noorsumar at UiA’s Department of Engineering Sciences. She describes the findings as sensational.

“The airbags deployed later than expected. This means that they have less time to stabilise. For those inside the vehicle, this could lead to greater or more serious injuries”, Noorsumar says.

A number of different advanced sensors were installed in the test vehicles to be able to record all the necessary data. The vehicles were also 3D-scanned both before and after the crash tests.

The process of processing and analysing the collected data is now underway.

“The tests in connection with Noorsumar’s research are quite unique with regards to the instrumentation in the vehicle, among other things”, says Professor Kjell G. Robbersmyr, who also has the role of mentor for Noorsumar.

Noorsumar is currently working on developing a mathematical model for vehicle crash testing. The model must be able to predict the extent of damage in a given situation.

“The aim of my research is to show how mathematical models can be used to simulate the effect of a collision. The car industry can reduce its costs significantly if it can carry out fewer physical crash tests during the development of new vehicles”, she says.

In short, the first crash test involved smashing the test vehicle against a brick wall at 50 kilometres per hour. The same car was then, in another test, struck on the side by another vehicle.

The test vehicle was modified in advance to resemble a collision-damaged vehicle, which had not been repaired in accordance with the manufacturer’s specifications after the collision.

The hypothesis that was to be tested was whether an incorrectly repaired vehicle would perform as expected in terms of safety in a collision.

According to Noorsumar, the outcome of a collision involving an undamaged and a repaired vehicle can be very different. If a vehicle damaged in a collision is not repaired in accordance with the requirements, there is an increased risk of greater structural damage to the vehicle as a whole in the event of a major collision.

“Collisions involving such vehicles can therefore also lead to more serious injuries for those inside. This is one of the things we examine using the data from the crash tests”, Noorsumar says. 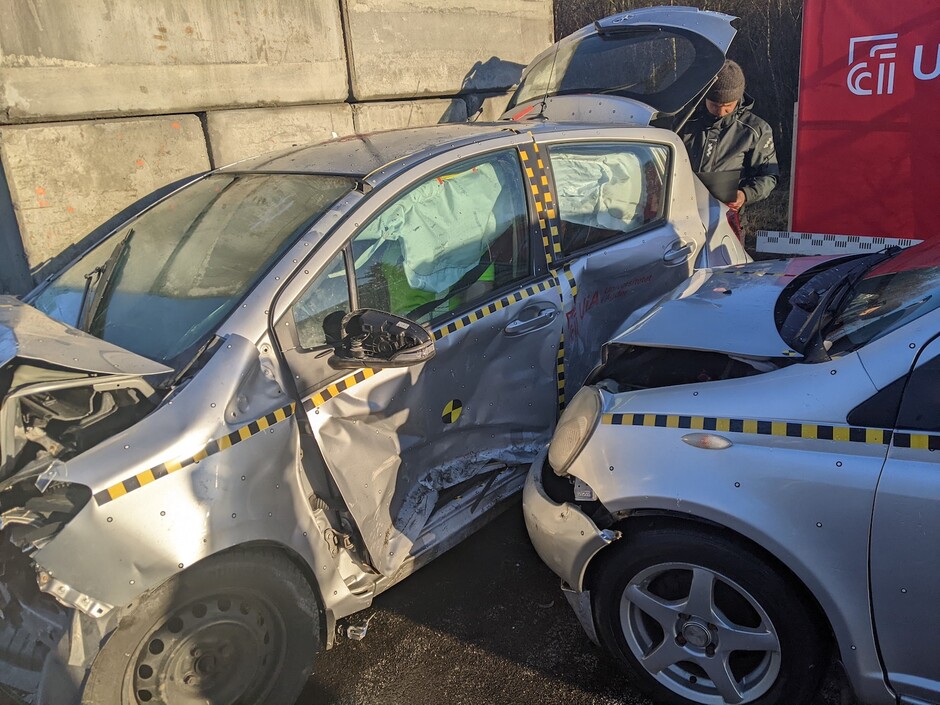 The two test cars were equipped with a number of different advanced sensors to be able to record all the necessary data. The vehicles were also 3D-scanned both before and after the crash tests. (Photo: Harald Sauvik)

Other findings suggest that incorrect repair methods can impair the vehicle safety features in a collision.

Noorsumar explains that vehicles today are designed to absorb the force from a collision in the most efficient way possible to protect those inside.

The lighter the vehicle, the more difficult it becomes to maintain the safety standard. New and lighter vehicles are therefore equipped with very advanced technology to increase safety.

“With the current manufacturing methods used, it may turn out that vehicles do not tolerate extensive damage repair as well as expected after a major collision”, Noorsumar says.

Researchers at UiA who focus on road users and vehicle safety are among those who eagerly follow Noorsumar’s research.

Through her work, they will be able to test new methods and very advanced equipment for technical inspection. This will make it easier to detect whether faulty repairs have been carried out on collision-damaged vehicles.

“Improperly performed repairs are unfortunately not only a national, but also an international problem”, says Bjarne Hæstad, who is one of the study coordinators at the road users and vehicles programme at UiA.

The technological development in the automotive industry have made vehicles more advanced and complex. This places great demands on those who carry out repairs, Hæstad emphasises, and especially on repairs of vehicles that are extensively damaged after a major collision.

“Both car manufacturers and repair shops must follow these developments closely”, Hæstad says.

Hæstad explains that Noorsumar’s research will also have great utility value for the project «Safe car body repairs». This research and development project at UiA investigates how to check that vehicles have been repaired in accordance with the manufacturer’s procedures, and that the quality of the car is the same as before it was damaged.

“In connection with inspections, the Norwegian Public Roads Administration has found vehicles that have not been repaired in accordance with the factory’s specifications”, says Hæstad.

Researchers at UiA and Agder Research have previously conducted crash tests to certify crash barriers and lighting masts for the Norwegian Public Roads Administration. The crash tests in December 2021 were carried out in collaboration with researchers affiliated with the Top Research Centre Mechatronics (TRCM) at the Faculty of Engineering  and Science at UiA.