Christmas campaign for Fatema and her family on Lesvos

UiA has a long and warm relationship with Lesvos, the island in the midst of the migrant flow to Europe. Many people still arrive in the overcrowded Moria camp, among them a family with children who grew up in Hallingdal. 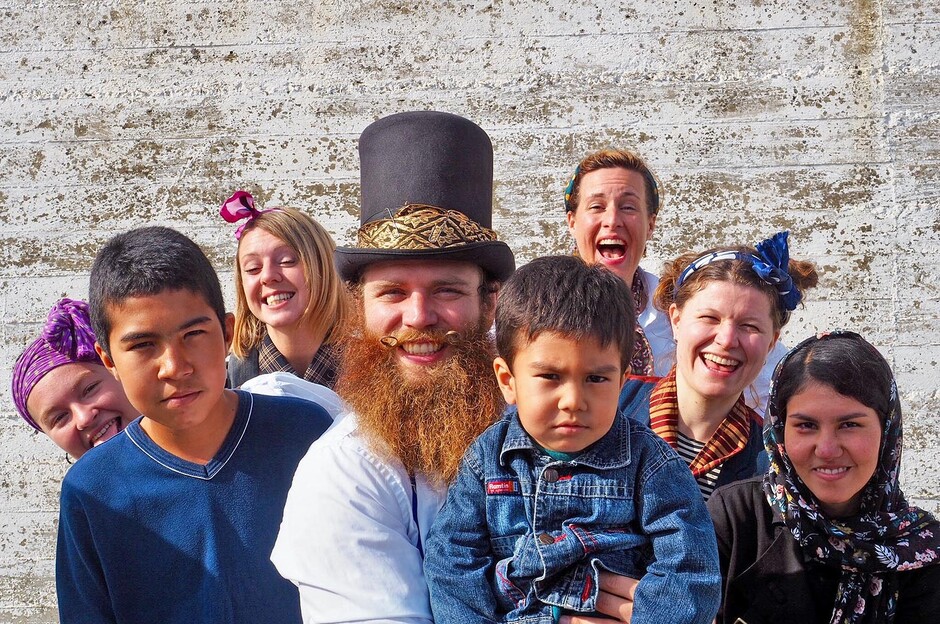 Here are Fatema (on the right) and Ahmad (on the left) together with good people. (Photo: Knut Bry)

Staff and students at UiA have on several occasions taken action to help improve the conditions for the refugees packed together in camps on the island while waiting to move on.

This year, the Faculty of Fine Arts organises the Christmas lunch. During a stay in Metochi in October this year, a group of continuing education course participants met a Norwegian-speaking family.

So did Philip Lothe from Urix (the foreign affairs television news magazine from the Norwegian broadcaster NRK). Read his Letter from a Correspondent from 30 November this year about his meeting with Fatema and Ahmad from Hallingdal, deported from Norway and currently on Lesvos: “This feels wrong. That is all I am thinking” (only in Norwegian).

Nina Johnsrud from the daily newspaper, Dagsavisen, met the family in Kabul in 2015: “The family fled from the Taliban” (only in Norwegian).

Anne Mone Nordahl from NRK Buskerud wrote the piece “Life after Norway” about the family, published 7 November this year (only in Norwegian).

Now you can also contribute

Read the story about adviser and student counsellor Mie Gadea Reibos and her meeting with the family in October. Then you can donate to the Christmas campaign if you like – to Vipps number 103923.

Proceeds from the campaign go to Lesvos Solidarity, the organisation that runs the Pikpa camp that the family moved to last Monday. The Norwegian photographer Knut Bry, who many people at UiA know from the photos he has taken at Metochi is one of the driving forces in the camp. 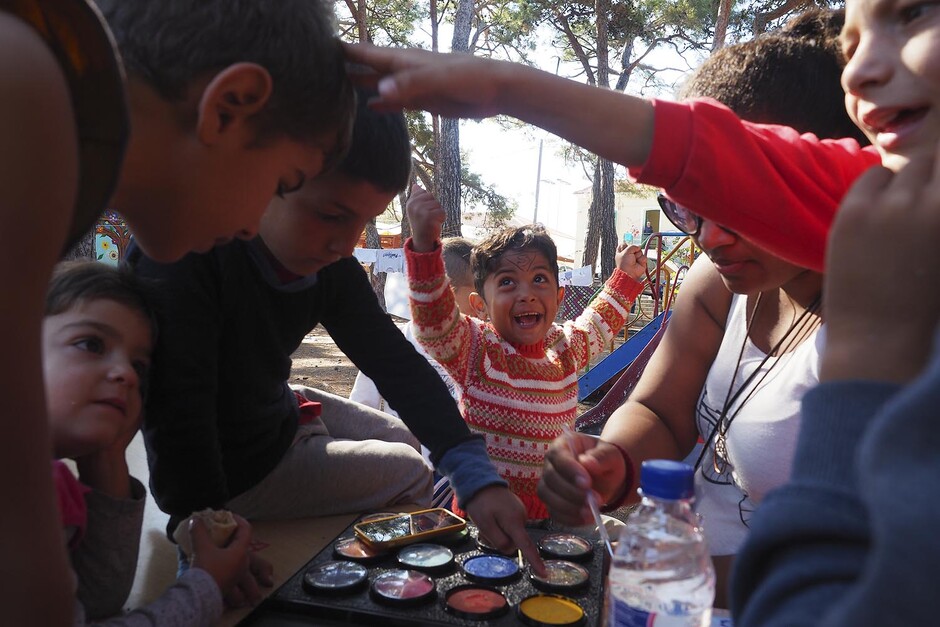 Not everything is sad and dreary, even in a refugee camp. Joy is found in little things. (Photo: Knut Bry)

Adviser and student counsellor Mie Gadea Reibo met a Norwegian-speaking refugee family at Metochi in October. It was thought-provoking:

As an employee and student, I took part in a continuing education course at UiA’s study centre in Metochi on Lesvos in October. I remember feeling fortunate to be given the opportunity to study in such an idyllic setting.

While I was walking around the convent, taking in all the impressions, I saw a small family enter. They looked like they were locals in the company of a Western man, but then I heard that the children spoke fluent Norwegian.

It turned out that Knut Bry, who works as a volunteer in Pikpa camp, had heard about a Norwegian family staying at camp Moria.

Camp Moria, which is known as ‘hell on earth’, was originally meant as a temporary residence for up to 3,000 people, but in September this year the number of refugees passed 10,000.

After a long search Knut Bry had finally managed to find the family and had taken the mother and the three children out of the camp for a few hours.

Reality spoke to us

We students were of course aware of the large flow of refugees and the overcrowded refugee camps on Lesvos, but now the reality was there talking to us in our own language.

The oldest child aged 16 looked familiar, and when she started talking I understood who she was.

It was Fatema, the little girl I had empathised so strongly with five years earlier when she and her family suddenly and brutally were deported, from Norway where they had lived over the last four years, to Afghanistan, the country they had fled because of threats from the Taleban. A country she and her little brother no longer knew.

I remember a Skype interview I had seen with her when she was about 11 years old. The little voice told of the bombs exploding around them, that she was scared and that she did not understand what she had done to deserve this. She missed her classmates in Norway.

Squatting in the housing container

It was incredibly moving to see these two young people stand in front of us and tell us how they shared a container with three other families.

About how it was often so crowded inside the container that they could not sit down but had to squat because it took up less space.

About how they could stand in line for hours to go to the bathroom, and how they lived under very unsanitary conditions.

It occurred to me how naïve I had been who had just taken it for granted that things must have been resolved for Fatema and her family.

That they were probably back in Norway a long time ago. They are definitely not. 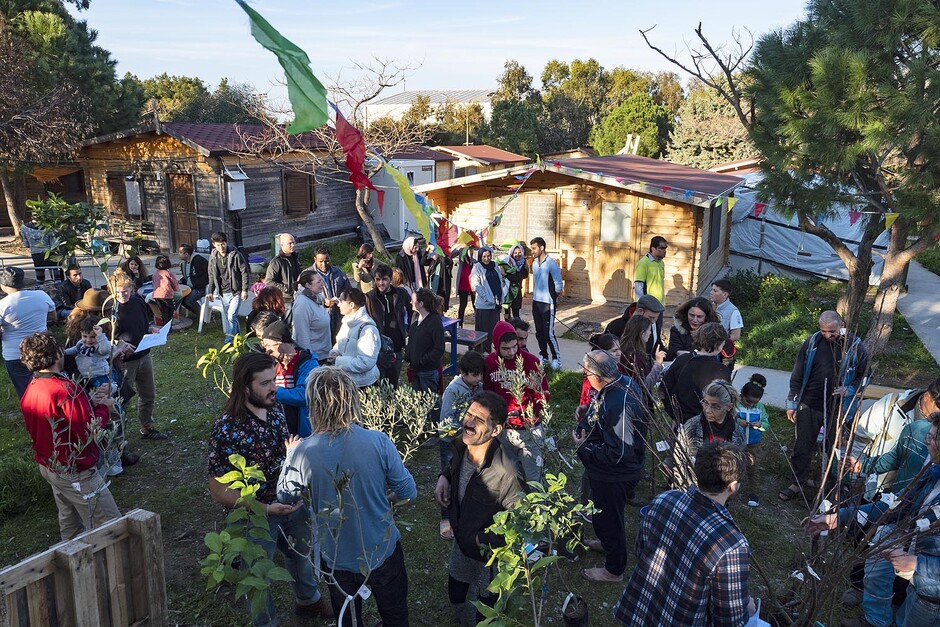 In a small rubber dinghy

After a few years as internal refugees, the family had to flee again.

In a crowded rubber dinghy, like many others, they risked their lives to get across from Turkey to Lesvos.

There were as many adults as children on this boat and at one point it looked like it would sink. Luckily help arrived, and Fatema and her family were rescued onto another boat and set ashore on Lesvos.

We were not prepared for this powerful encounter, but we rummaged through our rooms looking for things they might need.

Soaps and shampoos, chocolate, blankets and other trinkets were given to the family.

And we collected the cash we could on the spot.

When we asked Fatima what she wanted most from Norway, the answer was books. She has not been to school since she was deported from Norway. And Norwegian is the only language she can read.

Now before Christmas, I think more and more about this family.

How could they the survive in Moria now that the cold had set in? What will happen to them?

Contacts I have in the support group recently told me they have been very ill lately.

Received residence in a better camp

Fortunately, the family has now – last Monday – been given residence in Pikpa, a much better refugee camp where the Norwegian photographer Knut Bry works as a volunteer. Bry has also taken pictures for and from the UiA study centre Metochi Anargyron for many years.

These are very good news, Pikpa is a refugee camp run by volunteers through Lesvos Solidarity. It is still a refugee camp but with a limited number of residents and much more humane conditions. Now the family can face Christmas with more hope. 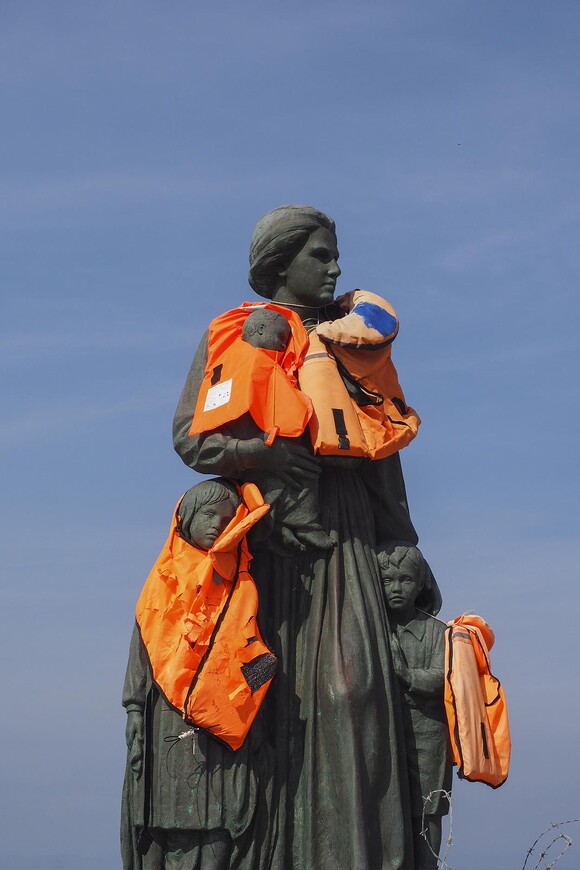 We at UiA enjoy our study centre at Metochi.

It is a luxury, and with it comes responsibility. We have to give something back to Lesvos.

On the occasion that the Faculty of Fine Arts organises the staff Christmas lunch this year, we have launched a Christmas campaign to raise money for Lesvos Solidarity and Pikpa camp.

This is how you and I can give of our abundance to Fatema, her family and everyone who lives in Pikpa. This camp, which mainly accepts refugees who are particularly vulnerable, such as pregnant women, people who are ill and families with children, is funded by donations from donors.

To ensure continued operation, they depend on us and others to continue to donate. In the spirit of Christmas, I would therefore likt to encourage everyone who can to make a contribution to our Christmas campaign.

At the Christmas lunch we will show some pictures of Pikpa camp and of the family.

You can give your donation to Vipps number 103923

All the funds go to the camp and its continued operation.