UiA professor Ole-Christoffer Granmo’s Tsetlin machine is part of the new exhibition at the Norwegian Museum of Science and Technology. 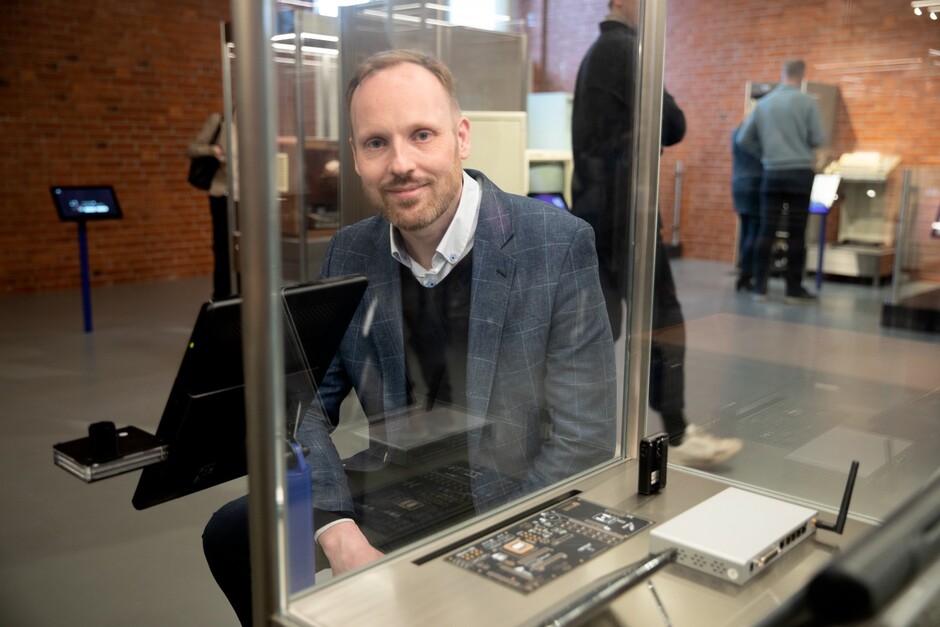 UiA professor Ole-Christoffer Granmo at the Norwegian Museum of Science and Technology next to the data chip that contains the code for the Tsetlin machine.

This is a permanent exhibition, and it was opened by HRH Crown Prince Haakon in Oslo on 7 April.

Among the 350 objects in the exhibition, the telegraph machine from 1908 is the oldest and Ole-Christoffer Granmo’s Tsetlin machine is the youngest.

“This is great fun. It is an exhibition that not only looks back but shows the importance of artificial intelligence in the future”, says professor at the University of Agder (UiA), Ole-Christoffer Granmo. 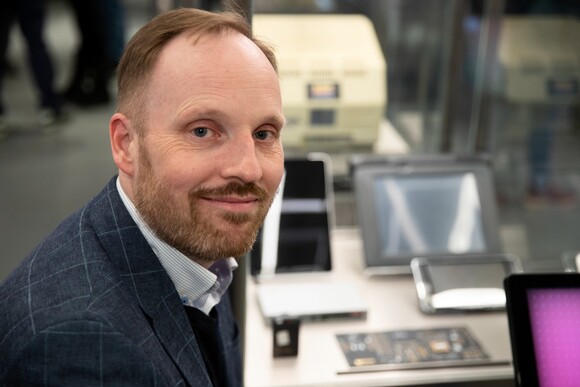 The Tsetlin machine is based on propositional logic. Ole-Christoffer Granmo wants it to be freely available and to act as a counterweight to the type of artificial intelligence used by the big technology giants.

Granmo heads UiA’s Centre for Artificial Intelligence Research (CAIR) and is the man who developed the Tsetlin machine, which was first launched in 2018.

The Tsetlin machine is not a machine. It is code used by artificial intelligence. In the exhibition, it is represented by a newly created computer chip, and is introduced as follows by the Norwegian Museum of Science and Technology:

The Tsetlin machine is not a machine, but a logical code to train an artificial intelligence in a computer, a machine learning algorithm in other words. What is revolutionary about the Tsetlin machine is that it is based on logic as opposed to number-based machine learning. This makes it faster, more cost effective and more accessible. The chip is currently used for various tasks in areas such as health care, finance and research.

Artificial intelligence from the five technology giants counts the number of instances of various phenomena. But it cannot explain why, for example, women and people of colour tend to score low on rankings.

“The reason is, in short, that this type of artificial intelligence only shows statistics and superficial correlations. It cannot show context and provide understanding”, Granmo says.

This is how he describes the major companies’ use of artificial intelligence with deep learning:

“It is a machine learning method that is trained to give the right answer by fine-tuning millions of adjustable parameters. The number of parameters and the connections between them become so complicated that the calculations do not make sense to humans. The answer that is calculated can thus not be explained. Since there is a lack of transparency, the method is called black box.”

Granmo calls artificial intelligence with deep learning parrot technology. He is not alone in that. It has become a common nickname among researchers. Even scientists at Google have joined the criticism of the parrot technology used by the major companies and have since been fired.

“Parrots can imitate human speech but not understand”, Granmo says.

He dislikes that the big technology companies are developing an extremely expensive and resource-intensive technology. It is also exclusively owned by the major players. Granmo’s vision is for the Tsetlin machine to be a counterweight.

Curator Henrik Treimo at the Norwegian Museum of Science and Technology curates the exhibition which is called I/O, which stands for input/output (Norwegian only).

“Our vision for the exhibition is for people to learn about the telecommunications and computer technology that has helped shape our society in the past and present, and which  will help shape us in the years to come”, Treimo says.