“A great ambassador for UiA”

Eqbal Dauqan has been appointed Cross-Cultural Bridge Builder of the year at UiA. 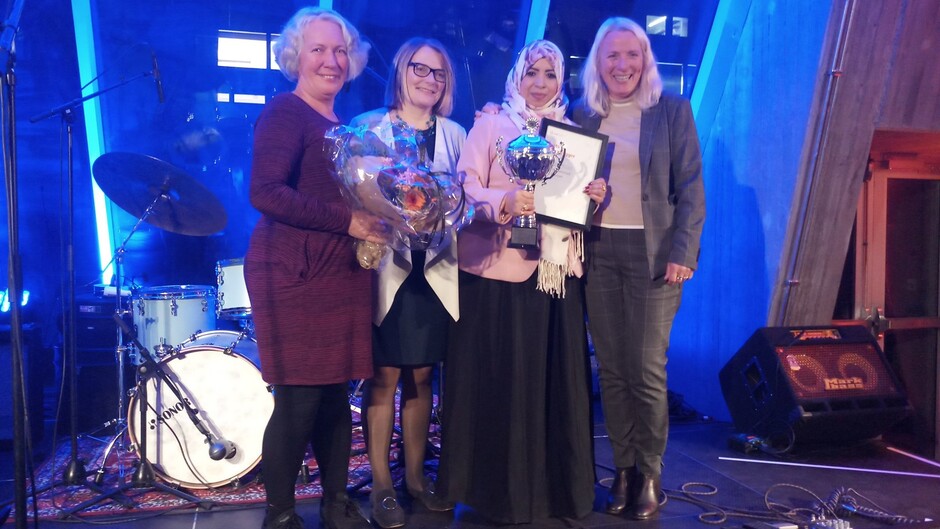 “Eqbal Dauqan is a great representative and ambassador for UiA. She has demonstrated this both at UiA and in national and international fora”, said Seunn Smith-Tønnesen, university director at UiA when presenting the prize.

The prize was awarded at the annual party for employees on 29 October in the canteen at UiA Campus Kristiansand.

Eqbal Dauqan came to UiA in the spring of 2018 through the Scholars at Risk Network (SAR), which cooperates with more than 500 universities to protect and strengthen academic freedom. Dauqan holds a doctorate in biochemistry and is currently teaching, tutoring and conducting research at the Department of Nutrition and Public Health.

According to colleagues she fit right in at the Faculty of Health and Sport Sciences and the Department of Nutrition and Public Health from the first day.

“Dauqan builds bridges internally and externally and generously shares her own culture. She seizes every opportunity to create multicultural relationships. By doing this, she promotes a common understanding and greater cultural tolerance. She also takes every opportunity to experience new things and take part in Norwegian culture”, Anne Merete Selvik Ask, head of the Department of Nutrition and Public Health, says on behalf of the department.

Dauqan received a standing ovation from the audience as she accepted her award. The award winner is pleased to work in Norway and to experience working life at UiA.

“I am so grateful for this award. I would like to thank the department and my colleagues for this nomination”, Dauqan says.

Dauqan says that the homesickness for friends and family in Yemen vanished as the reasons for her nomination were announced.

“When I heard all the kind words, I knew for sure that UiA was the right place for me. UiA is my home now and my colleagues are my family. It is important to preserve these relationships”, Dauqan says.

The justification for awarding Dauqan the prize:

This year’s winner of the Cross-Cultural Bridge Builder’s Award is an excellent ambassador of the University of Agder. She has used the opportunity to promote the university on many occasions, and wherever she is invited to speak, be it here on campus, at national gatherings or through international media forums both on subjects concerning her scientific expertise as well as within Science Diplomacy.

In June, she participated in a meeting at the European Union where she discussed the possibility of a prestigious collaborative research between UiA’s Priority Research Centre “Lifecourse Nutrition” and important leading scientists in this field from within the European Commission.

Acting as a role model, she also inspires other women from developing countries to pursue an academic career and contribute positively to socio-cultural development. She is a person who always looks ahead and aims to help others to succeed. She supervises for example two PhD students in Yemen and Malaysia. In 2017, she featured on the American media channel NPR as “the world’s most unstoppable scientist”. We at the University of Agder are incredibly proud to call this passionately dedicated scientist our colleague. It is with great pleasure we award this year’s Cross-Cultural Bridge Builder Prize to: Eqbal Dauqan!

Even though Eqbal has hardly been a year with us at the University, she already has been invited to seven international conferences and workshops where she has represented the University of Agder in general and in particular the Department of Nutrition and Public Health - where she is employed. She arrived at the University of Agder through the Scholars at Risk programme (SAR). This is an international organization with a network of over 500 universities all over the world, joining forces to protect and strengthen academic freedom. As we all know, following the world events at present, this work is more relevant and important than ever before.

However, Eqbal is not only a dedicated and highly competent scientist. She also stands out in how she communicates and interacts with others. She has been awarded this year’s Cross-Cultural Bridge Builder’s prize based on her unique skill to make contact and build bridges between her own culture and the cultures of others. Regardless of where she is invited, she takes the opportunity to make cross-cultural connections, and by doing so, increases mutual understanding and tolerance. With generosity and open-mindedness, she invites everyone she meets to celebrate and share the richness of her culture during religious festivities. At the same time, she will seize any opportunity to experience new things, and to take part in Norwegian culture. She has a cultural competence that is truly impressive and her commitment to taking a social-cultural responsibility is integrated into all aspects of her everyday life. She is very easy to get to know and interested in meeting others. There are already many of us here from different departments at the University whom she has befriended.

Eqbal works hard and embraces any new task with great courage. This despite the personal pressures she must live with; the concern for her family in Yemen and the insecurity about what the future may bring both for them and for herself.

Dear Eqbal, we so appreciate your initiatives and your contributions as a cross-cultural bridge builder. Our warmest congratulations on winning the 2019 Cross-Cultural Bridge Builders’ award!