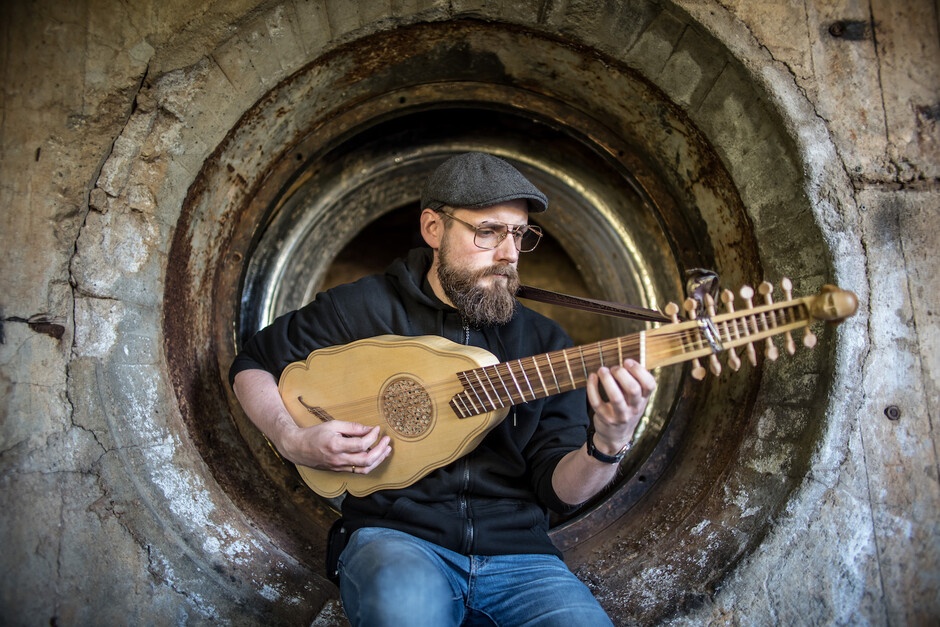 At the age of 32, Robin Rolfhamre has become one of Norway’s youngest professors. The lute player and early music expert is now hunting for new problems to solve.

In a music studio in Lund, Kristiansand, Robin Rolfhamre and Per Kjetil Farstad are listening to the day’s recordings. The two of them have played together as a duo since 2014; now, they are recording an album of lute music from the Renaissance.

“It isn’t just a teacher-student relationship any more. We have developed a friendship, and it is really good,” says Farstad as Rolhamre picks up one of the pear-shaped instruments.

The lute came to Europe with the Arabs in the 900s, but its popularity first took off in the sixteenth century. Now, an entire research field is dedicated to the stringed instrument, and the music which was written for it.

Farstad is one of the researchers. He started out teaching at the Music Convervatory in Kristiansand in 1976, and continued when the conservatory became part of the University College and then the University of Agder (UiA). Rolfhamre was awarded a professorship at the Department of Classical Music and Music Education at the end of 2018. Now it is he who is to take over the lute research – amongst many other things – at the university.

“I remember when I got my place at UiA in 2005. Per Kjetil rang me in Stockholm and said ‘Hi, I am going to be your teacher, and I am looking forward to getting to know you’”. Then I realised that it was here, in Kristiansand, that I wanted to be”, says Rolhamre.

Farstad is more hesitant, saying that he cannot completely recall the conversation. Rolhamre is certain of it though:

“Yes, I remember it well. Right afterwards, I went into a record store and found your album Classic Guitar Music from Four Centuries. And I had red trainers on!”

Robin Rolfhamre has been at UiA since 2005, first as a student, now as a professor. “I like that UiA is big enough to achieve things, but small enough that one can be seen”, he says.

For Rolfhamre, there are similarities to be drawn between the early music that he plays and modern popular music. In the Romantic period, the genius of the composer and the immortality of the music is central. In early music, the musical work was more a point of departure for the actual performance.

“A great deal of early music is dance music. It was a tool more than being a higher objective in itself. It would be wrong if we attempted to approach early music with the Romantic view of the work”, says Rolfhamre.

For him, rhetoric plays a large role in the music – elements which can create a “wow effect” and cause everything to simply hang together.

“At the end of operas from this period, it is not unusual to find dance forms that repeat themselves again and again. It might be that the king rose up from the floor on a lift, decorated in gold and accompanied by fireworks, and stands there like a sun on the stage whilst the artists dance around him. It is a rhetorical tool to build the king up politically. But it is not so different from something that could have happened at a Beyoncé concert either,” says Rolfhamre.

He knows that the comparison is tenuous, but it is another opportunity to recruit a new audience to early music: To speak the language of the audience, instead of pursuing the Romantic idea of the high-value work that the listener must learn in order to understand.

“Contemporary classical music sounds like plinky plonk for many, because they do not know what to listen out for. But if you set that same kind of modernist music as the soundtrack to a film like Planet of the Apes, it is awesome – because you know what function the music is supposed to have.”

Ambitions from the sick-bed 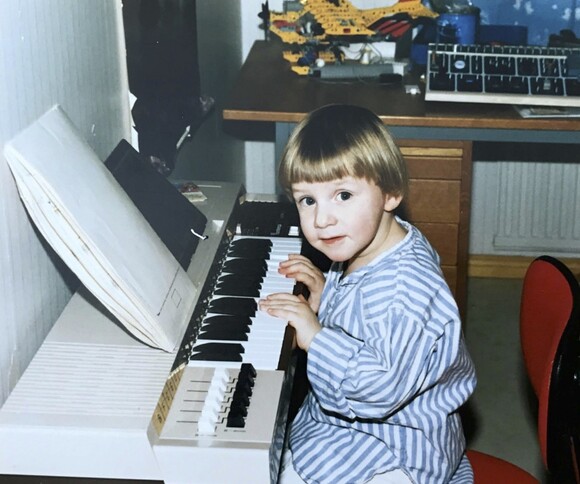 When Robin Rolfhamre was three years old, he had pneumonia for twenty-seven days. He was born with a deficiency of the immune system. When he was not at the hospital, he was mostly at home on the sofa watching films. In first grade, he was only able to attend school for around twenty days during the course of the school year.

“When I started at music school, many people had written me off. But I had ambitions and a drive that luckily the school saw,” says Rolfhamre.

The guitar teacher gave him home schooling at his hospital bedside, whilst another teacher filmed the teaching from the classroom with a VHS camera. When Rolfhamre was sixteen, he was able to be at school for half of the time. Since then it became steadily better. He still says that he is self-taught with regard to large parts of the primary and lower secondary school curriculum.

“It’s always been like that for me – if I don’t do it myself, then it won’t get done. And when I have decided something, it has to be done properly,” he says.

When he, as a child, went through the dinosaur phase, he made he own dinosaur bones from steel thread, paint and clay. Then he buried them together with his father, before digging them up again a couple of days later and hosting an archeological exhibition.

“This was how it was for me with the doctorate and the transition up to professor too. It is not the recognition that drives me on – that is a little bit embarrassing. But ‘cracking the nut’ is a great driving force for me,” says Rolfhamre. 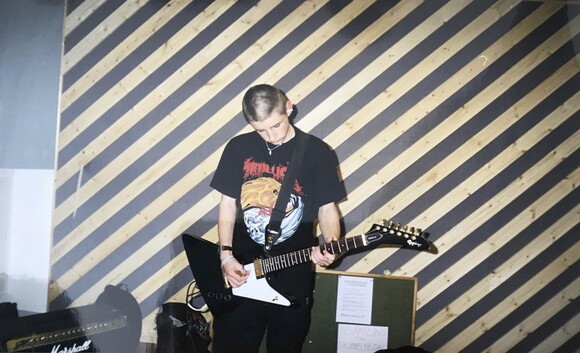 Robin Rolfhamre played in a metal band in the early 2000s.

At UiA, Rolfhamre cracks a number of nuts like this. He likes to write applications for external funding to the Research Council of Norway and the EU – a bureaucratic exercise that many researchers see as a necessary evil. He goes so far as to call application-writing his second main instrument alongside the lute. Rolfhamre also involves himself in the way that the university is run, and is considering standing for election to the University Board.

“I like that UiA is big enough to achieve things, but small enough that one can be seen”, he says.

His office is at the Faculty of Fine Arts. There, he can turn from his computer keyboard, pick up an instrument, and press “record” anytime he wishes.

One of his core ideas is something he calls informed play. Everybody who plays music from early times will, from time to time, wonder if they are playing the music as it should be played. In the case of early music, this has been a highly important issue for many performers. Rolfhamre is more concerned to have a pragmatic approach to the music.

“Those who have attempted to play music right from the sources will probably not have any large audiences. No matter how much we know about the history, we have to play something that people will listen to now,” he says.

Thus, it is not necessarily the case that something is right or wrong, as long as the music has knowledge in place and arguments can be made for why the rules might be broken.

“A great deal of knowledge is lost in music research. Music researchers are seldom practicing musicians at an international level. And many international performers don’t write down their thinking”, says Rolhamre.

He tries to consciously position himself in between these two points.

“I can use everything I do by way of artistic production in my research. And what I research has practical value for how I practice music.”

Rolfhamre places high demands on himself, and the high inner tempo has been demanding. When he was eighteen, he had an anxiety attack at the thought that he did not have a recording contract. Without anyone around him after the move to Kristiansand, he went into a deep depression for which he needed to enter therapy in order to receive help.

The last shot across the bows came in December 2016, when he found at the he had type 1 diabetes.

“I would not want to be without any of it, because it has made me into who I am today. But I can’t press myself as I did before. Before, I measured everything in life according to how I performed, but there is another Robin that I am learning about now. Paradoxically, I am very introverted,” he says with a smile.

In the studio, Per Kjetil Farstad talks about how Rolfhamre has a technique on the instruments that others can envy, and an academic career which is not inferior to the musical one.

“He is a real resource for our Faculty. He has a wide view on music, thinks clearly, and has worked well and steadily throughout the years. Now you are where you are meant to be, Robin. Now, life begins.”