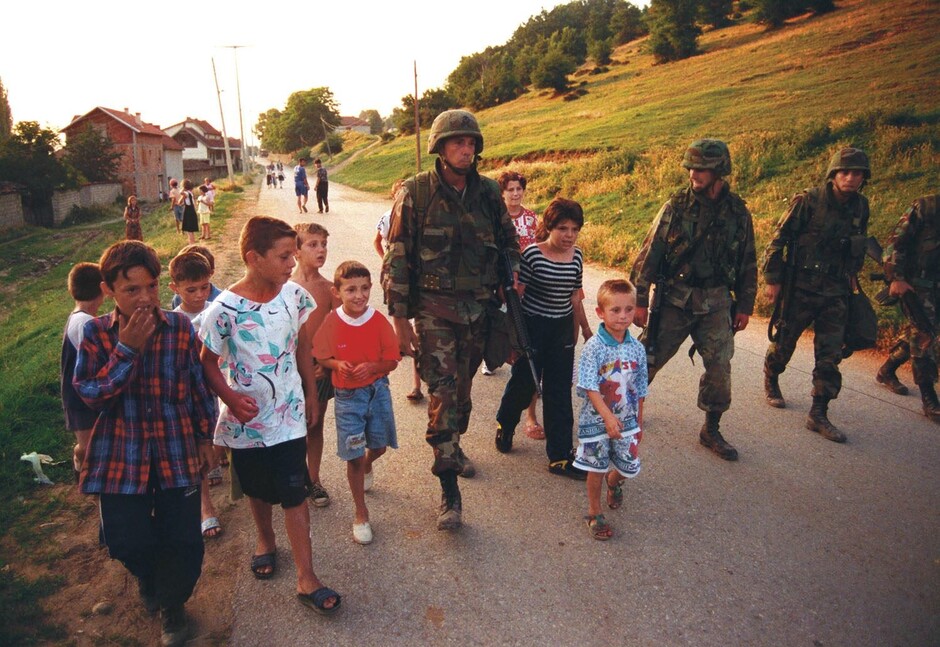 Investigating the power of a narrative

Two decades after the war in Kosovo, a new generation is ready to take over. At UiA, researchers have taken a European initiative in order to show how narratives about war and conflict can prevent history repeating itself.

After 20 years, there are many who now wish to be heard. They want somebody to relate what things were like before and during the war.

These are the words of Professor Kenneth Andresen at UiA’s Department of Nordic and Media Studies. Together with researcher Abit Hoxha, he has been central in the common European research project RePAST during the last year. The project highlights how old conflicts in Europe flare up sporadically, and split more than they unite the people who are affected by them.

“Many people are disappointed. They see that people who carried out atrocities against family members or themselves go off unpunished, many in the same positions as before. They want justice. But whether they get what they want is another thing,” says Andresen.

The conflicts of the past, today

This three-year project is funded with the help of 2.5 million Euros from Horizon 2020, the world’s largest framework programme for research. The consortium comprises 26 researchers from nine universities in eight countries in Europe. A large expert group of diplomats, EU bureaucrats, former UN workers and time and place witnesses from countries with internal conflicts who contribute as well.

Together, they look more closely at how discourses of conflict, in other words narratives and dialogues about the conflicts of the past, are selected and affect the conflicts of today. They also look at how this affects European integration which is central to the thinking about a European community. The initiative for this project was taken by Kenneth Andresen and Abit Hoxha.

“We don’t do this to create a common understanding of the past, but to create a better climate for understanding how the past both separates and unites. And we wish to do this in such a way that the coming generation is able to better see how the conflicts of the past do not always have to be part of creating conflicts today,” says Kenneth Andresen.

RePAST studies Cypus, Germany, Poland, Greece, Bosnia, Kosovo, Ireland and Spain. These are examples of countries that have experienced conflict discourses of the type at which the researcher group is looking more closely. Here, political and economic tension has the potential to split more than it does to unite both the individual countries in question, and the European Union.

A particularly powerful example of how old upheavals can be used again is in Bosnia and Kosovo. In the war between 1991 and 1999 in the former Yugoslavia, the various parties grasped hold of stories from as far back as the Middle Ages in their rhetoric of hate. Approximately 300 000 people were killed in the conflict, and over a million were forced to flee.

A murder in Londonderry in April

Another example is the Northern Ireland killing of 29-year-old journalist Laura McKee in April 2019. She was shot during a demonstration in Londonderry. A republican group called the New IRA is suspected to have been responsible. The murder came 20 years after the Good Friday Agreement from 1998 in which the various parties entered into a peace following 30 years of civil war-like conditions with several thousand dead.

“Those who are asked say that they don’t hear stories about what women experienced during the war.”

“Both Kosovo and Northern Ireland show how badly things can go. Our objective is therefore to investigate how countries in Europe handle conflict stories from the past when these show up again and affect solidarity and integration in the present. Our research will of course not solve everything, but it is a contribution to more knowledge and an increased understanding which can pull things in a positive direction,” says Kenneth Andresen.

“People do not want to hear about it”

So far, the mapping surveys of the Albanian and Serbian parts of Kosovo have been carried out.

“One of the first things that strikes you is that people who have experienced war, violence and conflicts – like in Kosovo – appear to have some general common attitudes and views after a certain period has passed. Amongst other things, many of those who were the victims of violence and fear during the war in Kosovo feel that it is important to talk about what they have experienced. They perceive it to be the case that most people do not want to hear about it though,” says Kenneth Andresen.

The young are less tolerant

The researchers have also found discrepancies in the extent of the nuances with which conflict-filled themes are addressed, based on the war story from Kosovo.

“Generally speaking, it seems as if there is a divide between those who experienced the war directly and those who are part of the first generation that followed it. The older ones are – insofar as they talk about the war and what they experienced then – more concerned about expressing nuances, as well as seeking an understanding of what happened. The young, who largely have indirect knowledge of the events, are more bombastic and black-and-white in their comprehension of what they believe happened.

“This shows how important it is to express the viewpoints of both sides in a conflict, because in that way the attempt is made to create understanding and less hate,” says Andresen.

Of the other preliminary findings from Kosovo, it is the gender aspect that comes out most obviously. The narratives of women, and their stories and voices, are underrepresented.

“Those who are asked say that they do not hear stories about what women experienced during the war. It is first and foremost the men’s stories that are told and which contribute to the nation’s history today,” says Abit Hoxha.

The research work itself is organised into seven work packages that are connected to their own respective European universities:

“At the University of Agder, we work first and foremost with finding out what roles journalism and social media play in terms of disseminating narratives from the past, and what this might mean for integration in the EU. We are good at this kind of research, and it is here that we can make a difference and contribute well within this joint project,” says Kenneth Andresen.

ON TV – Interest for the project is great in Kosovo. Here, Professor Kenneth Andresen is being interviewed on TV.

In Kosovo, interview-based surveys of focus groups show that the history from the war which is told on media such as in newspapers and on TV is less important for most people than oral stories in traditions.

“Most of those who are asked have heard about events and interpretations from family and friends. This is also what forms the basis of their story of understanding in terms of the war – of what happened and what its causes and effects were. They listen to their family and friends to a greater extent than they do the media and other sources,” says Abit Hoxha.

Provide recommendations for the EU commission

The researchers are still work collecting raw data in their respective work packages. But towards the end of the year, they will move over to a more analytical phase. Next year, it is expected that more and more thoroughly prepared results will be presented.

“It will be exciting in a while when the first results come in. But it will be even more exciting when the project is rounded off in 2021. Then we will gain a holistic picture and answer many of our questions – and perhaps also contribute to children and young people in Europe being able to live together better when their generation becomes adults,” says Kenneth Andresen.