The understanding of local food cultures and practices is essential in successfully designing sustainable health-related development projects. For this reason, Assistant Professor Wim Van Daele has contributed to medical development projects in Ecuador and DRCongo by sharing his expertise in the anthropology of food and medical anthropology. 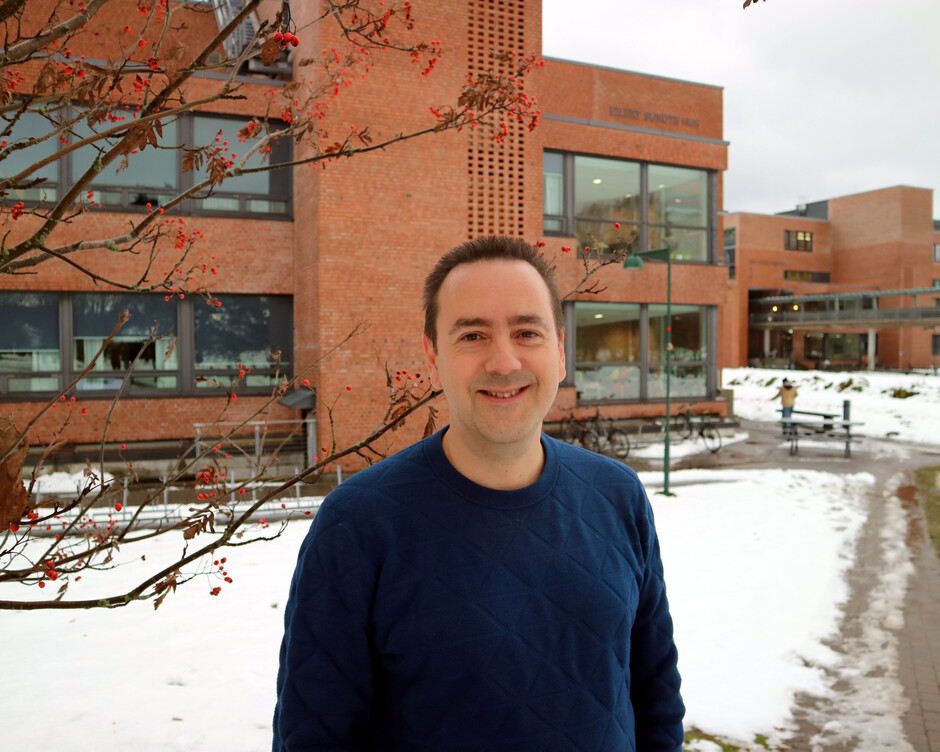 Understanding society through food: Assistant professor Wim van Daele has his interest in the socio-cultural dimensions of food, food production and health.

In October Wim Van Daele, assistant professor at the Department of Global Development and Planning, joined a team of pediatricians to the DRCongo. He was the first anthropologist to be invited by LUMOS - a medical development organization established by professors from the University hospital of the KULeuven - to join a medical team in their mission, together with Memisa - another Belgian medical NGO - to the partner hospital in Kisantu.

The role of Van Daele has been to formulate suggestions for improving the cultural sensitivity of the nutritional and medical projects in and around the partner hospital near Kisantu. As the pediatricians have mainly been working within the hospital walls - checking protocols for infant feeding, resuscitation and controlling body temperature -  Van Daele went outside of the hospital walls and travelled together with a community health worker to identify core issues in culturally informed food habits, food systems and health systems. These first-hand observations served to develop an action research programme in cooperation with the local partners, as part of the humanitarian work. He also matched his initial observations with the knowledge of the pediatricians to jointly develop locally adapted solutions for improving the nutritional state and general health of mothers and children. This is needed since DRCongo is one of the poorest countries in the world where life expectancy at birth is now only 60 years old and moderate to severe child malnutrition under age 5 is almost 43%. 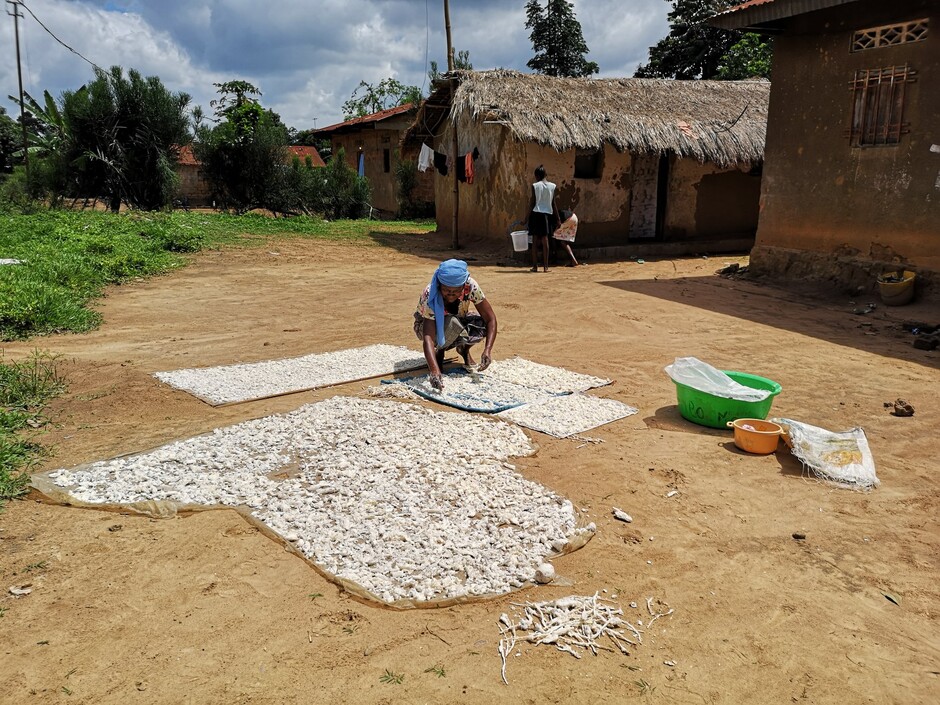 A woman drying the manioc in the sun to later pound it and make fufu, the local staple food. Foto: Wim Van Daele.

By travelling around, Van Daele soon noticed that a thriving subsistence agriculture is key to obtaining sufficient food availability and healthy nutrition in the rural areas of the zone.

- It was clear that all primary forest in the area had been cut and burned down to make space for slash-and-burn agriculture and for the production of charcoal. After a period of cultivation, they leave the field fallow and let a secondary forest grow to burn it down again after 2 years. These cycles are speeding up and the agricultural output seems to be decreasing, providing serious challenges to the subsistence of these people. The loss of the forest has also diminished the presence of wild animals and other creatures that added to the food palate and nutritional diversity. Together, all these changes have led to a decrease in the access to food and diversity of food intake. This affects the overall health of most people who have only 1-2 meals a day as well as of their children, Van Daele explains.

Driving around on a motorcycle, Van Daele also came across some hopeful initiatives in these rural areas that involved reforestation, fisheries, re-fertilization of the depleted soils, agro-forestry, saving groups and so forth. All these, he found, have an important potential effect on the general health of children, mothers and fathers.

One of his suggestions was to develop a closer collaboration across the different development actors and elaborate an integrated approach to improving nutrition as a long-term prevention against disease. He suggested such a cooperative initiative could revolve around the planting of edible plants and fruit-bearing trees, in accordance with the local customs of what is acceptable for consumption according to gender. Reforestation, mixed cropping, cash crops and savings groups were some of the other things pointed out as areas for closer cooperation. 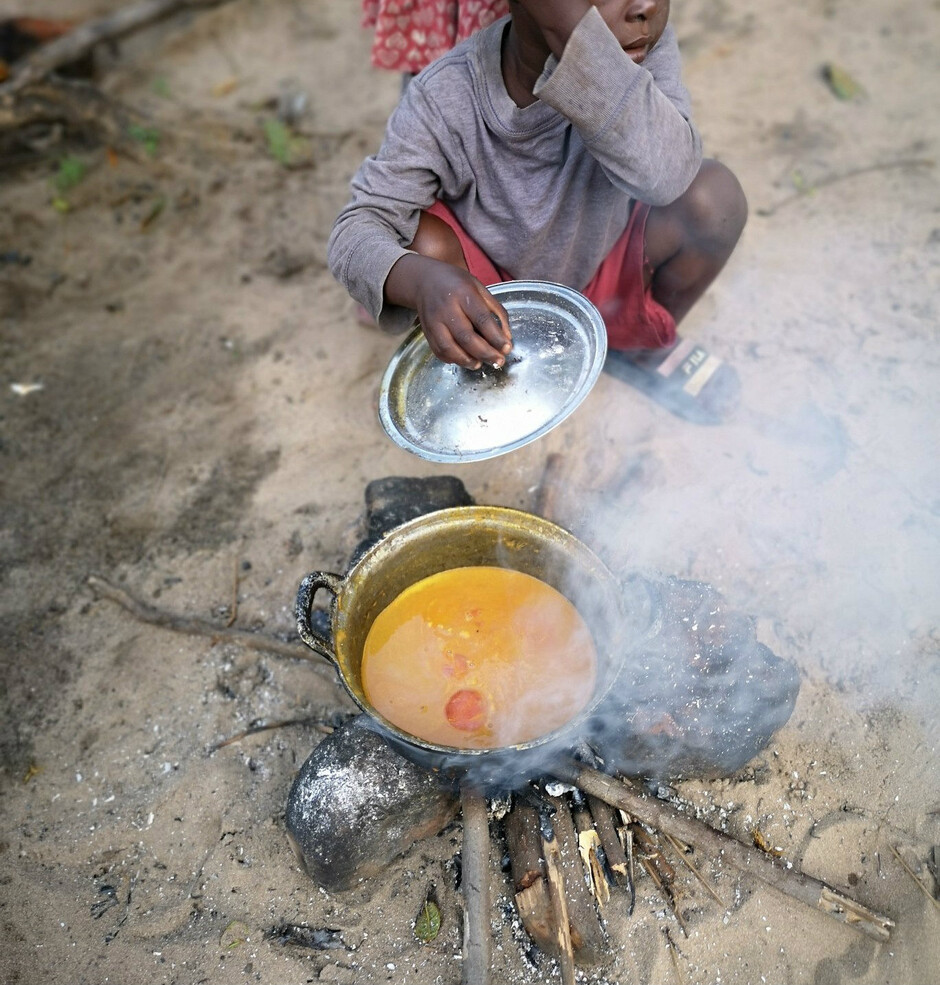 A young child watching over the cooking of palm nuts in the little pot, containing the only meal of the day for a family of 7. (Photo: Wim Van Daele)

Food system as a pillar of health

During his PhD in the anthropology of food, Van Daele developed a food systems approach following the lifeline of food throughout cultivation, procurement, preparation, sharing and eating of food, and the different ways food intersect with human life in various occasions. He studied the important role that food can play in shaping village life, cosmologies, political movements and economic policies. Through this research, he got increasingly interested in the central role that food plays in the South Asian health system called Ayurveda - the science of life. This is essentially an eco-health system that conceptualizes the human person as thoroughly porous and susceptible to outside influences. The various balances in body elements and fluids that lead to good health can be affected by the food intake, seasons, moral state, social relations and nature.

The relationship between “new” diseases and overheated globalization

Therefore, Van Daele entered into the field of medical anthropology, and he joined Thomas Hylland Eriksen’s research project Overheating. He studied the ways in which socio-cultural, ecological and political-economic changes have been condensed into the food system shaping human health. He particularly examined how stomach troubles, metabolic disorders, diabetes and obesity were conceptualized in biomedical and Ayurvedic and how they related these illnesses to wider ecological and social transformations as part of an overheated globalization. Delving into biomedical environmental approaches, he learned about the field of epigenetics—the study of the molecular regulation of gene expression where this molecular regulation is very responsive to environmental influences. 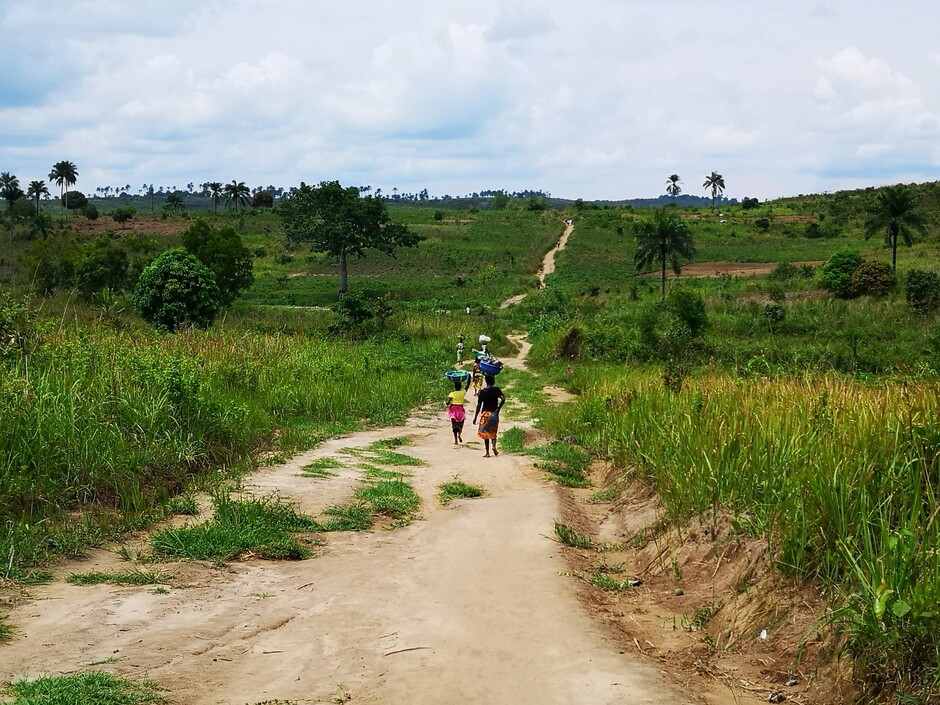 People walking through the agricultural fields toward the river, used for bathing, washing and drinking. (Photo: Wim Van Daele)

As part of these collaborations he has been invited to contribute to an inter-university development cooperation research project, intended to build capacity at universities in the global South. The project precisely has started a collaboration between medical, nutritional and anthropological researchers to understand the ways in which socio-cultural aspects shape the food intake of young mothers, that in turn shapes the quality of the breast milk, that again shape epigenetic processes and various microbiota of the infants and their health.

In this project, Van Daele lectured about nutritional anthropology and social approaches to epigenetics and microbiome research at the medical department of ESPOL Guayaquil and at IKIAM university at Tena as part of this capacity building. He also identified in collaboration with local anthropologists some important points for further study to facilitate the interdisciplinary connection of anthropology and the two microbiological fields in biomedicine.

He has been invited back to the DRCongo to conduct a first stage of short action research in the summer and also to Ecuador to give his expert input in the research carried out by the Ecuadorian scientists.

- I wish to work further on such interdisciplinary projects in development work and research to continue examining the complex systems interactions between food, body, health and environment, and to take advantage from the strengths of this food systems approach in that very engaged practice on the ground, says Van Daele.