Nina’s research may build bridge between theatre and politics

The theatre performance is over, but the impression left on the audience can last for a long time afterwards. UiA researcher Nina Skogli has provided fresh perspectives on the way we experience theatre as political beings and spectators. 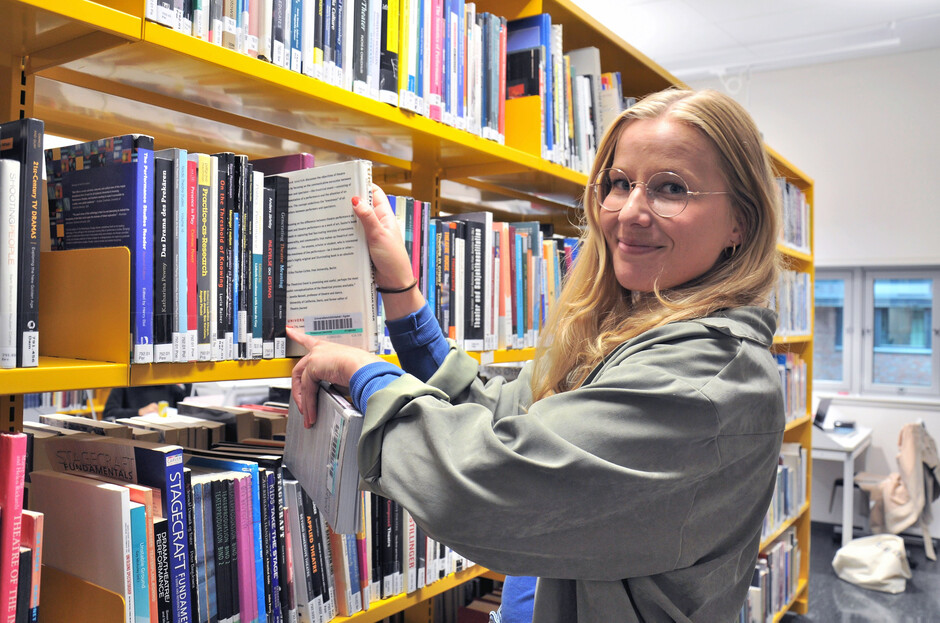 Nina Helene Skogli is a postdoctoral research fellow in the interdisciplinary research project Making Memories at the University of Agder.

Nina Helene Jakobia Skogli is a theatre scholar and has recently started her postdoctoral position at the University of Agder (UiA). Earlier this year, she defended her thesis entitled ‘Thinking through affect: Affective uncertainty in politically engaged contemporary theatre’ (In Norwegian: «Å tenke gjennom affekt: Affektiv usikkerhet i politisk engasjert samtidsteater»). Skogli has found a set of methods that preserve democratic principles in the analysis of theatre performances and the emotional uncertainty the audience may feel after a theatre experience.

The term affective uncertainty has been established by the researcher herself and stems from her interest in the sensory and emotional dimensions of politically engaged contemporary theatre. The word affect comes from the Latin affectivus and means ‘that which has to do with feelings’, or something that is full of feeling, emotionally charged or emotional.

Skogli examines how uncertainty is created in the spectator who becomes both emotionally and politically involved in the theatre performance.

A contemporary commentary on theatre

According to Skogli, the research project can be regarded as a commentary on the relevance of theatre in the present time. In her study, she combines methods from theatre studies and audience research. She delves into how people process their own political attitudes and the feelings of uncertainty generated by the performance.

“My thesis takes a closer look at the artistic strategies that make the spectator experience uncertainty. And I have seen how theatre productions have the ability to criticise phenomena, often political phenomena, in the present”, Skogli says. “How do we as spectators process these experiences?” she asks.

Uncertainty as an asset

Skogli’s research examines what affective uncertainty does to us as spectators and how people handle uncertainty as an experience in the encounter with theatre and drama.

The thesis addresses two juxtaposed themes which are approached from different angles. The methodological part of the thesis seeks to develop performance analysis as a method. This is done through concrete examples of how performance analysis can be extended to include the reception processes of spectators.

“In addition to this, there are the analyses of the critical potential that lies in affective uncertainty”, Skogli says and elaborates:

“Uncertainty as a character trait often comes with negative associations. It may be associated with fickleness, hesitation or an inability to act. But in this context, uncertainty is more about being able to see things from different perspectives and achieving a kind of sensitivity.”

Questions raised but no answers given

She points out that spectators can experience reception processes that are both demanding and long-lasting. And often they don’t produce any clear answers.

“This trains our ability to think and respond to pressing and difficult societal challenges”, Skogli says.

“In a time when we are surrounded by crises and where feelings and emotional appeals are used politically, it is essential that we improve our ability to think through what these emotional experiences actually do to us.”

“All three performances address complex and controversial social issues - without offering solutions to the problems outlined”, she says.

Facts about the project

How ‘should’ you react?

Skogli says that what the performances have in common is that they produce lasting emotional uncertainty. The performances address themes that challenge the audience in various ways. They have the potential to trigger a reception process that lasts longer than the ‘here and now’ of each performance.

“The three performances I examined do this in different ways using different dramatic techniques”, Skogli says.

Because what should you actually be left with after seeing a play about delicate political or social issues? Is there a recipe?

One of the performances is about the refugee crisis and immigration policies. The discussions that followed Barack Obama’s speech when he received the Nobel Peace Prize and used the term ‘just war’ are central to the second performance. The third concerns issues related to social inequality among young people and how this can influence their choice of direction and future prospects.

For two of the performances in the study, Skogli analyses her own spectator experience. She saw the third play, Against All Odds, twice with a group of students. The follow-up work consisted of conversations with the students and development of the experience over a period of around two months.

“Uncertainty linked to difficult social challenges is something that can persist. I think this is an underexplored area of theatre research, how aesthetic experiences can extend over time”, Skogli says.