With a budget of 25 million kroner, Making Memories will research how the war is portrayed in media such as fiction, film, theatre and television. 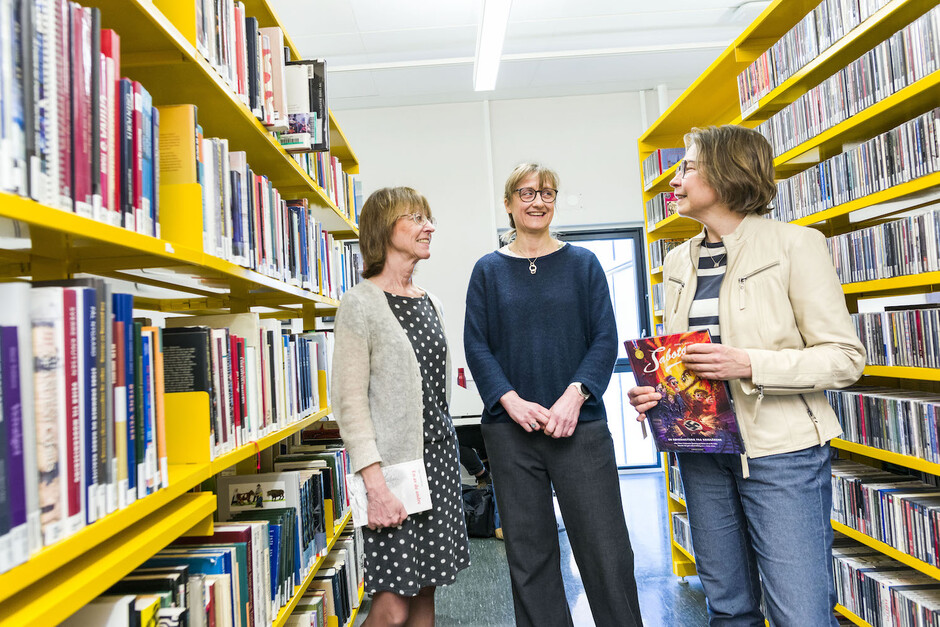 “The tools of fiction are very powerful. Seeing a representation of something you recognize, makes it more credible to you, regardless of whether it is true or not”, says Professor Unni Langås (left). Here with the other project participants from UiA, Associate Professor Siri Hempel Lindøe and Professor Siemke Böhnisch. (Photo: Kjell Inge Søreide)

“It is very easy to be seduced by fictions. Our ability to empathize can give us a naive view of history”, says Professor Unni Langås.

World War II ended more than 75 years ago, but interest in what happened has not waned. On the contrary. The war provides material for new interpretations in fiction, theatre, film and television, and in new forms of communication at museums.

The Making Memories project has a budget of NOK 25 million to investigate these trends in Norway. About half of the amount comes from the Research Council of Norway, the rest is funding from the University of Agder (UiA).

“Our starting point is that much of the general perception of war events is based on aesthetic representations. The ability of art to bring people and situations to life helps to create interest in what happened”, Langås says.

She is a professor at the Department of Nordic and Media Studies at the University of Agder (UiA) and leads the project, which is a collaboration between UiA, NTNU, the Falstad Centre, the National Library of Norway, Ludwig-Maximilian-Universität Munich and ARKIVET Peace and Human Rights Centre.

The past is not what it used to be

The researchers have much material to choose from. Many new Norwegian novels, from Marte Michelet to Karl Ove Knausgård and Kjartan Fløgstad, are about World War II. Other artistic expressions are not far behind either.

“Most people today did not experience the war, and that creates challenges. The topic has been explored so much that more is required of the interpretations, these representations also often cause debate”, Langås says.

She mentions the NRK production Atlantic Crossing as an example of a television series that is used to revitalize history, while it also has feminist intentions giving Crown Princess Märtha an important role in the story.

“The series is a good example that the past is not what it used to be. It is retold and adapted to current expectations”, Langås says.

The project has three approaches to analysing the topic, all starting with the prefix "post" (meaning "after"): Post-memory, post-nationalism, and post-22-July.

We have already touched on post-memory which is about how the stories about World War II have been recycled through more and more retellings.

“The tools of fiction are very powerful. Seeing a representation of something you recognize, makes it more credible to you, regardless of whether it is true or not”, Langås says.

She also points out that the memoirs published today also include books written by children and grandchildren of those who experienced the war first-hand.

Post-nationalism is about the national narrative we have about the war in Norway.

This narrative deals with what happened from 9 April 1940 to 8 May 1945: from the German invasion of Norway to the occupation which stabilized the fronts, with aggressive German occupiers on the one side and the heroic resistance movement on the other.

“This narrative about the war years has dominated our national self-image and is what is being maintained by the Armed Forces Museum and Norway’s Resistance Museum”, Langås says.

She says that this narrative is now being challenged by stories such as Marte Michelet’s book about the resistance, or the stories about Norwegian women who entered into relationships with German soldiers.

“There is a greater receptiveness to grey areas now. The post-national era allows for a lot more nuance when talking about the war”, Langås says.

The third approach to analysing the issue is to see World War II in the context of the terror attack on 22 July 2011. This is about how the war is brought up when politicians and commentators use expressions such as ‘not since the war’ and ‘never again’.

“One level of this is the comparison between World War II and the terror attack, and how the initial unity crumbled when people started to discuss memorials and how the grief should be expressed. Another level is that current terror is thought to have roots in history. Whether that is true or not, it is something that has been thematised in the literature”, Langås says.

She cites Kjartan Fløgstad’s novel Due og drone as an example.

The results of the project will be presented in an exhibition at ARKIVET Peace and Human Rights Centre in Kristiansand, seminars open to the public at the Falstad Centre, and a series of interviews at the National Library. In addition, two academic anthologies and a master’s course at UiA are being planned, and Langås is writing a textbook on war memories in contemporary literature.

She and her colleagues hope the project will lead to new insights into the way the war is presented today.

“Such aesthetic expressions must be recognized as valuable means of dissemination, but we must also remember that they are mediated by interpretation. To read and understand these representations in a critical way is one of the most important things we can contribute”, she says.